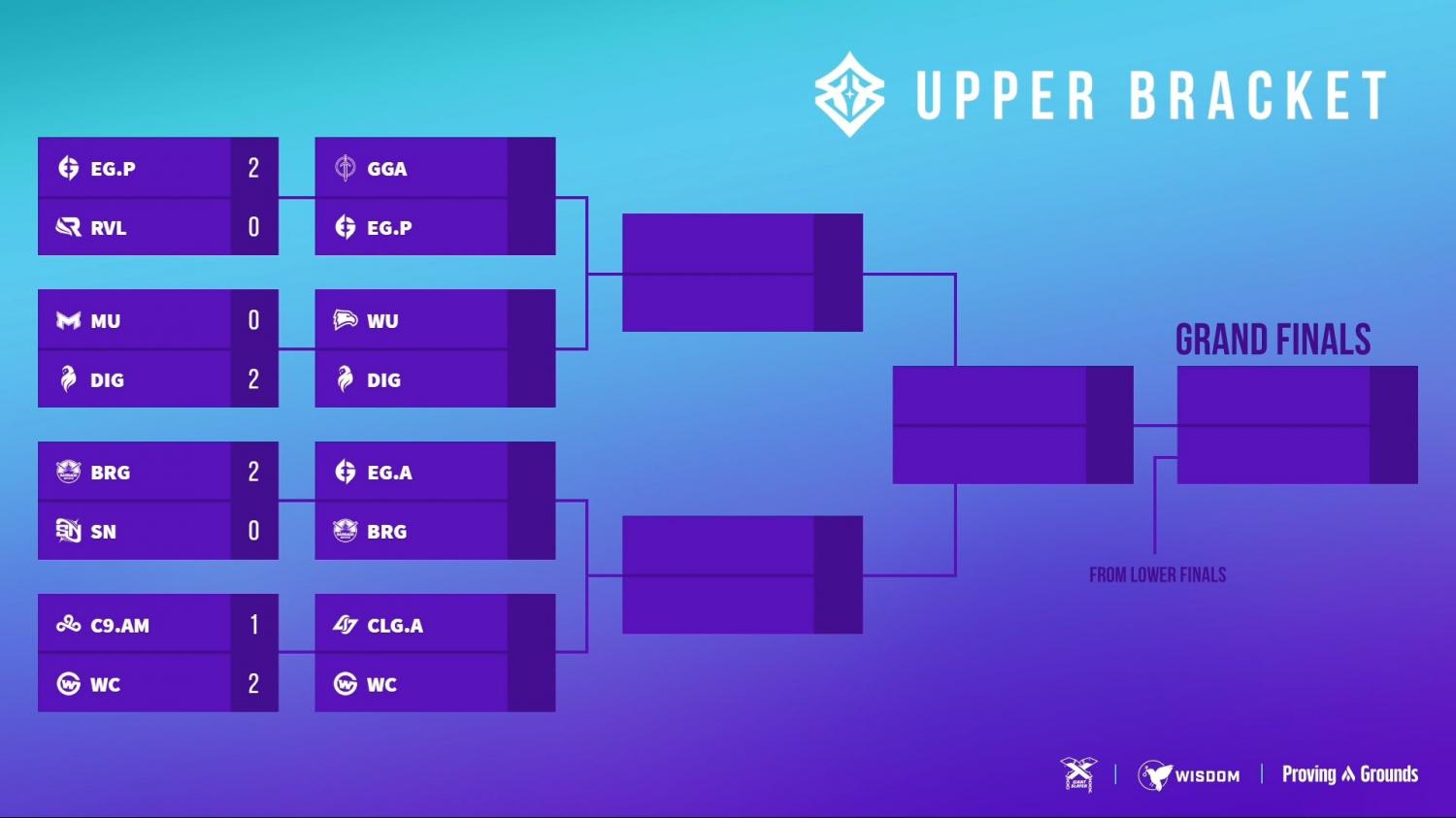 We've been looking forward to this day for weeks, and it's finally here! Day one was a rollercoaster of stomps and reverse-sweeps, helping flesh out and separate the competition in to a winner's bracket and a loser's bracket. Here's a brief summary!

A flash from EGP’s Mist on Alistar helped secure first blood on REV’s Sybr on Olaf during an early but ill-fated invade in EGP’s jungle. The game remained in EGP’s favor for the rest of the lane phase, but Revival put up a fight during several mid-game objective skirmishes in an attempt to close the gap. Revival’s draft, in theory, would out-scale EGP’s, but in order to out-scale, closing a 10k+ gold lead at 25 minutes would be necessary first. Unfortunately, it wasn’t meant to be. A hail mary from REV at a 26 minute Mountain Drake signaled their demise at the hands of EGP who scored an ace and nabbed the Nexus one minute later, ending the game at 27.

Much the same as the first game and a fairly clean sweep, EGP closed this game with 4 drakes, 6 towers, and a 13k gold lead against Revival. A good effort on Revival’s part, but it was not meant to be.

Supernova’s superior lane phase and early game objective control was unfortunately not enough to see them through to a win. Things looked hopeful as Supernova’s Array on Jinx collected a whopping 5/1/1 at 15 minutes. Barrage’s kill-spread was a little more dispersed between players but still even with Supernova's. Barrage pulled ahead during a dragon fight at 16 minutes and maintained a smooth lead for the remainder of the game. Their consistent, controlled gameplay was rewarded when they ended the game with a 13k gold lead and a W at 30 minutes. The highlight of this game for Supernova was their ADC Array’s near perfect performance, but unfortunately Barrage’s overall team synergy won over.

In Game 2, Supernova, seemingly demoralized, didn’t have the early game like they did during Game 1. An 11 minute Rift Herald on the side of Barrage signaled the beginning of the end, in a painful downward spiral for Supernova. Supernova’s ADC Array on Jinx once again proved to be a bright light in a dark game for SN, but BRG Gorica on Kai’sa was an unstoppable force, choosing violence over and over until there was nothing left of Supernova. We heard the credo “kill Gorica, win the game” earlier in chat, but perhaps the message had to be delivered by Gorica himself for us to truly understand the implications. This game ended with 6 - 28 kills in Barrage’s favor. Barrage’s endgame KD was also something to behold -- Gorica on Kai’sa with a monster 11/2/11, apa on Orianna with a monstrous 7/0/16, PCL on Aatrox with 6/0/9, Fanatiik on Skarner at 2/1/16, and Winter on Galio ending with 2/3/20.

Forty five minutes before the start of the Giant Slayer Spring Gauntlet game between Mirage and Maryville University, Dignitas announced that they would be partnering with amateur team Mirage. We had no idea what implications that had at the time, but we now realize the 10 days we haven’t seen Mirage in a tournament were spent in some sort of hyperbolic time chamber. Mirage entered this game an almost completely unrecognizable, well-oiled machine, taking the first W from Maryville with a 19 - 3 kill spread and a 13k gold lead. MIG’s Meech on Cait ended this game 6/0/10 with a 700 gold bounty, a perfect game for this ADC reborn. Partial credit to Meech’s success can go to Digrage’s King, who had an impressive support game on Bard -- ending 1/0/15. A stable, confident ADC with an aggressive roaming support is a gift that many teams have yet to master. Mignitas left everyone speechless after Game 1, wondering what kind of bloodshed to expect in Game 2.

Migdig kicked off Game 2 with first blood for their top lane Dragoon on Darius. Dragoon has jokingly been called a Darius one-trick because he’s one of the indisputable dunkmasters in all of NA. It seemed like a joke at the time, but allowing Dragoon to lean in to their power-pick was the catalyst for Maryville’s defeat. Maryville did pull ahead for a brief time during the lane phase, but were quickly shut down by DIG Dragoon’s aggressive presence on the map. Mirage’s jungler Hyami -- Amateur twitter’s resident Master of Crepes -- had a perfect game on Skarner, ending at 2/0/18. Hyami has been in the shadow of MIG’s former jungler Hunter, but we can definitively say they’ve paved their own way after these two incredible games.

Although suffering two losses and moving to the loser’s bracket for one more shot at redemption, Maryville didn’t simply roll over -- it looked as though they were slated to win during the mid-late game transition, but unfortunately DigMig’s superior rotations, Darius draft, and team synergy won this game.

Opting for the Doinb special, C9AM’s mid, Captain Shrimps, went for an innovative but strong Rumble pick. However, it likely wouldn’t have mattered what or who C9AM sent mid, because Wildcard's mid Xeno on Orianna was an untiltable titan of shockwave excellence. The Rumble x Orianna could have been a fun matchup in retrospect, but Xeno wasn’t there to have fun or make friends, Xeno was there for blood and destruction.

Things were going well for C9 Amateur at the 22 minute mark as they began to carve out a gold lead:

The 5 man shock-wave from Xeno at 26 minutes has already become an iconic moment for Wildcard. The legendary mid skirmish began with a speedy engage from WC Panda on Udyr and ended with Xeno firing off a 5 man shockwave seconds before falling to Captain Shrimps’ Rumble. This was the moment the gold lead fell comfortably in WC’s favor as they spring-boarded Xeno's full ace into a Baron, giving them monstrous momentum. WC Xeno wasn’t happy with one incredible shockwave and popped off one more time, helping his team net another ace and clean up the nexus a cool 4 minutes after the first Xeno Ace.

The aggression with which C9AM returned to Game 2 was impressive. With 4 kills on the board for C9 (two of for C9’s Wixxi on Lucian) at 8 minutes, they seemed like a completely different, confident team. Superior rotations had C9 running circles around WC in all lanes for the entire game, with WC never quite making up in resources or objectives. At 18 minutes, the damage graph looked pretty bleak for WC:

One of the players of note in this game was C9 Breezyyy's terrifying roaming Alistar, taking the initiative to be a part of nearly every fight, if not being the sole initiator. Breezyyy was acutely capable of finding his team superior terrain and conditions upon which to engage over and over. C9’s ADC Wixxi kept a very controlled, consistent performance in bot lane throughout, ensuring the leads created by Breezyyy’s roam would be secure. This game ended in a terrifying reverse sweep with 2 - 26 kills and 0 - 9 turrets and a whopping 16k gold lead.

Wildcard Panda’s Udyr has been essential to WC’s success and he was up for a rough start with C9AM’s eXyu on Rek’sai out-jungling for two early game kills. WC’s superior early game draft kept them even in gold despite these skirmish losses. Both teams’ early game aggression made for a lot of fun, efficient ganks, with a 7 - 7 kill score at 12 minutes, expediently ushering in the end of the lane phase. Wildcard took a lot of care to roam in packs, finding many picks against C9AM in their jungle -- a jungle that WC’s Panda on Udyr seemed to completely control from the mid game on. As a result, Wildcard was able to secure a 21 minute Baron, and C9's loss of map control, of their jungle, of the game would signal their demise. Wildcard decided to make it spicy and run it all the way down mid, securing a 24 minute win against Cloud9 Amateur. A 14k gold lead, 0-7 towers, 15 - 25 in kills -- Wildcard may have suffered an immense loss in Game 2, but showed up for Game 3 in a big way.