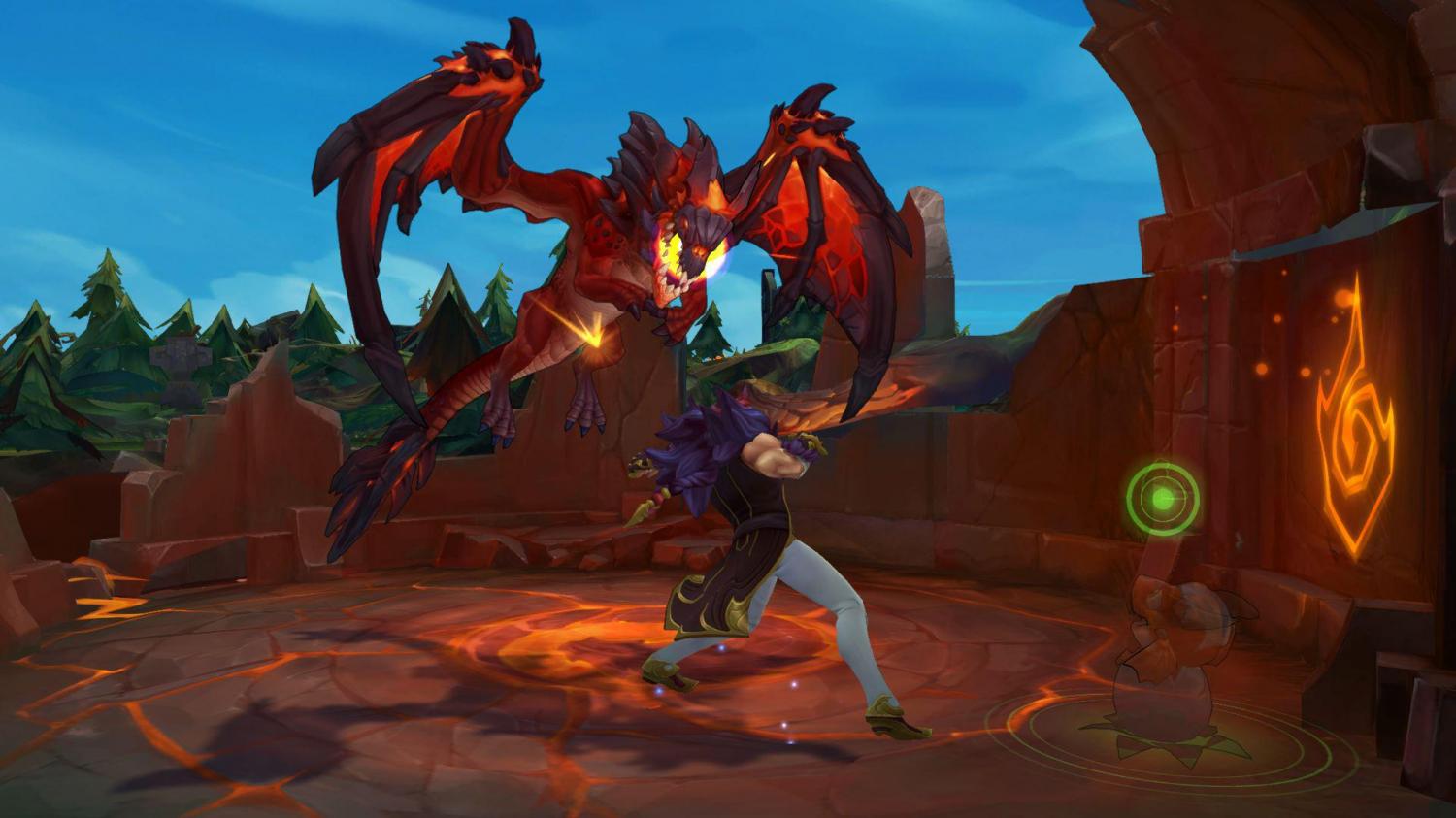 Fun fact according to our casters, Yunbee went to medical school, but started playing League of Legends more during COVID? The more you know!

This game started and ended rough for GGA, with first blood going to EGP Srtty on Sion vs GGA Tally on Renekton. As the game progressed, EGP’s superior sense of lane/wave management in tandem with objectives became clearer and clearer. GGA’s RoseThorn on Skarner seemed like a strong pick at first glance, but EGP’s composition in Srtty on Sion, Tomio on Gragas, and Mist on Alistar limited his ult’s options in a way that essentially negated Skarner’s usefulness late game. There was a really neat moment of calm, collected brilliance from GGA around 18 minutes where they patiently zoned and strategically forced a recall from EGP to lock down a drake, but too little too late.

Incredible performance from EGP’s Shiro on Tristana (ending 10/1/7) and EGP’s Mist on Alistar -- but more on this combination in Game 2.

Everyone -- and I mean everyone -- questioned EGP’s ADC Shiro on their pick of Samira during draft. Casters, chat, everyone thought that maybe Shiro hadn’t read patch notes, wasn’t aware of the nerf -- it seemed silly to raise these questions, but it also seemed silly to pick a champion that felt so out of favor.

Of course, everyone would end up eating their words in this game as EGP Shiro not only dominated as Samira, but won this entire game for Evil Geniuses Prodigies.

Things looked REALLY bright for Golden Guardians Academy -- a pre-6 first blood went to GGA Yunbee, who was sporting one of their stronger picks, Twisted Fate vs EG Aspect on Orianna. This was quickly followed up by another successful kill from GGA Tally (Who seemed to have a renewed sense of confidence in this game) vs EG’s Srtty on Gragas. More beautiful play from the whole Golden Guardians Academy team really had us hopeful in the first 20 minutes of the game -- a perfectly timed top dive with a Zhonya for GGA’s RoseThorn on Lillia and a  Goredrinker for GG’s Tally on Renekton  -- but it wasn’t meant to be. EGP managed to eek out a small gold lead around 25 minutes, but stole an absolutely commanding lead as EGP’s Shiro on Samira took matters into his own hands. Two team fights, two Samira ults, and two triple kills, all in the span of minutes, allowing EGP to create the tempo to summarily end the game at 33 minutes.

I cannot emphasize enough how EGP Shiro’s sense of engagement and punishment was essential to this win. Ending the game at 11/3/10 wasn’t a mistake or a lack of effort on GGA’s part -- it was all pure skill and strategy from Shiro.

Golden Guardians Academy should be proud of their performance as this was anything but a stomp with EGP winning with a 6k gold lead. GGA did good, but EGP Shiro did better.

Barrage absolutely dominated the early game, with Evil Geniuses Academy unable to compete from beginning to end, with the MVP of this game being Barrage’s apa on Cassiopeia.

One of the most glorious moments of this game was Barrage’s Winter on Alistar sniping an Ocean Drake from Evil Geniuses Academy -- the drake had 3 health.

Evil Geniuses Academy zeroed in on a potential edge to find a win in a late game Baron, but BRG’s PCL teleported in right as his Gnar bar filled up -- allowing him to absolutely destroy an already low health Evil Geniuses Academy, nabbing Barrage the Hand of Baron buff and wiping EGA at 24 minutes. BRG almost used this to catapult to the Nexus, but took a little extra time to grab Ocean Soul and circling back around to secure a win at 30 minutes.

While the credo “Kill Gorica, win the game” still rings true here, the real MVP was a roaming Cassiopea from BRG’s apa -- ending the game at 7/0/12.

An incredibly close game and an admirable performance from Barrage but the game would be secured by Evil Geniuses Academy and an incredibly well controlled performance in Game 2. It remained fairly matched until a gruelling 30 minutes, with Evil Geniuses Academy finally destroying Barrage at Ocean Drake. While BRG did manage to snag the Ocean Soul, EGA wiped four members at Ocean Drake and moved on to Baron at 31 minutes. Unable to effectively siege BRG’s base on this round of Baron, EGA opted to reset and prepare for the Elder Drake fight. A perfect flank from EGA’s TonyTop on Camille at Elder Drake would find an ace on Barrage and the W.

This game helped highlight Evil Geniuses Academy mid Jojopyun on Ryze, ending the game at 6/5/12, but more notably, he was in nearly every team fight and a roaming menace to help EGA out-scale and win.

Wildcard popped off early game with their ADC TeamLukee showing why he has the most aggressive fanbase in twitch chat. An early gank from Jungler WC Panda on Hecarim secured first blood for WC TeamLukee on Kai’sa and an assist for WC Support Daption on Sett. Speaking of WC Daption on Sett -- this game was their time to shine, but unfortunately WC Panda on Hecrim ad Daption’s Sett wouldn’t be enough to carry Wildcard to a win. Things started to go downhill for Wildcard around 9 minutes, when they were nearly wiped by CLGA at Rift Herald. This was the moment CLGA pulled ahead with Wildcard aggressively falling in-step. Both teams displayed an excellent push-and-pull for important objectives and a good sense for what rotations would serve them best. With CLGA’s slightly better lane phase, they were able to pull off an ace at Baron at 24 minutes with some superior technical teamfight skills. This was the catalyst to allow them to end the game and take Wildcard’s nexus.

First blood went to CLGA’s top laner Thien on Gangplank vs WC’s top laner Qwacker on Renekton. This, of course, is the CLG organization’s first blood curse, signaling that they would not be winning Game 2.

CLGA’s early game looked really hopeful, especially CLGA’s mid laner rjs on Orianna at 7 minutes at 2/0/1 with a 150g bounty. However, Wildcard’s Support Daption on Rell secured a vicious teamfight on bot lane at 14 minutes that seemed to turn the tide for Wildcard going forward. Securing all of their lanes aggressively, WC’s Jungler Panda on Hecarim and their Mid Xeno on Twisted Fate worked incredibly hard to give everyone the lead they needed to secure the W.

CLGA’s final attempt to find a path ahead ended at the Ocean Drake at 23 minutes, where they attempted to sneak the objective while Wildcard was occupied at Baron. Unfortunately, CLGA was caught out by Wildcard’s heroic dynamic duo, Panda and Xeno. Using these objectives, Wildcard Gaming pushed through CLGA’s nexus.

This was an incredibly close game that eventually closed in CLGA’s favor, but not without an absolutely vicious fight from Wildcard Gaming. Both teams pulled ahead by slight margins at different points in the game, but it wasn’t necessarily due to effective outplays, but more as a result of small but punishing losses stacking up on each side. Wildcard maintained superior objective control and map presence for the majority of the game, but CLGA managed to keep up in higher creep scores in Top with Thien on Jayce, Jungle with Griffin on Udyr, and Mid with rjs on Victor.

At 21 minutes, CLGA attempted to take Baron when a 3 Drake-stacked Wildcard decided to contest. During this fight, Wildcard was fractured and zoned by CLGA’s superior team fight, netting CLGA a baron despite only taking out Wildcard’s Jungler Panda on Olaf.

This game continued to be drawn out, with Wildcard securing two picks and attempting to stay evenly matched in gold with CLGA. Contesting Wildcard for the Infernal Soul, CLGA with a single Mountain Drake to their name once again manages to zone, fracture, and poke down Wildcard until they no longer had a claim to the Infernal Drake, losing them the Infernal Soul.

The game didn’t end there -- another Infernal Drake spawned and went to CLGA after a teamfight ace against Wildcard in mid right before spawn. With 6 drakes on all teams, 3 for each, the game at 33 minutes would inevitably end with the 7th drake. Wildcard’s redemption came when they were able to nab the Infernal Soul but at what cost? Another lost team fight to CLGA, another full wipe for Wildcard, and the final remaining members of Counter Logic Gaming, Hooks, Thien, and Katsurii racing to the nexus to take it down. Thien falls and then Katsurii, leaving only Hooks on Nautilus to get the last two hits of the nexus, becoming the hero of this win for Counter Logic Gaming Academy.

With a relatively serene 20 minutes, it was difficult to tell from the draft or the gameplay who would come out ahead. With Dignitas Mirage’s incredibly unexpected stomp on Day 1, nobody really knew what to expect from them in the face of the King of College, Winthrop University, who had recently dethroned Maryville University.

Dignitas Mirage began this game with an unsuccessful invade level 1. First blood went to WU top HyBriDZz. While WU did remain ahead for the entire game, it was relatively close, within 2k gold, up until Baron at 35. Things were tense; each team had three dragons each, completely evenly matched in gold and resources. This is when DigMig’s Jungler Hyami on Graves sniped the Baron right out from under Winthrop University, allowing DIG’s ADC Meech to wipe WU from the map. A few minutes later, WinU secured the Ocean Dragon Soul with the help of some effective vision, insane jungle picks, and a shockwave-heavy teamfight from mid laner Doxa on Orianna. This dragon ace is what sealed Dignitas Mirage’s fate and allowed Winthrop University to storm their nexus.

Unfortunately, our new, exciting upstart in Dignitas Mirage will have to fight their way through the loser’s bracket. Game 2 was much harder for them -- they lost this one to Winthrop University’s incredibly aggressive early game that snowballed uncontrollably into a dominant win. Some vital macro play mistakes included inconsistent lane management in tandem with objectives early game and a lack of vision tracking of WU’s incredibly slippery jungler FrostForest on Udyr. It feels like Dignitas Mirage struggles most with their own mental -- they became their own worst enemies as the game went on, making mistakes we know this team can overcome in future games. Fostering a good mental is one of the hardest parts of League of Legends.

Dignitas Mirage decided to salvage their pride and forfeit at 26 minutes to Winthrop University. The final score was 23 to 6 kills, 4 dragons to 0, 4 towers to 2, and an 8k gold lead.