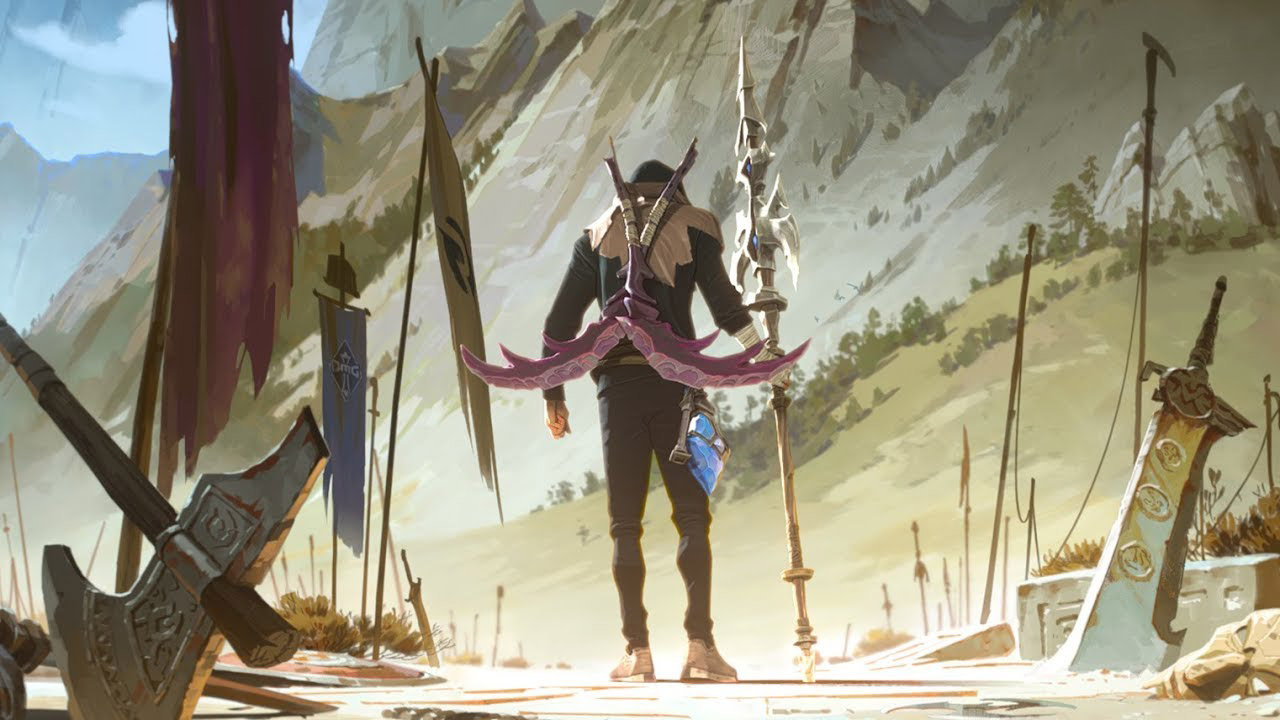 Wildcard’s Qwacker has been a bit timid in previous games on Renekton, but after this game, we can confidently say that the timid Qwacker we once thought we knew no longer exists. Wildcard and Revival met on this rift both confidently showing an effective lane phase. Although Revival seemingly pulled ahead during the early game, Wildcard always seemed to be in control. Whether this is due to the fact that most of their Ls felt like artfully laid traps for bigger future gains, or if watching Qwacker full-on tank Revival’s entire team for what felt like an eternity in the dragon pit, Wildcard was indeed always in control of this game.

This game closed out at a speedy 23 minutes with a 10k gold lead.

An absolute knock ‘em, drag ‘em out brawl of epic proportions, before we even hit the 5 minute mark, 6 deaths had already happened -- an even spread of 3 on all sides. Little did we know that this 40 minute and 32 second slapfest of seven dragons and two barons.

Qwuaker’s insane play at 11:15 at the dragon pit was so hype, it’s hard to describe in words exactly how much finesse and skill it took. Honestly, peep the clip from Giant Slayer’s League of Legends tweet here to get the full, nail-biting experience.

If you're going to watch any game from today, I highly recommend this one. The teams remained evenly matched for the entire game, pushing and pulling and brawling over every single objective with great finesse. With games that go beyond 25-30 minutes, it stands to reason that whatever team wipes that ate in the game will lose, and eventually that was Wildcard at the dragon pit getting wiped by Barrage, followed swiftly by and a second loss at Baron, allowing Barrage to siege Wildcard's nexus and close out this ridiculously fun game. The grand death total was 66, meaning nearly two kills took place every minute. What a ride.

Wildcard really left no room for survivors in this one. The first ten minutes seemed relatively evenly matched, which is sensible because both of these teams have proved that they thoroughly understand push-pull dynamics, lane phase flow, and objective tempo.

Wildcard popped off mid game first by leveraging objectives -- towers and dragons. Once they had accumulated a decent lead, team fights began to fall in their favor over and over. A final bait at Baron really sealed the deal for Wildcard as they aced Revival, swung down and grabbed the Mountain Soul, and casually made their way to Baron with the knowledge that Revival would not be able to contest it. Revival’s only chance for redemption would come in the form of Elder Drake, and with Wildcard’s Jungler Panda caught out by Revival's Jungler Sybr on Hecarim, it seemed viable. Unfortunately, Revival did not account for the rest of Wildcard, who could be found securing a second Baron while WC Panda distracted Revival to their own detriment. Wildcard used this to catapult right through Revival's delicate Nexus, knocking Revival out of the Tier 1 Giant Slayer Spring Gauntlet.

A relatively harmonious lane phase was ended by a swiftly rotating Barrage, forcing Maryville to answer over and over to Barrage’s aggressive propositions. Barrage maintained strict map control using these rotations that Maryville struggled to recognize, making them unable to mitigate. As a result, Barrage created a slow but consistent lead with three dragons, 5 kills, and a 2k gold lead at 18 minutes.

The Infernal Drake fight at 18 minutes was so prolonged that BRG’s PCL on Gnar was able to re-enter the fight with the full Gnar Bar -- twice. Being able to manage your enemy’s resources by not engaging in protracted skirmishes is hard to time, and Maryville continued to struggle under these conditions. Barrage nabbed an Infernal Drake and stood confidently at Soul point, forcing Maryville to play around the dragon pit or give up the soul. Maryville did a great job of safely pushing lanes between critical objectives, but Barrage made it a point to bully and zone Maryville at every opportunity, exploiting their willingness to retreat rather than wipe.

Mountain Drake Soul was the point at which Maryville University was unable to recover. Although Maryville only suffered a single death while initially contesting the Soul, their willingness to retreat and give up objectives had snowballed into their undoing. Eventually Barrage was able to bully Maryville University into a Baron dance, which they immediately attempted to disengage from but not before BRG’s ADC Gorica snagged a quadra kill from them.

With a quick reset, Barrage was able to siege with Hand of Baron and end this first game against Maryville, no Elder Drake required.

With a renewed sense of purpose, Maryville entered this game very clearly incentivized to win. Rushing an Ocean Soul at 25 minutes with 0 drakes left for their competitors, Maryville’s performance in this game gave us a peek into what they’ve been working so hard on in terms of team communication and synergy. Maryville University hedged a lot of bets that paid off splendidly, and any risks also felt controlled, calculated, and perfectly timed.

Challenging Barrage at 28 minutes at Baron turned out to be the last bet they’d need to hedge, allowing Maryville University to collect Hand of Baron and clean up the Nexus in one of the cleanest games we've seen in this Tournament so far.

We’ve been waiting for Maryville’s Jungler TheOddOrange to pop off and were delighted to see it in Game 3 before their elimination at the hands of Barrage. TheOddOrange’s commanding presence on Lillia helped set the tone for early game -- the first 12 minutes -- with an admirable 4/0/1 KD and a 4k gold lead. Setting up fellow Maryville University players like ADC EvanRL on Tristana and MU’s Support Shady on a classic Blitzcrank was their best bet, but it wouldn’t pan out for the former King of College.

Things took a grim turn when Barrage was able to turn on Maryville during a mid skirmish at 23 minutes to nab 3 kills, evening out the gold and kills with almost no discernible lead for either team. Dark horse and ADC for Barrage Gorica always keeps his head down and seems to scale monstrously around 20 minutes, and this game was no exception. Bullying Maryville out of favorable terrain near Baron saw Barrage securing a 25 minute Baron and another Infernal Drake.

Maryville spent the remainder of this game on the retreat, aced at another Baron at 33 minutes, Barrage nabbing the Infernal Soul. Barrage, exercising a lot of care and patience to close this out, opted not to siege Maryville’s base with Baron. A few resets and a handful of picks later, Barrage was able to break into Maryville University’s base, closing this chapter for Maryville’s path to Proving Grounds.

Games 1 and 2 were not able to be broadcasted, however we were thankfully able to catch Game 3 on Giant Slayer Spring Gauntlet caster Raafaa's twitch channel.

Both teams seemed to have different priorities; for Supernova, it was roaming ceaselessly for blood and kills. For Dignitas Mirage, it was dragons and towers. While the winning strategy would sensibly be with dragons and towers, Supernova’s bloodthirsty rampage saw them through so many critical team fights that you had to wonder if they had actually managed to make it worth the objective loss.

A 21 minute Baron dance left Dignitas Mirage retreating to lick their wounds and Supernova too bloody to take the Baron. It felt like Supernova didn’t necessarily care who got hurt as long as their enemies fell. Their willingness to throw themselves at Dignitas Mirage over and over very clearly began to affect DIG’s confidence and willingness to engage. The only member of Supernova not completely unhinged with bloodlust was their support Julien on Thresh, who kept his head about him long enough to peel and protect SNV’s Array on Jinx. This spot of strategic clarity allowed Array a 7/0/2 KD and a 600 gold bounty at 25 minutes in the game. All of Julien’s hard work keeping Array alive came to a head when Array fired off a Super Mega Death Rocket Baron steal for Supernova.

After the Baron steal, Dignitas Mirage began to focus SNV Array on Jinx, whether out of revenge, a recognized necessity, or both, we'll never know. When Dignitas Dragoon landed a MASSIVE critical Powderkeg on SNV Array during a mid skirmish, Dignitas Mirage finally had an opening to rush the nexus.

We regret to announce that the incredible Amateur competitor Supernova has been eliminated from the Giant Slayer Spring Gauntlet, while Dignitas Mirage clings to life in the lower bracket.

Due to a loss of internet, Cloud 9 Amateur had to forfeit their match vs Golden Guardians Academy. The team and players are very hard working and will have another opportunity at the Last Chance Qualifier to show their skills.

I’d like to close this out with a thank you to the casters, Raafaa and Smax, for broadcasting the DIG v SNV Game 3 on their own time. Dignitas Mirage and Supernova are two very hard-working teams, and the players deserved the kind of hype and love you gave them during this game. A small group of fans, staff, and friends huddled around Raafaa’s twitch channel and got hype for every play, every juke, every steal. It was magical and embodied the spirit of Amateur, which is ultimately just a bunch of ragtag hooligans trying to share with the League community at large what’s so wonderful about the Amateur community, win or lose.