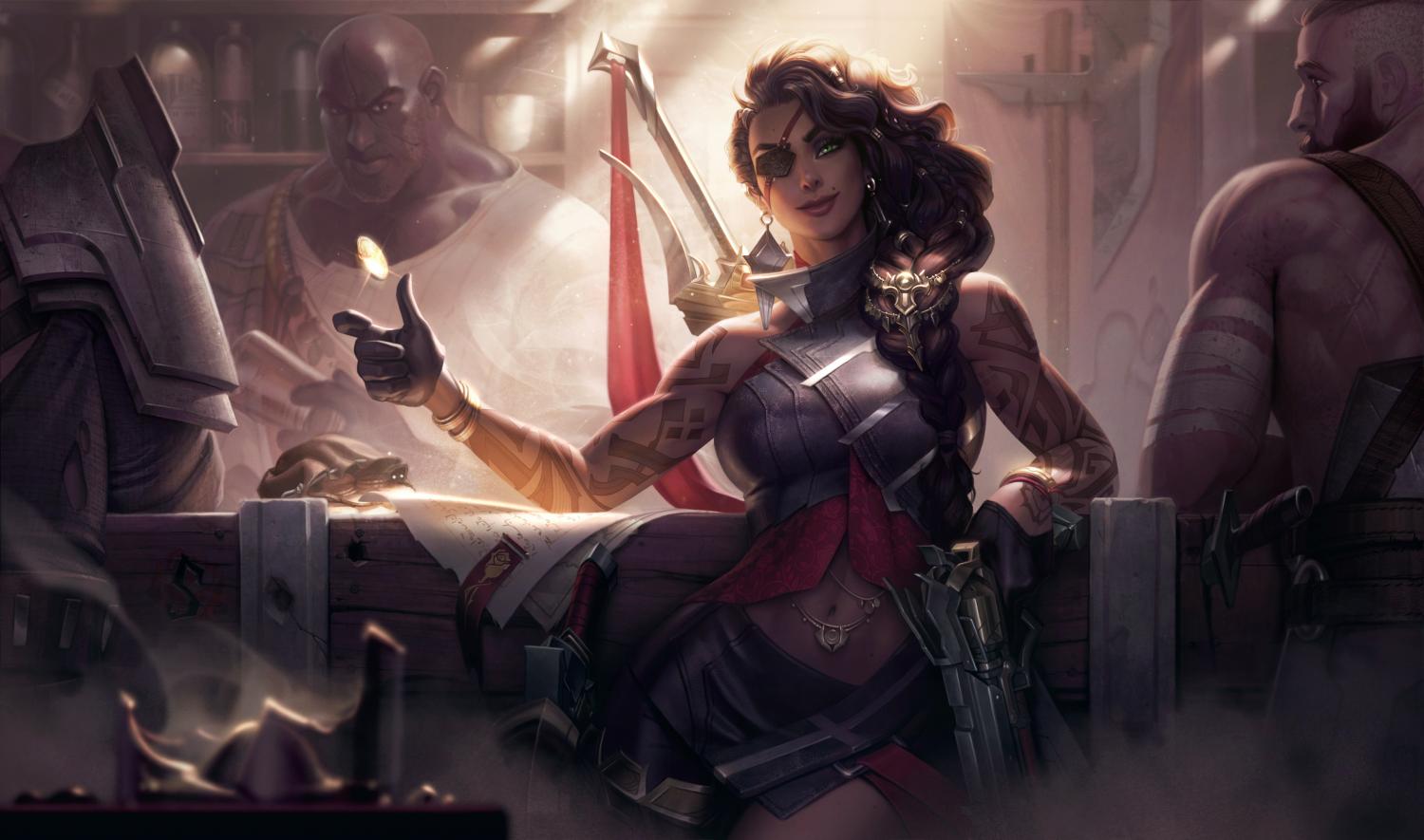 Some ill-fated invades resulted in a disastrous early game for Winthrop University, an early game from which they would never recover. The combination of EGP’s Srtty on Gnar and EGP Tomio on Olaf really helped rob Winthrop University of resources and focus. While Winthrop was salvaging their top laner HyBriDzz on Sylas, EGP’s Tomio was collecting objectives left and right, moments after spawning. To add insult to injury, EGP’s absolutely legendary ADC Shiro was already 5/0/3 with a 400G bounty at 20 minutes. As if Winthrop didn’t already have enough problems, EGP’s Aspect on Azir was crushing one of Winthrop University’s best players, Doxa, on Syndra.

An extremely tumultuous early to mid lane phase snowballed quickly out of Winthrop’s control. Losing every lane seemed extremely demoralizing, but there was one member of Winthrop University who kept it together -- Saskio on Jinx, sniping the first Baron of the game from Evil Geniuses Prodigies. While it didn’t net Winthrop University the W, it was a satisfying form of retaliation.

To say that EGP’s Tomio on Olaf was running circles around Winthrop in this game would be an understatement. This is one of the most excellent examples of how KD is rarely a good indicator of a player’s contributions to a game, especially in positions outside of ADC. Tomio had a handle on nearly every aspect of map control, but ended the game 3/1/6, a seemingly stark contrast to EGP ADC Shiro’s monstrous 10/0/6. Being able to control map flow and objectives is even more critical than nabbing kills for gold -- but of course, one is much flashier than the other. And boy, did this game get flashy.

The 23 minute Baron was merely part of EGP’s clean, perfectly executed plan. A plan that would end in the Giant Slayer Spring Gauntlet’s first Pentakill of the tournament. EGP Shiro on Samira absolutely devastated Winthrop University at 27 minutes, executing a perfect Pentakill and ending the game.

One of the thematic strengths of Evil Geniuses Academy is their ability to play around and to objectives in the early and middle stages of the game. EGA seemed keen on strategically avoiding messy skirmishes unless there was something more at stake in this game. One of the strengths of CLGA, on the other hand, is their incredibly aggressive and effective team fight mechanics. When two teams have such starkly different playstyles, it often leads to a prolonged push-and-pull, which is exactly what happened with Game 1.

Evil Geniuses Academy ramped up the aggression and, instead of disengaging from skirmishes that could cost them waves and resources, leaned in. This may have to do in part with the fact that they won two out of their three lanes early on. EGA’s Tony Top on Jayce didn’t exactly win his lane, but he did showcase superior mobility and roaming. What is a lane but a prison for a roaming champion? EGA Shoryu on Xayah and EGA Mystiques on Rakan made for a beautiful combination to contest CLG’s Katsurii on Kai’sa and CLG Hooks on Rell. As far as mid lane was concerned, EGA’s Jojopyun vs CLG’s rjs was a messy back-and-forth brawl hardly in their control. It was more about junglers passing through on business and making a mess of things in mid lane.

Speaking of junglers, EGA’s Contractz put on the show of a lifetime on Hecarim, having a near perfect game, especially for someone in a role as tough as an engage jungler. We should also mention that CLG’s Griffin nabbed a late game Baron right out from under Evil Geniuses Academy as one final act of petty defiance.

While CLGA did indeed nab the W, this game was so close and so tense. Both teams did exactly what they do best, but CLGA’s confident team fight found purchase in late game death timers.

There was an early play that left me clapping like a delighted child that happened around 6 minutes: CLG’s Thien on Lulu in top lane vs EGA’s Tony Top on Renekton. CLG’s Thien was on the wrong end of a dive from EGA’s Contractz on Hecarim, but pulled off a perfectly timed level up and immediate Wild Growth -- not only avoid a death, but also grabbing a turret-assisted kill from CLG’s Contractz and Tony Top barely making it out alive. Level 6 diff! This is a bit deceptive though, because CLG Thien’s ability to respond to pressure top was about 25-75, considering CLG Thien also died to EGA Contractz before 10 minutes… twice.

EGA had a renewed sense of aggression and made some choice engagements that slowly but surely turned the tide in their favor. EGA historically struggles to maintain aggression and finish fights, especially around objectives -- they’ll pick them, retreat, and inevitably lose. Not so with Game 2. I feel like we don’t see the heroic ADC carry games of old anymore, but we got close with EGA’s ADC Shoryu on Kai’sa and EGA’s Mystiques on Nautilus, forever peeling and sacrificing for his ADC. Two quadra kills for Shoryu later and EGA sealed the deal and the nexus.

EGA Mystiques on Alistar put in WORK and carried Evil Geniuses Academy to victory. Less than a 2k gold disparity at 30 minutes, it became obvious that CLGA and EGA are two of the most evenly matched teams in the Giant Slayer Spring Gauntlet. Another tension-filled push-and-pull! Evil Geniuses Academy had such great target prioritization, especially EGA Mystiques, ensuring back line control in every fight. EGA and CLGA both did a stellar job of target prioritization in every fight, shutting each others’ ADCs down as often as possible. It became the battle for control as Big Damage wasn’t exactly present here. Every team fight seemed to start with which team could decimate the others’ back line.

A merciful Baron at 33 minutes by EGA finally released us from our tension-filled torment, allowing EGA’s Mystiques on Alistar to bulldoze CLGA’s Katsurii on Xayah, falling like a hero as his team rushed the nexus.

For Dignitas Mirage, we had Dragoon on Gangplank, Hyami on Lillia, DNA on Viktor, Meech on Jinx, and King on Rakan. For Golden Guardians Academy, we have Tally on Gnar, RoseThorn on Olaf, Dr. Yunbee on Seraphine, Prismal on Tristana, and Chime on Rell.

We were once again impressed by DIG Hyami’s performance -- he’s got so much potential and it’s important that we call out incredible individual performance regardless of outcome. While Dignitas Mirage ended their run at the Giant Slayer Spring Gauntlet today, they’ve made a massive impression on the amateur scene. Golden Guardians Academy has also had such a positive impact on fans and professionals alike with their massive strides in improvement. This game showcased both teams’ hard work over this spring season. If you’re going to watch one game from Day 4, this is the one I recommend.

While Dignitas Mirage’s ambitious kite-it-back composition didn’t work out, they did have several team fight wins. Unfortunately, executing the kite-it-back takes a fair bit of endurance that Dignitas Mirage hasn’t quite developed. Based on their growth in the amateur season alone, I believe firmly that they will arrive in a big way and high risk, high reward comps like theirs will become no sweat in the future.

Golden Guardians became a wrecking-ball-turned-bomb with Tristana at the top of their damage pyramid. Locking enemies down while hellfire rains down was the order of the day, with no escape in sight. Dignitas Mirage remained mostly fractured and unable to assemble as one unit, a necessary part of their composition’s success. Golden Guardians expediently exploited this and made for an efficient win.

Both teams made a big effort to focus their compositions around their ADCs: for GG that would be Prismal on Kai’sa, and for DIGMIG it would be Meech on Xayah. Things didn’t look amazing for DIG’s lane phase on bot, with GG Prismal on Kai’sa and GG Chime on Rell aggressively poking down DIG Meech on Xayah and DIG King on Braum. Using that priority, Golden Guardians were able to claim the first Ocean Drake and first blood.

Watching Dignitas Mirage come together to protect Crepe Lord Hyami’s difficult jungle pathing was heartwarming, and watching the lanes work together for priority to get Dignitas Mirage the second Drake showcased why this team has surprised so many with their improved play.

The same could be said for Golden Guardians Academy and the hard-earned improvements made in the 2021 season -- their newfound confidence in engages, the clear trust that’s been fostered between teammates. Both GG Tally on Gangplank and GG Yunbee on Orianna showed up in a big way, oppressing their opponent’s lane phase, making it extremely difficult for DIG’s Dragoon on Vlad and DIG’s DNA on Seraphine to retaliate later in the game. GG’s RoseThorn on Hecarim became MASSIVE during the mid-late game phase, further closing the gap between the two teams. Looking to waste no time, Dignitas Mirage surrendered at 27 minutes after GG Tally’s critical Powderkeg took out three members of DigMid, ending Dignitas Mirage’s run in the Giant Slayer Spring Gauntlet.

An incredibly unfortunate disconnection resulted in Wildcard being awarded the default win to move on to the semi-finals. We wish Barrage the best at the Last Chance Qualifier!