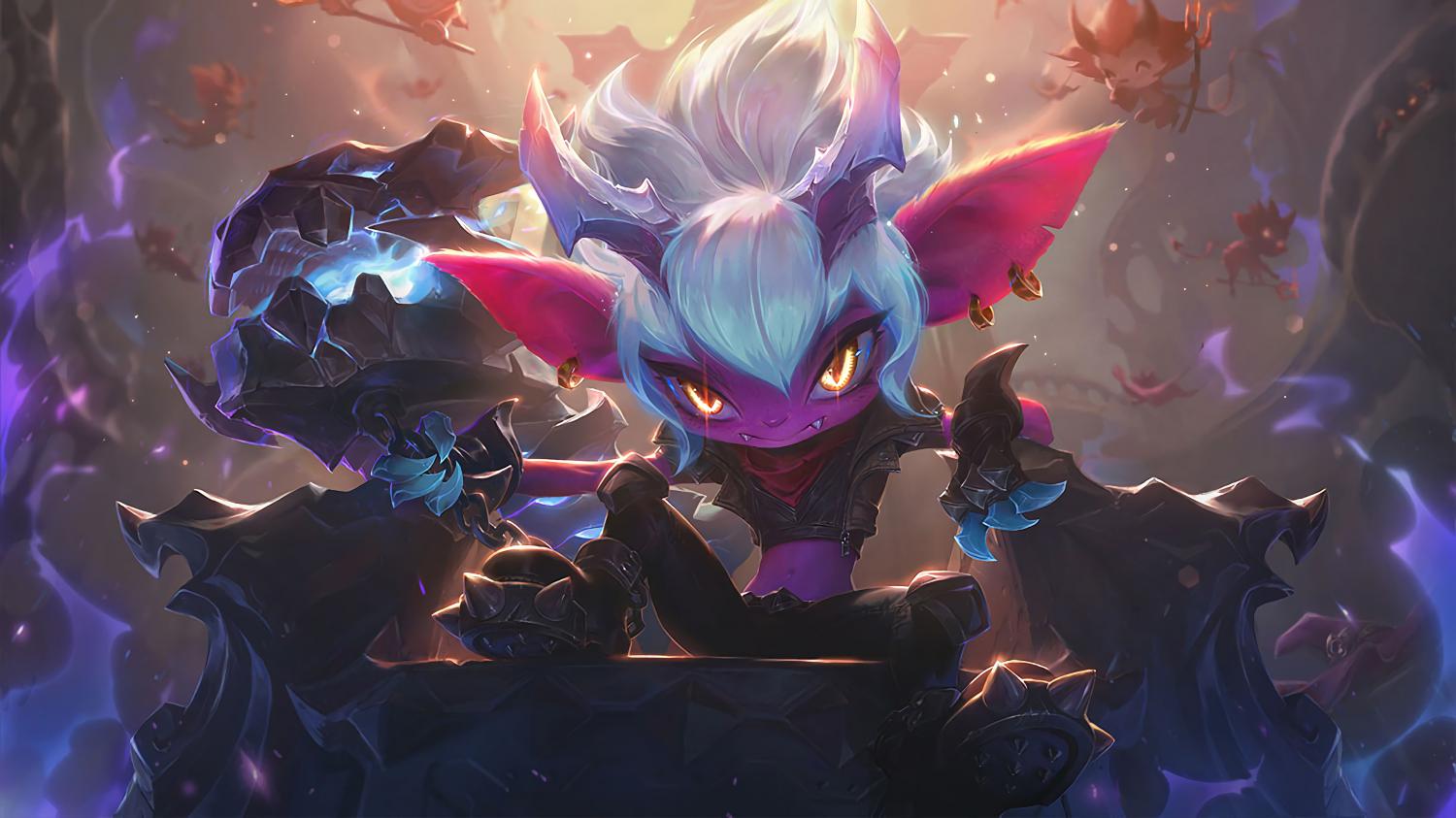 This 2-0 sweep from Cloud9 Academy felt a little unfair for those of us who have watched Dignitas Mirage’s meteoric rise up the ranks of Amateur. Everyone loves an underdog story and unfortunately these underdogs were unable to pull through and make it happen. C9 Darshan’s Tryndamere pick in the first game felt almost disrespectful -- those familiar with Darshan’s storied past know about his history of stomps on this champion in the AP days. To make matters worse for Dignitas Mirage, their top laner Dragoon was stuck with a Gangplank that was directly counter-picked by C9 Darshan. Dragoon has been a staple for Dignitas Mirage: a diverse hyper-carry that his team can dependably build around if necessary. He’s a really talented player to watch and we expect -- nay, demand -- that he’ll see some serious opportunities for the 2022 season.

MVPs for C9 Academy’s games were hard to pick -- in the first game, jungler Shernfire on Udyr had big expectations on his shoulders. C9 Shernfire performed so well in this game that DIG’s extremely formidable jungler Hyami on Skarner was often seen flustered and floundering, struggling to manage his timers and resources with C9 Shernfire running literal circles around him. In the second game, Dignitas Mirage put up such a vicious fight that Cloud9 didn’t really have any standouts; they won by the skin of their teeth.

Dignitas Mirage’s underdog success story isn’t over yet -- they’ll be heading to the lower bracket for one final shot at redemption against TSM Academy. Cloud9 Academy will be going head-to-head against Amateur upstart Zoos Gaming.

How is Evil Geniuses Academy doing post #LIVEEVIL civil war? They dominated versus their Amateur brethren in Evil Geniuses Prodigies and gave Flyquest Academy the same treatment in a 2-0 sweep. One of my favorite compositions during this game was EGA’s ADC Shoryu on a fasting Senna paired with EGA Mystiques on Tahm Kench. EGA Contractz put in WORK on Nidalee in both games. We expect this kind of performance from a seasoned LCS pro, and Contractz delivered. In the first game, EGA’s Contractz graciously let FlyQuest soak up spears and whittle a 33 minute Baron down to 5% health before wiping them and taking their nexus. Good Guy Contractz, to be sure.

FlyQuest Academy didn’t roll over and surrender the W. In the first game, Triple on Viktor stood out as the beacon of hope during their slow slide into the abyss. Viktor has been a staple in LCS, Academy, AND Amateur -- a hidden gem that’s seemingly invisible to priority focus in team fights, blowing up back lines, front lines, anything in his way. The second game was a bit more devastating, but FlyQuest Academy will get a second shot in the lower bracket vs CLG Academy. Evil Geniuses Academy will face Damonte’s sons in 100 Thieves Academy in the upper bracket.

Zoos and TSM delivered our first third game in a best-of-three. Audiences are growing tired of Jinx rocket Baron steals as was evidenced by the sarcastic, deriding tweets that followed TSM Cody Sun’s performance on a vicious Jinx. Despite the initial negativity, TSM Academy put forth their best effort. It wasn’t enough to see them through their first game as Zoos not only beat them, but out-rotated, out-objectived, out-laned, out-jungled them. Zoos Gaming’s rotations were both leading the map and following any advantages TSM Academy struggled to carve out. In the second game, TSM Academy came back with a vengeance, drawing on this loss to stomp the draft and pull out a disgustingly effective dive composition against Zoos. TSM Swordd on Galio was especially critical with a whopping 81% kill participation.

Game three was honestly over before it started. This draft proved how important it is to study the team you’re fighting against -- with analysts and coaches at their disposal, it’s surprising that TSM Academy allowed Zoos to pull Wukong AND Sivir. When the game began, they didn’t give Zoos top Allorim on Wukong the space and respect he deserved, and that allowed him to scale out of control and rally the rest of Zoos to a triumphant win. The dives were absolutely insane with Zoos Rahin engaging with Sivir’s On The Hunt movement speed bonus to catch and wipe out TSM Academy over and over. Allorim is clearly the shot caller, the carry, the leader, and the father of Zoos. Under his tutelage, this team has emerged victorious the first week of Proving Grounds. Zoos will be fighting it out versus Cloud9 Academy, while TSM Academy will terrorize the lower bracket versus Dignitas Mirage.

100 Thieves Academy and CLG Academy had an early game push-and-pull for their first game in Proving Grounds. Helmed by benched LCS pro Tanner Damonte, 100 Thieves Academy made their first win look easy by mid to late game. The first crack for CLG came in the form of out-drafting from 100T -- 100T Kenvi on Udyr locked down the whole map versus CLG Keel on Volibear. Two bears, two teams, but only one winner, 100T took CLG for all they were worth. Game two was a bit harder for 100T’s draft -- they clearly wanted an aggressive dive composition, but several fumbles during the early lane phase crippled their ability to follow through on their draft’s most basic mechanics.

Game three was so interesting in terms of draft, with 100T Damonte pulling a Renekton mid and making it clear to CLG that they would have to prevent him from hyper-carrying the game. Unfortunately for CLG, the first issue surprisingly arose with a jungle difference between CLG Keel on Nocturne versus 100T Kevi on Nidalee. At the end of the game, there was a 4 level difference between the two junglers.

CLG Academy put up a respectable fight as the 14th seed versus 100 Thieves on the 3rd seed. We’ll see CLG Academy again in the lower bracket versus FlyQuest Academy, while 100 Thieves Academy will go head-to-head against Evil Geniuses Prodigies.

Game one was off to a rough start for Wildcard’s star mid lane Xeno. In games’ past, Xeno has been a nightmare for other teams on Orianna and Viktor. Blowing up back lines and Shockwaving to turn tides, WC Xeno has done so much to impress us in the past, so the rough start -- 0/3/0 at 6 minutes -- didn’t feel like cause for concern. The real cause for concern arose during the remainder of the game as we watched an unbridled, uncontrolled, chaotic DIG Akaadian on Hecarim create too many unanswerable problems for Wildcard, netting Dignitas Academy the game one win. DIG’s Akaadian had a 100% kill participation percentage for over half of game one.

Wildcard emerged in game two vengeful and ready to sweep. Wildcard absolutely crushed Dignitas Academy with a 12k gold lead after everything was said and done. Win early, win game -- Wildcard showed so much aggression early on that it was impossible to imagine a comeback for Dignitas Academy at any point during game two. Wildcard’s aggression had taken Dignitas by surprise and netted Wildcard a well-deserved W.

With a relatively harmonious, even draft, game three came down to execution and strategy more than anything. Both teams have proved they’re immensely capable of executing exciting, effective team fight mechanics, but Dignitas Academy clearly has more strategic and late game macro experience. Two disgustingly effective performances from Dignitas Academy’s mid laner Yusui on Orianna and their ADC Spawn on Tristana helped guide them through the mid and late game to victory. We’ll be seeing Wildcard Gaming in the lower bracket versus Immortals Academy, while Dignitas Academy will move on to fight Evil Geniuses Prodigies.

No Org vs Golden Guardians Academy

No Org is the 7th seed to Golden Guardias Academy’s 10th seed. No Org is indisputably the Amateur favorite, especially since the disbanding of their rival and qualifying team Sola Fide. No Org proved deserving of this admiration, punishing Golden Guardians Academy’s missteps aggressively and offering them zero recourse. Game one ended with a 13k gold lead, 10 towers to GG’s 1, 15 kills to GG’s 5. A rough one, to be sure, but nothing to give up a series over.

Licking their wounds after the #LIVEEVIL civil war, Evil Geniuses Prodigies have their eyes on the prize and seemingly want to replicate that civil war for a second shot at redemption. A three game rodeo of anxiety-inducing proportions, it felt like this series could have been either team’s game. Evil Geniuses Prodigies emerged victorious and will go on to see what Dignitas Academy is made of, and Immortals Academy will get their final shot at Proving Grounds if they can make it through Wildcard Gaming.

The game everyone has been talking about, the triumphant 2nd seed in Team Liquid Academy against the 15th seed Amateur underdog Barrage. It's a quintessential David and Goliath story and a massive triumph for NA Amateur as a whole. Team Liquid Academy started game one with a sensible ban against Karma despite none of the members of Barrage being particularly fond of the champion this season, more likely on account of her being banned for most of it. A respect ban came out of Team Liquid Academy in the form of Tristana -- a signal to Barrage’s ADC Gorica that perhaps he posed a small threat to Team Liquid Academy’s incredibly confident team.

Game one felt close until a final, decisive team fight at 27 minutes. Barrage’s Gorica on Jinx emerged from the smoke with a triple kill, two nexus turrets, and a game one W. As for game two, Team Liquid Academy’s mental was truly wounded after game one. Losing to an Amateur team that they announced they were going to humble had crumbled Team Liquid Academy’s confidence, and it showed in game two. Barrage’s mid laner APA popped off on that same subtle Viktor that teams simply don’t seem to focus, while Barrage’s jungler Fanatiik showed targeted, selfless gameplay that helped carry his game through to the win.

Overall, Barrage’s humility in this game was truly a credit to their performance as a team. They knew they were the lowest seed in the bracket going against one of the highest seeds and they knew all of the projections were stacked against them. Showing immense maturity and strength, they pushed through Team Liquid Academy’s best and emerged victorious, showing the world that Amateur is a force to be reckoned with.