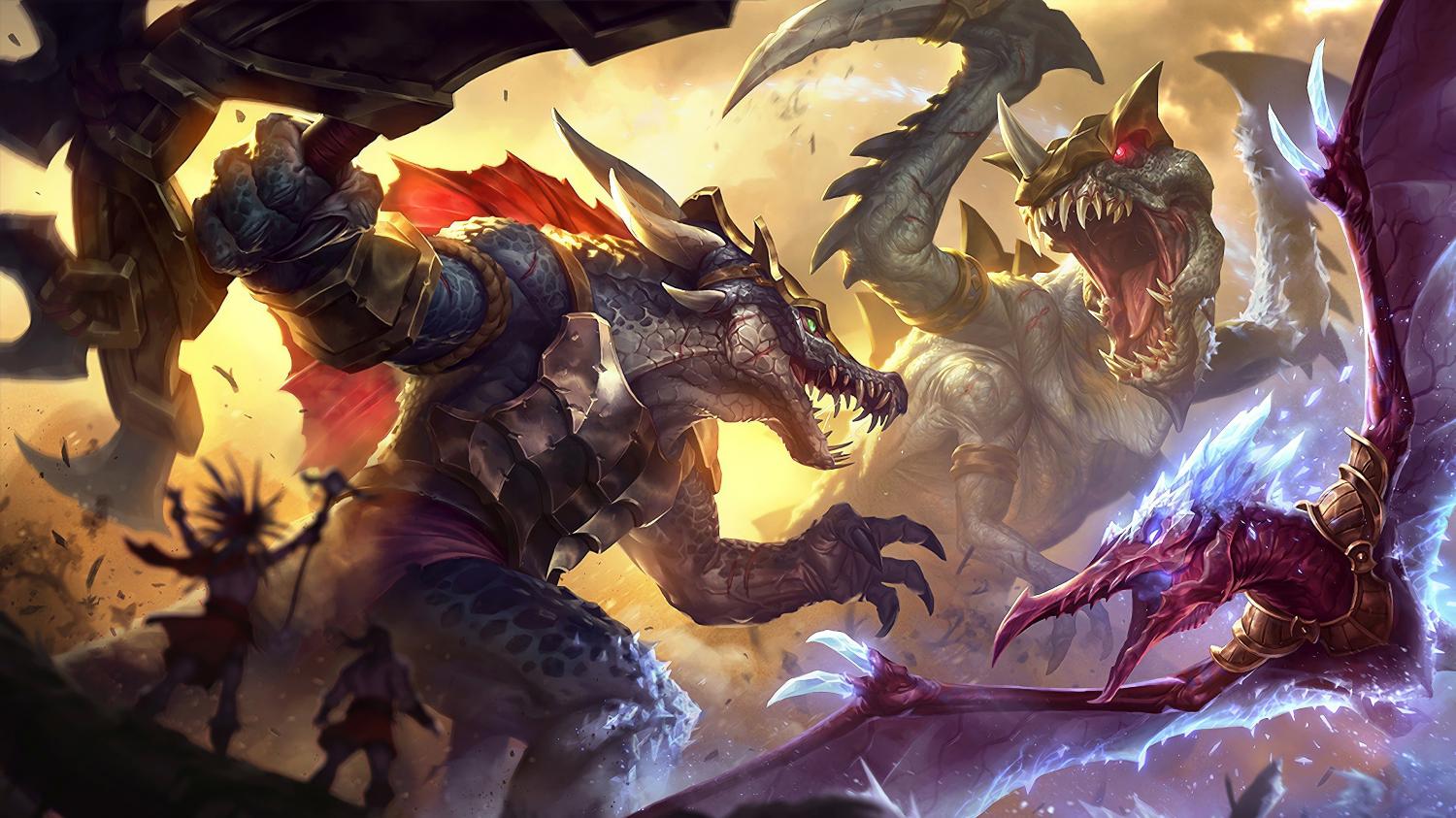 After their incredible performance in week one versus TSM, our expectations for Zoos Gaming were sky high -- maybe we jinxed it?

C9 K1ng took off on a very impressive Jinx in our first game thanks to his incredible support C9 Isles on Rell doing the very most to roam, peel, ward, and zone Zoos Gaming early on. Both supports put up a formidable fight in game one -- Zoos Rhino (Thresh) did a great job during team fights zoning key players and burning C9 Academy's summoner spells. C9 Shernfire on a hard-scaling Mundo freely roamed through Zoos RBM’s jungle, while C9 Darshan on Gangplank made farming difficult for Zoos leader and team hyper-carry Allorim on Cho’gath. With Zoos RBM on Skarner unable to find a successful lane to feed, every attempt to contest objectives or help his team’s lanes became more and more punishing for Zoos. Cloud9 Academy hasn’t played a lot on stage since 11.3, so it was likely tough for Zoos to get a read on their current strategies. With game one out of the way and the necessary information downloaded to the Zoos mainframe, the expectation was that Zoos would make a strong comeback.

Zoos did a great job utilizing team chemistry in game two; the individuals sacrificed for the whole. Zoos RBM on Kha’Zix demonstrated a willingness to give up farm and individual success to take advantage of time-sensitive opportunities to push his team ahead. It shouldn’t feel remarkably uncommon for teams to work together in a team game, but we do often see these younger teams prioritizing the individual over the whole. Not so with Zoos. Paired with an impressive Syndra carry from Zoos DarkWings, RBM was able to play around this lane and pull a win out for Zoos.

Without a significant lead for Zoos Gaming to feed their dive composition, the decisive factor in game three came down to their inability to pull off the team fights needed to win the game. They kept up with C9 in terms of farm, kills, and objectives right up until the end -- but this was often due to mistakes on the side of C9 Academy rather than flawless execution on the side of Zoos Gaming. We know this team is incredible, and we’re looking forward to them challenging the lower bracket in a big way.

This wasn’t the performance we’re used to seeing from 100 Thieves Academy. 100T seemed particularly prone to tilt and struggled to pull themselves out from the beginning. To 100T's credit, Evil Geniuses Academy does feel more polished, professional, and confident since their 2-0 sweep of FlyQuest. Ultimately, these games are about individual players showing that they’re capable of massive growth and that they can work well with others -- the ultimate cornerstones of promising developmental talent. 100T Tenacity on Volibear did demonstrate this capacity despite his team losing these games 2-0 to Evil Geniuses Academy. There’s also something to be said about how consistently dominant LCS veteran jungler Contractz has been all season on Evil Geniuses Academy. He obviously needs a challenge, and he hasn’t been finding it in Proving Grounds. These games are proof that Proving Grounds is going to be a chaotic mess of upsets and surprises. 100 Thieves Academy is the 3rd seed, while Evil Geniuses Academy is the 11th seed -- they’ve flipped these seeds on their heads, and we expect many more upsets like this before the season is over.

The most notable moment in these two games was the very end of game two. Evil Geniuses Academy spent much of the game rolling through 100 Thieves Academy before mercifully ending the game by rushing the 100T Nexus in the most comical way possible: with three surviving members of 100T unable to burn EGA down before they took the Nexus. 100 Thieves Academy will be in the esteemed company of teams like Golden Guardians, TSM, CLG, and FlyQuest in the lower bracket, which is going to make these lower bracket games an absolute blast to watch.

Dignitas Academy started off impressively in game one by demonstrating a near perfect execution of their composition’s win conditions. We’ve seen the threat that Viktor poses to team fight success, so locking Viktor out of his burst viability early game is essential. This is exactly what DIG Yusui did on Lucian to EGP Aspect on Viktor with the help of DIG Akaadian on Lillia. Speaking of DIG Akaadian -- his decision to invest in his mid lane early turned out to be essential for the success of the game. Allowing DIG Spawn to quietly scale in bottom lane helped push Dignitas Academy over the edge and confidently seal the game one victory.

Game two was a rough draft for Dignitas Academy. Perhaps the first win had them feeling confident and leaning in to comfort/pocket picks, but we’ll never fully know. Evil Geniuses Prodigies really showed off their communication skills here with some critical teleports coming in from EGP Srtty on Camille, helping push their bot lane ahead. EGP Shiro on Kallista had to snowball for EGP to effectively win with their composition -- slowly but surely he transformed into a punishing killing machine to seal the W for Evil Geniuses Prodigies

The third game was virtually the opposite of the first, with things playing out favorably for Evil Geniuses Prodigies thanks to EGP Tomio on Lillia being able to lovingly feed his mid laner EGP Aspect on Azir. We love to see teams playing around mid in interesting, aggressive ways. Dignitas Academy will have to duke it out in the incredibly competitive lower bracket with their fellow Academy teams.

No Org vs Barrage

Team fight tactics were the name of the game here. Game one was largely in Barrage’s favor for the majority of the game and things looked bright for our Burger Boys in Blue. Win early, win game, right? No Org patiently held on but was hemorrhaging objectives and resources to Barrage. However, a few critical engagements went horrifically wrong for Barrage during the late game and found No Org in a speedrun Baron/Dragon Soul, sealing a mind-blowing upset that none of us saw coming.

No Org triumphantly pulled a dominant second game win, affirming that they have that immaculate blue side boogie. Trade after trade skewed in their favor -- in early game, it was roaming picks and turret dives, and late game it was explosive team fights expertly tied off with a bow. This second game made for a clean 2-0 from No Org and the biggest Amateur upset so far. Barrage has revived themselves time and time again, and we expect to see them fight like hell in the lower bracket. Even though we feel that ALL of these qualifying teams have proved Amateur’s potential at this point, there’s the opportunity to exceed expectations and win the hearts of fans and viewers, and more importantly, a Proving Grounds top 3 placement.

The lower bracket was a mixture of expected outcomes and unlikely upsets. FlyQuest Academy (6th seed) vs CLG Academy (14th seed) turned out as expected -- FlyQuest swept 2-0 and knocked CLG Academy out of the running for Proving Grounds. CLG Academy’s issues stem from a revolving door of impressive veterans like Pobelter and WildTurtle coupled with a mixture of diverse, developing talent. Veterans played a number of games that less experienced players would benefit from -- and the team composition was never consistent enough to create consistent team chemistry. CLG Academy has a deep well of dense talent, and we’re looking forward to tracking the growth of their players.

Dignitas Mirage vs TSM also had an expected outcome -- TSM is the 9th seed to Dignitas Mirage’s 16th. Diginitas Mirage's growth under their partnership with Dignitas has been so exciting, and we know they're destined for great things if they keep this rate of growth.

An unfortunate emergency interrupted an exciting series between Wildcard Gaming vs Immortals Academy, postponing the third and final match for two days. The first game was a felt secured by Wildcard Gaming thanks to a hard-earned lead from tireless, effective rotations and great team communication. But it wasn’t meant to be -- two simultaneous team fights in the last six minutes of the game sealed Wildcard’s fate, netting Immortals Academy a Baron buff and a Nexus. This is the game to watch if you have limited time: it’s one of the craziest games of the entire series so far.

Two days later, the WC v IMT third match day arrived. We were unable to stream from the Academy account, so caster Cubby took it upon himself to stream the game from his channel. Wildcard Gaming swapped their support Daption out with impressive substitute Yasin.

One of my favorite aspects of Immortals Academy is how they fly by the very seats of their pants. The level of reckless aggression is tempered (just barely) by a level of controlled aggression. This really serves Immortals Academy in team fight mechanics, because they’re constantly engaging first and picking fights. Game three came down to team fights once again, with Immortals Academy’s superior engage serving Wildcard Gaming punishing defeats too many times to recover from, eliminating them from Proving Grounds.

Wildcard is one of the most endearing teams in Amateur, with the majority of the staff and players actively participating in and supporting the Amateur community. Wildcard Gaming is more than just a team for the Amateur community -- they're indisputably the wholesome heart of NA Amateur League of Legends. Any professional organization would be lucky to have any one of these incredibly talented, driven, community-building players and staff. The benefits of Wildcard Gaming’s existence in the Amateur community extends much further than exciting gameplay, and we’re very sad to see them depart Proving Grounds.