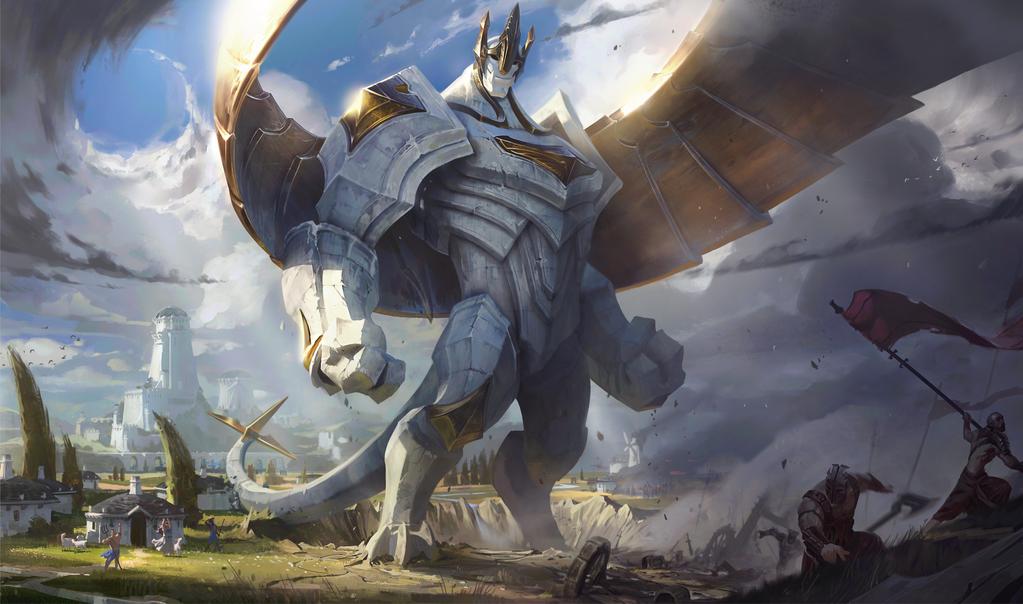 The time is finally upon us! Riot Games announced the new structure for the path to Proving Grounds in November and we’ve seen it implemented in several independent amateur tournaments over the last two weeks. The official start for LCS Academy’s season and the Proving Grounds qualifier Spring Split was Wednesday, January 20th -- and boy, did things kick off quickly.

Despite a rough start to the tournament, the Golden Guardians Academy roster has a lot of potential: especially in their OCE transplant and top laner Tally. In the first game vs Immortals, GGS struggled to keep up their economy in an impactful way, leading them into an unfavorable team fight at 13 minutes that secured the loss for GGS. If Golden Guardians taught us anything last season, it’s that their goal is modest and achievable: growth before wins.

Golden Guardians experienced a tough stomp for their second game, one that felt a little like staring straight into the sun. With a 17k gold lead favoring Team Liquid, the game breezed by for Golden Guardians at 25 minutes, one of the shortest games so far. A tough loss for GGS but one that they have a lot to learn and grow from.

The first game for Immortals was an impressive feat not only because it was their first game as the full, intended roster, but because they won by a significant margin. Immortals didn’t get the chance to scrim with their support Joey before their first OR second Lock In game. This bodes well for IMT’s chemistry, which was demonstrated by capitalizing on a strong lead in resources to bully objectives and maintain a steady tempo. At 13 minutes, a Curtain Call from a heavily geared IMT Keith on Jhin further emphasized the resource gap and sealed the win.

Their second game vs 100 Thieves proved to be much more challenging with less than a 2k gold lead, ending at almost exactly 40 minutes. IMT’s support Joey set them up for success with numerous Leona plays that kept them competitive in an already narrow game. The final mid fight initiated by 100 Thieves came down to raw technical skill and Immortals came out on top. Despite being counter-picked, IMT’s jungle Potlock also came through victorious. Potluck's team supported him with a lot of patienceand control early game, which allowed him to scale and dominate on Graves late game. Potluck also displayed a remarkable amount of humility in a post-game interview indicating that he believes he has what it takes for LCS, but he’s very happy with what he’s learning within Academy.

With an explosive first game, Team Liquid proved that their Academy roster is here to win. While Dignitas maintained a strong lead early and mid game, TL demonstrated that late game punishment can cost a seemingly winning team everything, no matter how consistent their early and mid game is. At Ocean Drake 30 minutes in, Dignitas scored an ace against TL, painting a bleak picture for TL. In an unexpected twist, TL managed to capitalize on late-game death time by catching DIG Spawn on Samira and DIG JayJ on Rell under TL’s mid turret. One final rush immediately following those deaths proved to be too much for Dignitas to fend off, nabbing TL the nexus.

Their second game qualified as the shortest game of the tournament so far at 24 minutes. Team Liquid took a monstrous 17k gold lead to the bank against Golden Guardians, awarding TL their second win of the Lock In.

Perhaps the most unexpected upset of the tournament so far, Dignitas had a well-controlled and consistent lead over TL for nearly the entire game, even achieving an ace at 29 minutes. Whatever feelings of elation may have come from acing TL were immediately erased when two members of DIG -- Spawn on Samira and JayJ on Rell -- were caught under TL’s turret. Less than 3 minutes after acing TL, Dignitas had lost both Nexus turrets and the game.

Dignitas played heavily to their composition’s aggressive strengths for the second game. Their draft clearly illustrated that in order to win, the game would have to end quickly. Passive initial gameplay from Dignitas resulted in too many punishable bold plays from FlyQuest. Dignitas’ aggressive retaliation was rewarded and they earned their first win of the tournament.

The first game was an impressive one for C9, kicking off a meek start that snowballed into a monster lead. Their consistently aggressive plays had them baiting TSM into a final, devastating Baron at 30 minutes that paved the way for a strong win. In his post-game interview, FlyQuest’s bot player Tomo stated that his only threat in Academy was C9’s bot lane, K1ng. This game demonstrated K1ng’s ability to adapt and weaponize this new Moonstone meta on Seraphine for devastating impact.

A strong draft and a peaceful start made it difficult to predict the outcome of C9’s second game. Their opponent, CLG, had drafted a mobile but seemingly vulnerable set of champions (Camille, Taliyah, Syndra, Xayah, and Galio) for effective rotations, which didn’t seem particularly concerning for C9’s strong counter-picks (Jax, Graves, Twisted Fate, Kai’sa, and Leona). Unfortunately, C9’s top lane Darshan could not turn his pick of Jax into the win condition and hyper carry that C9 needed to secure a second win.

TSM’s roster looks incredibly impressive based on their past individual performance. Like its LCS parent, while a bit slow to spin up initially, they showcased a lot of potential in the last two days. In their first game vs Cloud9, they maintained a dominant lead early game but slowly began to lose their focus as the bot lane matchup crumbled -- TSM’s Cody Sun drafting Kai’sa and support player Fizzi drafting Alistar, while C9 had K1ng and Isles on Seraphine and Janna, showcasing the exciting, emerging Moonstone meta. The trappings of an amazing Academy team exist within TSM, and given their performance in the second game, it seems we can expect positive growth from this roster.

TSM’s Hauntzer came through on an extremely strong Renektop pick for the second game, showing that TSM’s teamwork initiatives are paying off and allowing individual players to shine within a more effective unit. Hauntzer’s multiple 1 v 1 performances highlighted some incredible mechanical skill and carry potential, securing their first win. In a post-game interview, TSM’s mid laner Swordd (who drafted Orianna for this game) attributed their success to the three veterans, Hauntzer (top), Babip (jng), and Cody Sun (bot), taking charge and calling shots.

Despite keeping a firm grip on map control for the early game, CLG’s heavy focus on some unproductive ganks and inefficient objectives allowed 100 Thieves to walk away with a farm gap. There was a critical moment in the game where 100 Thieves stole a second Cloud Drake from CLG which ushered in a growing divide that CLG would not recover from. They may have lost this one, but they should be proud of their consistent gameplay.

In their second game of the tournament, CLG brought the same impressive teamwork that we had already seen, but amplified. The glue holding this well-oiled CLG machine together was their mid-laner-turned-top-laner-turned-mid-again, rjs on niche-pick Syndra. Responding to roaming threat C9 Copy on an intimidating Twisted Fate, rjs negated Copy’s presence on the map entirely. CLG’s support Hooks on Galio was also an immense presence during every critical fight and the combined performance of these two players ensured a very strong first win against C9.

We knew 100 Thieves wasn’t messing around when they kicked off a strong draft with notable, highly mobile picks like Camille, Galio, and Nidalee. Their early game was expertly carried with a farm gap despite a number of misplays that eventually cost them two drakes and a handful of kills. The moment the lane phase ended, 100 Thieves’ superior macro play and equal economy became painfully apparent. CLG had a tough time in every subsequent team fight, slowly losing control of their tempo and the map. It wasn’t a stomp by any means -- both teams went blow-for-blow late game. 100 Thieves came out on top after a teamfight topside dominated CLG, consequently giving 100 Thieves a free Baron. Keep an eye on OCE transplant and 100T mid lane Ryoma, whose performance in this game on Galio was essential to their success.

As for 100 Thieves in their second game, well -- live and learn. A poorly planned level 1 invade may have been a harbinger for how this game would end. Despite a strong performance following a rough start, what ensued was an extremely close late game up until the very end. 100 Thieves opted into a mid fight that saw them wiped from the map in a late game upset, giving Immortals their second win.

FlyQuest began their first game vs Evil Geniuses with a weak draft. Losing the draft meant that FlyQuest had to display some serious judgment and patience when choosing engagements. Although potentially hemorrhaging objectives at certain times, they were also waiting for openings to optimally punish EG. This strategy paid off after more than 30 minutes of patience, rewarding FlyQuest a devastating Baron clear and earning them their first win of the tournament.

Despite having a better scaling, safer draft, FlyQuest took too much bait laid by Immortals seemingly passive gameplay. For every failed play, Immortals heaped on double punishment and granted FlyQuest swiftly compounding losses. This game ended at a blazing fast 26 minutes, leaving a dizzy FlyQuest to analyze how they lost with such a strong draft.

Winning the draft with a bevy of strong picks in Renekton, Nidalee, Sett, Miss Fortune, and Leona, Evil Geniuses maintained a strong map presence and objective control until late game. Their hard work culminated in a tough Baron, following several losing team fights. Losing Baron to FlyQuest led EG to defeat despite a very strong showing that this team should be proud of.

Evil Geniuses began their second game with an unexpected scuttle battle, ending only when TSM’s top Hauntzer on Renekton had secured a kill, red buff, blue buff, and a dizzying lead over EG’s jungler Contractz on Graves. This struggle set the tone for the rest of the match -- small skirmishes here and there snowballed out of control in TSM’s favor. Shortly after the early scuttle fight, TSM caught two kills in the jungle, followed by two more botside, all before 10 minutes. Evil Geniuses recovered lost ground by capitalizing on TSM’s greed in lengthy team fights, but these efforts were not enough to recover the ground that was lost in the first 10 minutes.