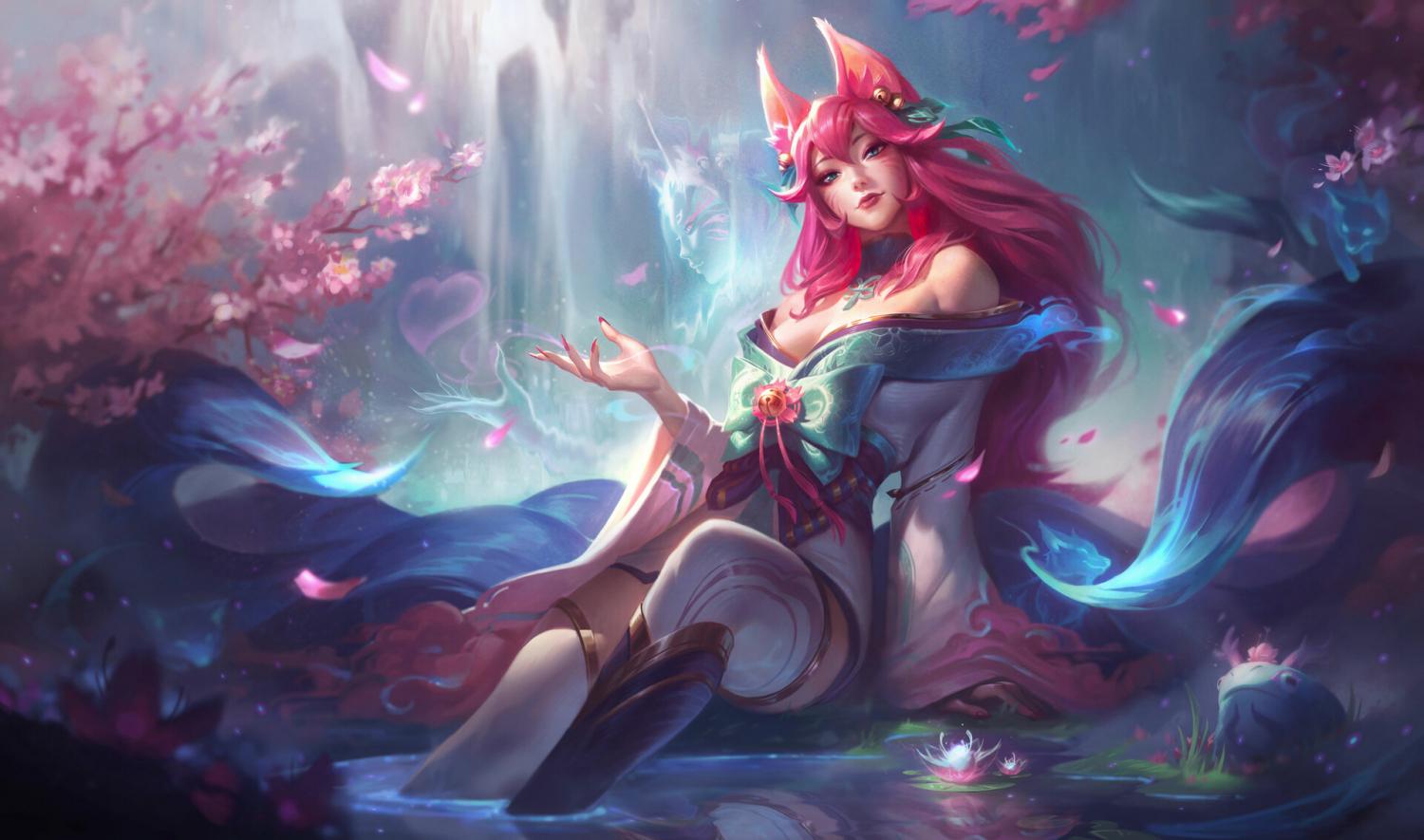 Hi, I'm Guubums. I'm currently rank 12 (1500LP) and am consistently top 10 NA. Some might recognize me for previous guides, most notably, introducing adept Ashe the patch before it became the best comp in the game.

I spammed Ahri last patch when it was considered a C tier comp by most top players and climbed roughly 3-400 LP with 30/30 Ahri and a 2.8 average up to 1600. It's more difficult to force the comp in the current patch, but the comp is now buffed and considered an S tier comp. The vast majority of players are playing it extremely incorrectly. I've taught many mid-high challengers (DQA TFT, TTV inikoiniko, setsuko, bertasaurus, chessmage, pickleonion, robinsongz to name a few) how to play the comp to great success and now I'm releasing the guide.

This is the barebones comp at level 8 without any 5cost units, but looking at this will give you no indication of how to actually play the comp. Most players would look at this and attempt to copy the comp in their own games. For your own improvement as well as actually finding success with the comp, I recommend that you read the whole guide.

First and foremost, this comp is extremely expensive. The core units in order of importance (Aatrox, Sej, yuumi, and Ahri) cost a total of 45 gold to upgrade to 2*. This comp does not function extremely well without the upgraded units past stage 5 and getting there is not easy. The least important (by far!) of the 4 units to be upgraded is Ahri, if you have the other components in place, it is not difficult to reach stage 6 with an Ahri1. To be able to consistently hit these units on stage 5, you need to play the comp from a position where you have the econ to hit and the HP to lose in the cases where you do not. If you play extremely greedily and play for Best in Slot (BiS) everywhere, it is difficult to preserve the HP and econ required to play the comp.

That being said, the beauty of the comp is the lack of reliance on items. **THERE IS NOT A SINGLE COMPULSORY ITEM IN THE COMP.** Yes, that means Chalice of Power (snow cone), Jeweled Gauntlet (JG), and especially Guardian Angel (GA) are extremely extremely unnecessary. You can play the comp with items that you've slammed from the early game so long as by stage 5 you can find some mediocre items for your Ahri and utility items for your frontline. If you notice from my history, I've top 4'd many games with a locket Ahri and in over half my games I don't have a single chalice.

The general game plan is to reach 5-1 with at least 45HP and 50-70gold to roll for the final comp. In the current meta, this is not possible if the only items you're looking to slam are chalice and JG. You need to play strongest board at all points in the game and preserve HP. In many cases, this involves rolling 4-10 gold at 3-2, 3-5, and 4-1 to hit pairs, find new chosens, and improve your board with upgrades.

4vanguards, 4mystic, 3mage; when do I play what?

As a default, 4 vanguards is extremely potent in the current meta. Comps without last whisper on a stacked AD carry struggle with getting through 4 vanguards, even with yone. Hecarim is considered a "bad unit," but with positioning and some luck, his survivability is unrivaled due to his built in sustain (this can be checked the 2nd tab in the damage recap!)

But Guubums, Yone counters vanguards, are you stupid?

This statement is not entirely untrue but it doesn't tell the full story. Yone cuts 60% of armor and a 4vanguard Sej and Aatrox have 360 and 370 armor, respectively. A yone cuts this down to 144Armor. This is essentially a 78% physical damage reduction cut to 58%. Although this is a massive cut (1.9x increase in damage taken), they're still more or less unkillable by pure physical damage when you factor in utiltiy items, CC, and Yuumi healing.

4 Mystic is a tech synergy that should be played if the lobby calls for it. The beauty of 4 mystic is that the mystic units in the set are extremely powerful standalone units. I will mention though, that Shen is terrible in this comp and is almost always a waste of gold. Shen, while very powerful in other comps for his frontline, is bad because he does not benefit from the vanguard trait and his ability is self shielding, whereas Janna, for example, will shield the vanguards. The absolute value of the shield is roughly equal (at about 1000), but when factoring in the resistances of the vanguards, the effective shielding of Janna is drastically higher.

As a tip, if opposing Ahri players have JGs, never think "I don't need 2 mystic because I'm getting 1 shot anyway," because 2 mystic hedges against the Ahri missing. Ahri has unreliable targeting so she can whiff. Without 2 mystic (in any comp), the remaining units can easily beat you or at least CC you while killing the lower HP units until Ahri casts again.

Additionally, 4 mystic is very easy to fit in the comp with the correct chosen, vanguard spat, or FoN.

By far and away the biggest mistake 95% of players make when playing this comp is items. I can't stress enough but GA is legitimately a waste of 2 components as well as an item slot when built on Ahri, please do not build this item on Ahri. If built in the early game or found on late game carousels, it is better on other units such as Aatrox, Zilean, or Lilia in most cases (if there is a heavy assassin presence, you can GA Ahri).

BiS Ahri is *probably* JG IE Shojin, but the term "BiS" is the biggest bait in all of TFT. In the vast majority of cases, even outside of this comp specifically, greeding BiS is a very suboptimal play. You need 1-2 solid items on your carry most of the time and if you're fortunate enough to hit BiS, it should be considered a high roll, not the goal.

Building Ahri optimally should generally just be supporting her with aura items such as chalice, zeke's and locket, while filling her up with leftover items. Generally, you need to think of the 3 Ahri items as Damage, Damage, reliability. Where damage can be items such as JG and DeathCap in the ideal cases, but also Ludens and morellos in others.

Reliability can be considered as any tear item (especially after the buff, 1 tear on Ahri is *extremely* valuable), or attack speed items such as guinsoos, Giant slayer, or RFC is worst case. Otherwise, you can think of reliability as defensive items with Trap claw > Quick Silver Sash > Guardian Angel.

Another huge mistake people are making is not valuing the 1 tear on Ahri. It is better to place to chalice on Ahri than on yuumi for the 15 mana since it reduces the number of autos it requires for Ahri to cast by 2, and there are only 2 units in the comp the benefit heavily from AP anyway (Ahri and Yuumi), so you can corner Ahri with a chalice while still receiving the benefit from the aura.

Otherwise, frontline items are very powerful in this comp. Stacking Aatrox over Sejuani is generally preferred. However, with the Aatrox buffs pushing him over the GS threshold with only 1 belt at 2*, be careful with placing belt items on Aatrox. Other utility items such as ionic, dragons claw, thief's gloves, are very valuable in Aatrox.

Bramble specifically should be placed on Cassiopeia because the 50 armor is more valuable on her than on the vanguards.

The one disclaimer I will make for the carousel priority is that there is a good chance tear is now better than belt after the ahri buff, but it's still close.

Rod and belt are the best because it is very difficult to find yourself in a position where no items are slammable when you start these components. For example, belt is considered a bad start for most other comps because GS is so prevalent, but since Sejuani2 is naturally over the GS threshold of 1750 hp as well as having insane stats from vanguard, mystics, and yuumi healing, Warmogs is actually a very enticing slam in this comp.

The only non-slammable rod items are morello and gunblade in most scnearios. Everything else is quite viable depending on your early game composition.

Mage is by far the best. The best user of it in order goes Zilean > Aatrox > Cassiopeia > Yuumi. Always try to fit Lilia when running 3 mage because it's fairly easy to and she's extremely broken.

Vanguard Spat is valuable to cut hecarim for either 3 mage or 4mystic flex. It's best used on cassiopeia.

This is my default positioning and I'll explain why for each unit.

Why are we positioning our frontline on one side, then our backline on the other?

1. Yuumi's ability gives healing and attack speed. She ults the lowest HP unit (flat, not percentage) then ults to the unit furthest from her location. It is invaluable to get the 2nd part of her ult onto Ahri for the attack speed. The positioning increases the odds that yuumi ults to a frontline unit then back to Ahri.

2. By offsetting the frontline from the backline, you drag AOE abilities such as yone, cassio, sett, etc., away from your backline and towards your frontline. Stray sharpshooter or Hunter procs hits coupled with some of these AOE abilities can kill Ahri before she casts.

3. Thresh in the top corner. The corner unit is always attacked by the the enemy corner carry. Against most comps, this unit can be targeted by a maximum of 3 units, 2 of which generally wont do much damage. Even a full stacked AD carry cornered unit will not kill thresh before he ults and his ult will provide a shield to himself as well all adjacent units (generally the Aatrox and the yuumi the often jumps to the thresh).

4. Aatrox 1 offset from thresh. Similar to the corner unit, this unit will always be targeted by the unit 1 right offset from the corner as well as some auxiliary units. This is the best spot to get a reliable cast from Aatrox as well as pulling units away from your Ahri in many cases.

5. The hecarim is placed where it is because it gives it the highest chance to be surrounded, getting infinite value out of his ult. A really cool trick to maximize this is place a ZZrot on Sej because it causes enemy frontline units to walk around your frontline wall to hit the Sej; thus, surrounding the hecarim.

7. Try not to put units on both sides of the backline corner because the likelihood that yuumi ults the non ahri corner increases significantly.

I also do paid coaching. I've worked as a tutor both professionally and privately for 6 years. I've coached several players to challenger and many players to masters, including a handful as recently as set 4. I also actively coach friends other prominent members of the NA challenger community on other people's stream.

If you're interested, please find me on stream, send me a DM, or find me on discord at guubums#1874.

And I'll be coaching/backseating/talking with cottontail over at his stream later (https://www.twitch.tv/cottontailtft) today if you guys have some questions. As always, feel free to post feedback on questions in the comments. :)