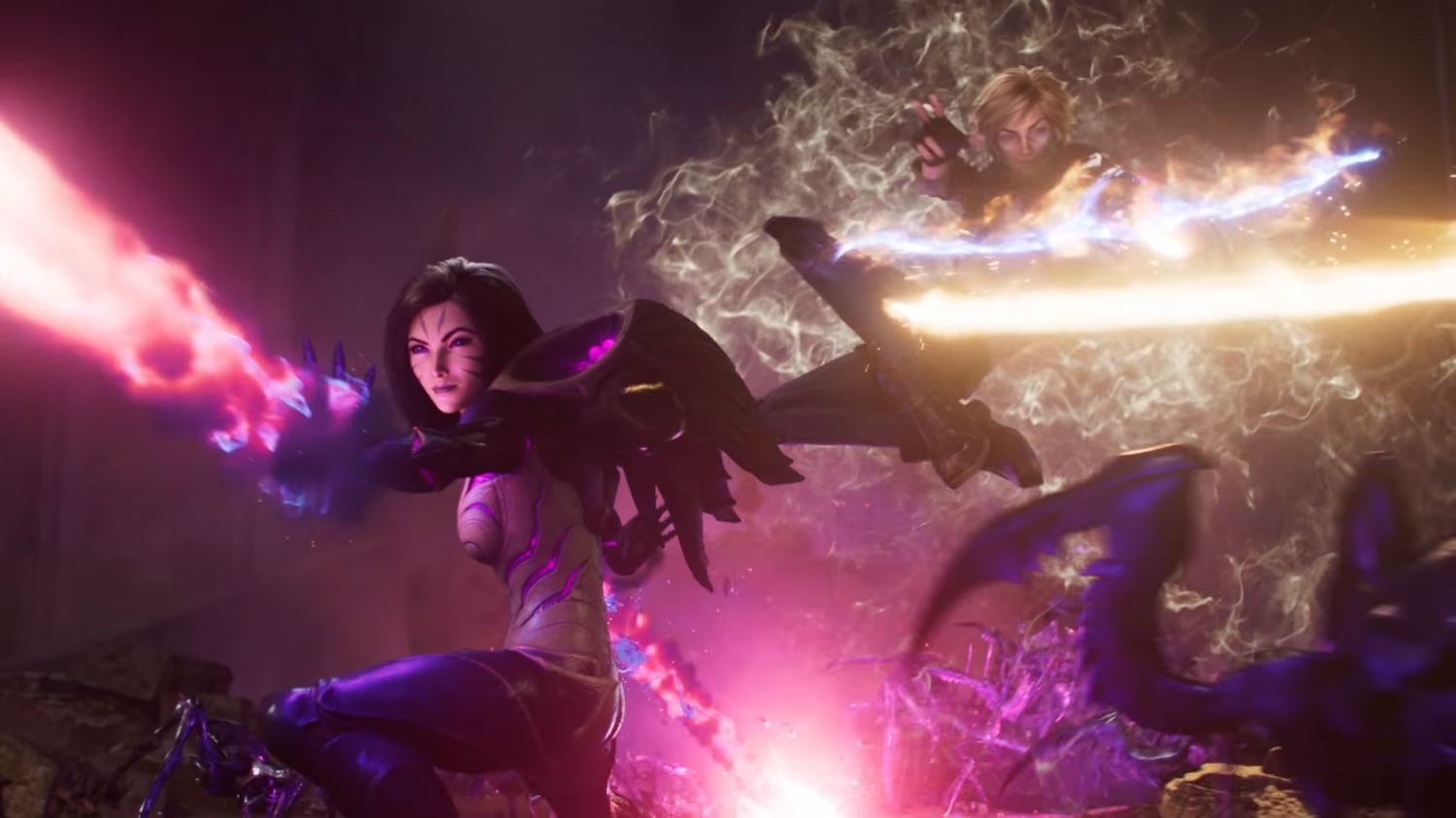 Day 1 of the Battle for the Rift was wild! We had some one-side matches and saw teams of more equal footing clash; either way, they were all exciting to watch! Remember, these are some of the best teams, and players, in Europe. The talent shown was impeccable, but only half of the teams could advance from these Best of 3's.

In what would be one of the most one-sided matchups of the day, we had Natus Vincere show why they're one of the tournament favorites as they dominated VAMPIR3.

The game started with the Junglers rotating to meet around an early Scuttle on the bottom side of the map, with QiMiao changing his pathing in the hope to get it. But NAVI were ready and willing to fight, especially with SkyFL’s Aurelion Sol able to fly down to join the skirmish.

By 3 minutes, NAVI found themselves with a 1k Gold lead just purely from farm. This lead to a Dragon fight that easily went in NAVI’s favor, a 5-1 trade, but due to Wild Rift’s quick respawns VAMPIR3 were able to get back onto the map and snatch the objective away.

From there, it was Natus Vincere dominating fights while VAMPIR3 could clean and find skirmishes. While V3 definitely put up a fight, NAVI unquestionably found their advantages and soon took over the game.

In what felt like a repeat of Game 1, we saw action on the bottom side of the map once more. This time, VAMPIR3 held firm and it felt like they had warmed up; helped with their early dominant picks of Xin and Braum, both teams limped away from the first skirmish but a huge bubble from Nami just lined VAMPIR3 up for an easy mop up by NAVI.

But V3 were able to stand firm and hit back, finding picks and it felt like the game was tilting in their favor, but in true NAVI fashion, they found the leads they needed and closed the game.

Give them an inch, they’ll take a mile.

QLASH took a very pick orientated composition to start off the series, with Rengar and Lux looking to single out targets. It started well, with Rengar able to quickly clear the jungle and meet Andreszed to pick up First Blood, basically a 1v1 but the Corki got the last hit for the kill 'secure'.

When it came to Dragon, there was a cross map trade as Team Queso opted to take a dive in the Baron lane while QLASH took the objective on the other side of the map.

Queso continued their focus on the top side of the map, taking the Rift Herald and looked to translate it to the bottom side for the next Dragon. Dropping the Herald in the Mid lane in the hope of gaining priority, Queso weren’t expecting QLASH to slay the Herald just as she was about to bonk the Tower.  Even with the priority, they Queso couldn’t commit to the Dragon just yet.

With both teams skirmishing around Dragon, it wasn’t long until QLASH grouped up and allowed for a perfect Cyclone from Andreszed’s Wukong. With the large engage, Ibu’s Kai’Sa could fly into the backline to deal the damage and Queso dominated the trade.

With that, it felt like the deal was sealed. Rengar was shut down, and Acolyte’s Camille was doing work in isolating and locking picks with her Hextech Ultimatum. Finishing the game 14--2 on Kills and nearly 17k Gold ahead, Queso proved why they were a favorite for the tournament.

Game 2 saw the Fiora slip through bans, the split pushing menace helped hold QLASH in the game even when it felt like all hope was lost.

QLASH did get First Blood in the Baron lane, with a nice gank from Foulen’s Lee Sin, but Queso just looked to Dragon before finding two quick kills around the Mid lane; although QLASH’s Sayvek did take the 1v1 in the Dragon lane on Kai’Sa, helping to keep the scoreline even.

QLASH simply made some mistakes, letting pathing get the best of them and forcing them into bad positions. Regardless, Ruiz’s Yasuo was slowly taking over the game, and Queso had the tools to create engages and, therefore, success.

The Fiora continued to be a thorn in Queso’s side, and QLASH tried to find avenues back into the game with picks around the map, but Queso were able to stack up the objectives and grow their lead; eventually finishing with little less than a 18k Gold lead.

With the first half of the matches being more one-sided, or so the casters predicted, the second half felt a little closer and the matches got ever more exciting.

The Fastpay Wildcats could be argued to be the weakest team in the tournament, but they were against a roster that were yet to play under the Game- Lord banner. While on paper, Game-Lord could be deemed a clear favorite, it seemed like they had to prove that they could work as a team first; and prove it they did, coming out of this series securing their place on the tournament favorites list.

Random showed why he has been deemed one of the best players in EU, taking the Akali so he could put on a performance. We also saw the draft adapt in interesting ways, such as a Jhin being taken into the Mid lane against Gandalf’s Galio, where YeQiu’s physical damage could negate a lot of Galio’s power.

Early trades showed how hungry for blood the Game-Lords were, and a Tower Dive landed them First Blood in the first two minutes of the game.

The game simply snowballed into Game-Lord completely outmatching their opponents in lane, this win felt more like a player diff than a team diff; especially when Random was getting 1v2 outplays.

Nevertheless, the Wildcats searched for a way back into the game, attempting fights that were in their favor, but Game-Lord were simply too far ahead, and were able to close out Game 1.

Game 2 felt a little closer, especially with Wildcats banning away Akali and Diana after the previous slaughter.

In what felt like a mirrored repeat from the previous game, First Blood went the way of Game-Lord at just 2:30 into the game after sending three men to the top side of the map. However, this time Wildcats could fight back, with Seraphine and Janna able to find picks as well as be there for disengages.

This felt like more of a game, it wasn’t as one-sided and Wildcats had some agency in the game, but what they lacked instead was confidence. Quite simply, they let Game-Lord get away with murder. Wildcats simply lacked the confidence to contest a Baron, leaving it for Game-Lord to essentially pick up for free.

Baron was slain as it spawned around the 10 minute mark, and within two minutes Game Lord had found a fight and looked to end the game; a 17k Gold lead with their 10-4 score line.

This series finally showed us Ziggs, the first time the little Yordle was let through bans. Being incredibly strong due to how Wild Rift’s towers are like paper to cut through, Ziggs’ Satchel Charge just makes them all the easier to destroy.

But, Rengar was the first pick for TrovaNova, which was definitely questionable as they gave the Ziggs power pick away for free.

TrovaNova led for the early game, Vejos’ Diana held up and even arguably won against Snitch’s Ziggs. With Friend’s Ezreal building Muramana first it halted the powerspike, dealing less damage than a Sheen would, but by the end of the game he had made a name for himself with the sniping from the Trueshot Barrage. First Blood came as the two teams danced around Rift Herald, an Ezreal Ultimate flying from the Dragon lane as a Ziggs Ultimate landed on Lulu; the combo wiping out her health.

With Rift Herald dropped, and a Ziggs to clear and execute towers, Tribe were able to push down the Mid lane in seconds, taking Tier 1 and Tier 2 before leaving the Herald to do damage to the Inhibitor Turret.

Even with what felt like such a large lead when it came to objectives, and Tribe being 3-0 up on Kills, they were less than 1k Gold ahead.

It was the Baron fight at 10 minutes where the game fell apart for TrovaNova however, as Tribe got an Ace; with a Triplekill going over to the Ezreal. One more fight around the Dragon went a similar way, and Tribe closed out Game 1 at 12:30.

TrovaNova learnt from their mistakes, and first picked Ziggs this time, but Tribe continued to get their power picks of Gragas and Ezreal, as well as Braum, before rounding it out with a Kha’Zix.

The game went in a similar way to the previous one, TrovaNova had the upper edge to begin with, and Ezreal was sniping left, right, and center. This time TrovaNova held onto the lead; causing this to be one of the most exciting games we saw all day.

After flexing the power of Ziggs in Game 1, Tribe were suddenly on the receiving end of the bombs. Mega Inferno Bomb was being tossed out and getting kills constantly, and by the end one Bouncing Bomb was halving the Ezreal.

By 10 minutes, we had a 6-5 scoreline in TrovaNova’s favor, who also had over 4.5k Gold more to their name, but Tribe were finding the objectives that could help them stay in the game.

The game came to its final run at 16 minutes, when TrovaNova found a huge fight; with the Ace they turned to Baron and started to push in to finish. The Ziggs could clear minions and destroy towers in an instant, and the push was looking very scary as we started to talk about Game 3.

But as Inhibitor Towers fell, Tribe found their comeback. In a 3v5 situation, they found the engage and tore their opponent’s apart; L3oN was quite simply smurfing on the Gragas. Even at a 10k Gold deficit, Tribe were able to get their fourth Dragon of the game, Elder Dragon, slaughtering TrovaNova as they walked into them one by one.

With the clear advantage, Tribe turned to Baron too to round out their objective domination, and with the buff being so powerful not even the super strong Ziggs could halt the push.

In a matter of minutes, Tribe went from hiding in their base to controlling the map, claiming the win at 21:53. Less than 2k Gold ahead, and 14-13 on Kills.

Remember, you can go back to watch the VoD, and this is one you should definitely be checking out. An incredible way to round out Day 1 of the Battle for the Rift.

With that, our Semifinalists are chosen. We’ll have the Baron Fight Finals rematch as Natus Vincere take on Team Queso, while Tribe Gaming and Game-Lord will be battling it out for the chance to go to the Finals.

Natus Vincere quite simply looked dominant, but how will they compare against a team of equal stature? Tribe Gaming looked shaky, but also proved they can come back despite the odds; can Game-Lord hold them down?

Kai'Sa had a 100% presence over the day, and was banned constantly by the end. Will this trend continue? Will Ziggs ever be allowed through again? Will teams finally give up on the Rengar, and does Diana deserve bans?

We'll find out how the teams adapt after the days matches, as we go into the Semifinals and later on the Finals!