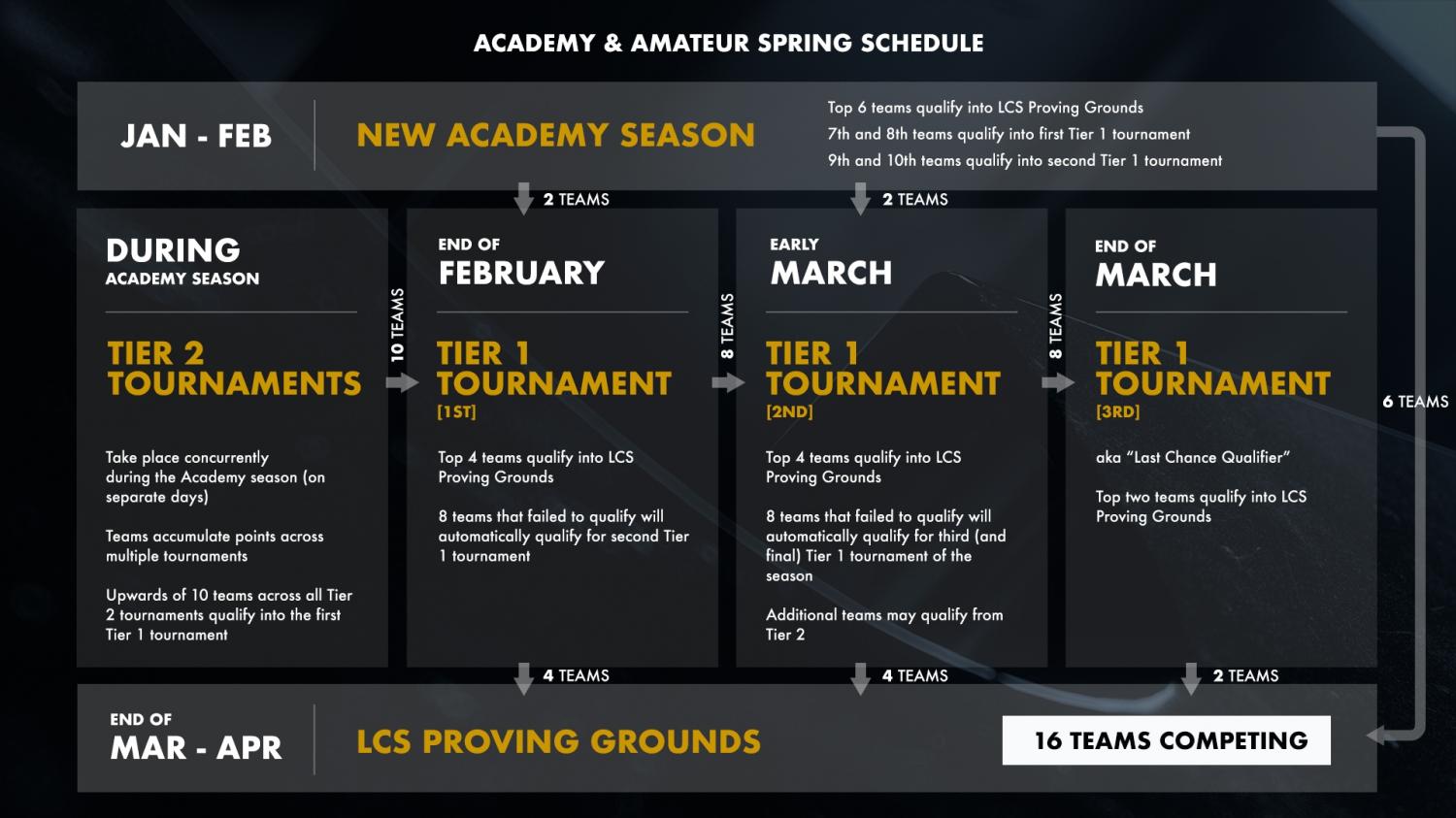 Beginners Guide to the Proving Grounds

The Academy and Amateur scene is well under way as they work towards the Proving Grounds, as Tier 2 Tournaments have already started. Riot released a statement and infographic which is arguably hard to digest and make sense of, so lets simplify it all!

Tier 2 Tournaments
For most teams the journey to Proving Grounds starts, and possibly ends, here. The Amateur Scene is full of tournaments and events, from XLNC Esports to Challengers Uprising. These are full of players that want a taste of competition. Some cater to any and all ELO’s, whilst some only focus on the top players.

These Amateur Tournaments had the opportunity to apply to Riot to be a Tier 2 Tournament Organizer, and work in partnership with Riot to put on what would be the starting block in the race to the Proving Grounds. After a thorough application, where Tournament Organizers had to explain not only their current metrics and analytics, but also their plans on what they can bring to each event and broadcast, a handful of them were chosen. Each event will have their own format and schedule, agreed with Riot; although none of them will be running on Academy days.

We know that a number of the teams took part in Challengers Uprising’s New Years Showdown, which was our first look at some of them, while Risen Esports’ Champions League is well under way as the first Tier 2 Tournament. BIG League has also just announced that they're joining the Tier 2's too, with applications just opened.

From these Tier 2 Tournaments, teams will gain points to move on to the Tier 1 Tournaments. For example, the winning team from Risen Esports’ Champions League will gain 100 points, whilst the team in last will only gain 10.

The Tier 2 Tournaments will be broadcasting their games, so it is well worth following them on Twitter to keep up with the latest news and where you can watch the games.

Tier 1 Tournaments
This is where it can start to get more complicated. The LCS Academy will be running concurrently with the Tier 2 Tournaments through January and February, following their usual Riot led schedule.
At the end of the season, the 7th and 8th placed teams will be be put into the the first of the Tier 1 Tournaments, whilst the 9th and 10th placed will be put into the second. The top six teams from the Academy season will go directly to the Proving Grounds.

The first two Tier 1 Tournaments will be made up of twelve teams, meaning that teams in Tier 2 will have a second chance to make it through to fill the last two spots of the second event.

Finally, it will all come down to one last chance at the end of March in the third of Tier 1 Tournaments. This will only feature eight teams, the top two of which will take the last spots in the Proving Ground.

Academy teams are also allowed to compete in the Tier 2 Tournaments although they can’t gain points from them, therefore not being able to qualify for Tier 1 Tournaments through them. There will also be a limit on how many Academy teams can be in each tournament too.

“A battle to be the best NA roster outside of the LCS.”

The format is currently unknown, but the Proving Grounds will be used to cap off the Academy season.

Who to watch
Although there are many teams, all of which deserve some of you attention, there are definitely some highlights to look out for.

The first of which should be ANEW Esports. This team has been in, and won, the Scouting Grounds Circuit multiple times, with the Midlaner 5Fire having won twice. His team-mates had left, some of which going on to Academy teams such as EG and C9, but now he finds himself surrounded by former LCS pros that we all know the names of. Viper, anDa, and Big joined the roster, alongside Value, with Zig and Stunt as Head Coach and Assistant Coach, respectively. This is a team that you should expect to do well, and not being an Academy team means they won’t be held back from making it into the Tier 1 Tournaments. They were sitting 2-0 at the top of the Risen Champions League at the time of writing, but then took their first loss over the weekend. Still a dominant team that should be expected to do well beside the hiccup.

100 Thieves Next is another team to watch. Coming into Risen, they were seen as a favorite to win it all. They haven't lived up to the hype, however, and the majority of other Academy teams aren’t doing too hot either. For saying they have the finances and behind-the-scenes staff behind them, they are being out-performed by Amateur teams that you’ve probably never heard of. At the same time it may be worth thinking about why some of the Academy teams aren’t dominating the scene as expected, it does show that the Amateur scene is flooded with talent; you should be paying attention to them all year round, not just for the Proving Grounds.

How will this affect Academy?
The Academy format has been changed to help support the Amateur scene that is running behind it. There will be ten games a week, for four weeks (five games in week five), which will allow teams to also participate in the Tier 2 Tournaments.
On top of this, there will be no Academy Playoffs or Finals, as the teams will qualify for Tier 1 or Proving Grounds depending on their performance over the season; basically rendering playoffs obsolete.

Make sure to use this as a chance to fully explore the Amateur scene, getting to know the teams, players, and casters!

Got any questions or things you'd like to know? Let us know in the comments and I'll do my best to investigate for future articles!