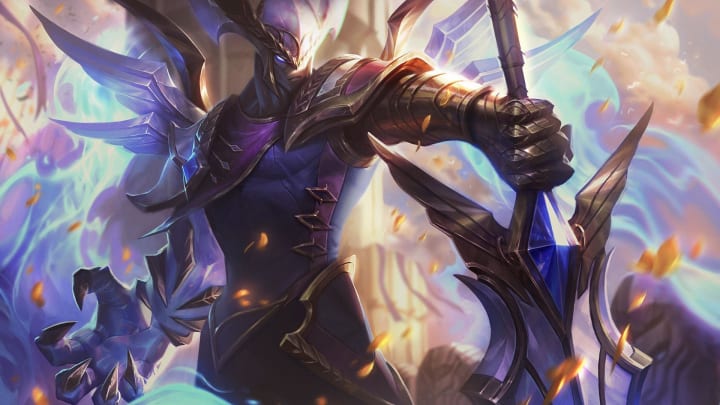 Risen Esports Champions League came to an end last night, with SolaFide taking the top spot after defeating Evil Geniuses Prodigies in the finals. This was the first of our Tier 2 Tournaments, giving us an initial look at the teams. There were 32 teams in this tournament and it would be impossible to go through them all, so let's look at the top six teams as these are clearly who you should be following over the course of the Proving Grounds Circuit.

This team was mentioned in my previous article, a strong team with a strong roster. They were unfortunately placed into a Quarterfinals game against their sister team, who knocked them out; meaning that they take the 5/6 place spot after being the fourth seed going into playoffs.

This is a historied team, running last year with the likes of MikeYeung. A quick glance at their past accomplishments has them coming first or second in all seven tournaments and playoffs they have taken part in since June; regularly beating 100 Thieves Next.

Whilst SolaFide also has some well known names on their roster, ANEW has some more history behind the organization and they are well worth a follow.

A new team on the block, with a mixture of new players and old, this is a fresh line up full of talent.
Their Top Laner, Concept of X, has been on no previous teams, joining Revival on their first League of Legends team when it was formed this month. Meanwhile the Jungler shows a different route into the Amateur scene, with Sybr having played for University of Western Ontario. The rest of the team has a little more experience under their belt, with Sudzzi, Scoooped and Plux all having spent time on Amateur teams over the past couple of years.

Revival is a group of talented solo queue players who have come together to form a team.  This team has a lot of talent, and good for scouting, but their lack of previous teamwork could be their downfall. However, after a decent result in Risen’s Champions League, it is likely that the players become a more cohesive unit and find more success going forwards. That or they get picked up by other teams.

Revival fell in the Quarterfinals to SolaFide, but a third seed spot at the end of the Champions League shows they have promise and we should be excited for their rematches in future tournaments.

A European organization, but jumping into the NA scene and showing great success. Barrage eventually fell after a grueling five game Semifinal against SolaFide.

Smax and Cubby sat down with Barrage’s Support, Winter, in their second episode of Proving Grounds Pod. During the episode, Winter explained how he helped to put together the roster, using his contacts and history to connect with Fanatiik and APA; Barrage’s Jungle and Mid.

If you’re after history and knowledge, then Winter is your guy. He is the only player to have participated in the first three NA Scouting Grounds, Winter has also been on Academy teams, on ANEW’s roster, and at the Tyler1 Championships.

Barrage is made up of parts, with two players coming from Supernova and two coming from the Academy scene. With a talented roster, and synergy already there in parts, this team should have success going forwards and it can only grow as the team gels together.

If you’re an EU fan, like me, or a fan of incredible memes and quality social media content, then Barrage Esports NA deserves your support over the next couple of months.

ANEW’s sister team, this is a newer and younger team but with no less history. Being made this year to take part in the tournaments, the roster doesn’t have more than a 3/4 place finish in the Challengers Uprising New Years Showdown and their run through Risen under their belts.

Individually, the roster has a lot of experience, especially in the Top Lane. Allorim has been playing on rosters since the start of 2015, joining teams such as Phoenix1 and Immortals, as well as Academy teams like Fox Academy and Optic Academy. Whilst he may have been the second option on some of the rosters, it means he’s played with the likes of Dardoch and Meteos, sOAZ and PowerOfEvil.

With such a young team, that was seemingly put together for this year, this is a lot of talent that needs recognizing. Placing well in their first Tier 2 Tournament means they could go far towards the Proving Grounds. If not, these players will likely be regular faces in the Amateur scene after proving themselves so well.

ANEW Blaze were knocked out of the Risen Esports Champions League in their Semifinals game against Evil Geniuses Prodigies, giving them another 3/4 place finish.

Evil Geniuses will be a name that you all know, the Prodigies are their second Amateur team behind Evil Geniuses Academy. The roster was picked up at the end of 2020, and before taking the first seed on the Risen Esports Champions League they took first place in the UPL 2020 Fall Playoffs. While some Amateur teams can be short lived and full of roster changes, having a team that has stuck together for a while and achieved high results should be an advantage to them; and scary for other teams. EGP has already found great success, so we can expect more from them throughout the Proving Grounds Circuit.

Evil Geniuses Prodigies’ success is proof that LCS organizations can invest in the Amateur scene successfully. Why are they so exciting? Because they have a well known organization backing them, but the players aren’t from the LCS/Academy scene. This roster has been plucked from the Amateur teams and given the support they need to succeed further.

SolaFide found itself in the spotlight in the Twittersphere recently, after their loss to Wildcard. Why was a SolaFide loss such a big deal? Because, as much as it is an amateur team, it is widely seen as having spent Academy-level money on its roster. With players that have mostly been on LCS teams, you would expect big things from this roster; Zeyzal, Apollo, Dhokla are standouts here.

Though SolaFide placed sixth in the Risen Esports Champion League, they moved forward to beat the third seed in the Quarterfinals; lining up a Semifinals spot against Barrage Esports NA who they beat after a grueling five games.

On top of their Risen performance, the same team won the Challengers Uprising New Years Showdown, just not under the SolaFide banner. Clearly a dominant team that is likely to be at the top of the standings over the course of the Proving Grounds Circuit, but will they be able to stand up against Academy teams?

This is a team to watch with a lot of experience behind them. If you’re new to the Amateur scene and looking for familiar faces, this is a team for you.

The BIG League starts tonight at 8pm EST (twitch.tv/BIGLeague_NA) with a different format to Risen Esports Champions League. This time we have 4 groups of 6 teams, meaning 24 teams overall compared to Risen’s 32.

Following from the BIG League Tournament, we have the Challengers Uprising event, which will be the last of the Spring Tier 2 Tournaments on February 8 - February 21.