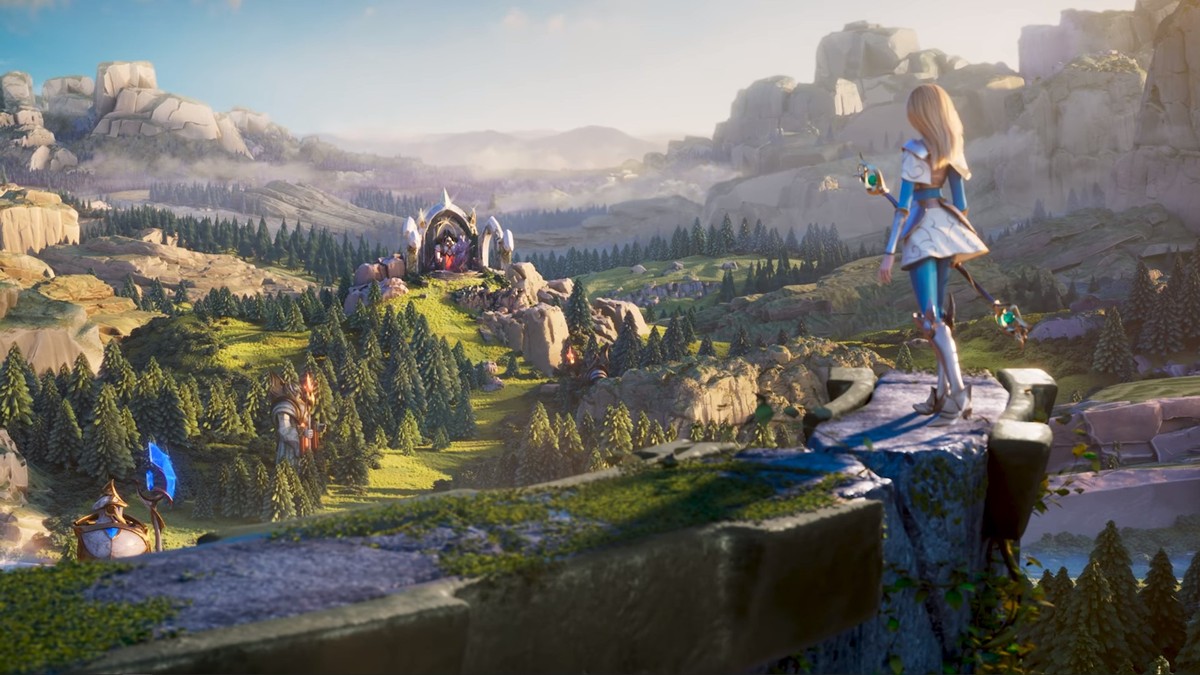 Prepare for the Battle for the Rift!

Giant Slayer's Battle for the Rift is just around the corner, 8 teams fighting for their portion of a $5,000 price pool! The teams have been randomly seeded and placed into the bracket, so lets dive into the competitors!

Natus Vincere is “born to win” in Latin, and win is what they are here to do. The team of five Chinese players, based in Europe, represent the Ukrainian organization. At the time of joining the roster in late March, all players and the coach were in the top 50 of the European Wild Rift Ranking.

The team won the Singularity Winter Cup 2021, and have had top three finishes in the six tournaments, half of those being second place.

Most recently, they have played against a variety of the attending teams, including Fastpay Wildcats, Team Queso, and QLASH Spain, at the TrovoNova Baron Fight last month. Natus Vincere had a clean Group Stage, 2-0ing everyone they met, but ultimately fell in the 5 game finals to Team Queso.

Ultimately, this is a team to watch. They’ve already proven themselves to best a few of the other teams at the event, now they just need to look for the crown.

VAMPIR3 ESPORTS come into this event after a second place finish in the Wild Rift Fest 2021. After a lossless event in the Mery Soldier Qualifier, they went on to have a decent showing. They were swiftly defeated in a 2-0 Finals, but only dropping two games in both the Qualifier and the Playoffs isn’t exactly something to be ashamed of.

Team Queso come from an already established organization who have found a place in the Mobile Esports scene. The coaching staff is made up of players who are ambassadors for the game, and create content for Wild Rift daily; so there is a dedicated and knowledgeable team behind the players.

“This roster is made up of some of the best players in the scene and their aim is to win every single competition in which Team Queso participates. We are talking about an exceptional roster in every way and we are sure their performance will be exceptional right from the start. It’s worth highlighting the return of three players, Ruiz, Ibu and Memorized, who return to the team after having been part of the Arena of Valor roster”

And what a roster this is. In the ten events they have taken part in since December, Team Queso have taken a podium finish in eight. That is seven first place finishes. Can they round it up to eight this weekend?

QLASH Spain come in with potentially a little less experience. While the team did take second place in the Queso Cup, and first place in QLASH’s First Spot event, the team stumbled in the Baron Fight where they finished sixth with a 2-5 record.

While it means they have claimed wins against Nova and Fastpay Wildcats, they will be looking for revenge against the likes of Team Queso and Natus Vincere; the former being their first test in this bracket.

Fastpay Wildcats have certainly struggled in the past against some of the other teams attending, in the Baron Fight they only picked up one win and that was against a team who aren’t in this event; they were able to take a game off of both QLASH and Queso in their series losses.

But, the team still shows plenty of success. They’ve taken part in numerous Wild Series events, which have turned into monthly events, and have come first in the latest one. Previously coming first in the Qualifiers of the two beforehand. Steadily gaining respectable finishes shows the consistency of this roster, now is their chance to claim glory.

Game-Lord are a consistent name, but sometimes struggle in events. In the EU Rift Showdown, they went 2-6 and placed seventh out of eight. In the RiftZone tournament, they claimed some early wins before being knocked out in Quarterfinals; claiming a fifth place finish.

This is another event where they can aim for gold. Can they prove the skeptics wrong and come out on top against some of the higher teams? They start their run against the Wildcats, so this should be a close series which they could come out on top of.

However, they’re bringing a new roster to this event and this is a good one. This roster is now made up of previous members of Team Singularity, who found a lot of success in the past.

Since these players entered the scene with Singularity in March, they played in seven events. They placed first in four of them, this includes beating out nearly every single team we'll see this weekend. Most importantly, in the EU Rift Showdown, they took the top spot over the majority of the teams which are taking part in the Battle of the Rift. This includes the Team Queso, Tribe Gaming, Natus Vincere, TrovaNova and Wildcats rosters. While the Group Stage was a little shaky for them, they went on to dominate the Playoffs and take first place; proof that they can defeat the opponents they'll face.

Do not make the same mistake as me and ignore the history of the players beyond this org. This roster can bring success, and this team could easily be in the competition for the top spot.

In a similar way to Game-Lord, Tribe Gaming may fly a little under the radar. However, they have found more success and could easily look to play spoiler this weekend.

In the EU Rift Showdown, they went for quite a dominant run, ending the Group Stage in first, 7-1. They did, however, get knocked out after a five game series against the eventual winner in the Semifinals. In the following RiftZone event, they ran all the way through to Finals, where they defeated their previous adversaries in a dominant 3-0.

Over the past five events, Tribe Gaming have claimed two thirds, two fourths, and a first place finish. Will the Battle for the Rift be the second first?

TrovaNova are vying for that tournament favorite title, while some members have left they have kept the same core roster. Notice the ‘Trova’ part of the ‘Nova’ name? They’re partnered with one of the large streaming brands, the ones that bring us some lolesports content, so that should give an idea of how well established this team is.

In all events they’ve taken part in since November, that is 24 events, they have only had a non-podium finish twice. That is nine first place finishes.

When we look at things like RiftZone where they faced other teams that are taking part in the Battle for the Rift, they were knocked out a little early. But going to Rift Showdown EU, they had more success with a third place finish in Groups, a 5-3 record, and then a second place finish after a 3-1 defeat in Finals. Being knocked out of two events by the same team is rough, but they did get the win over them in the Baron Fight event to take third place.

Just looking at history, it seems that TrovoNova, Natus Vincere, and Team Queso will all be in tight competition for first place, but the others are definitely in a position to contest for that $3,000 top spot; none of these teams should be counted out.

But what is Wild Rift?

If you haven’t yet played the mobile game, it might look slightly different to League of Legends. The fundamentals remain the same, but it has obviously been reworked slightly to better suit mobile use.

Wild Rift contains less than half of League of Legends’ Champions, fewer items, and changes to abilities. We saw Rammus have a new Ultimate, which was later put into League of Legends, and abilities like Ashe’s Enchanted Crystal Arrow can be controlled as it flies through the air. Longer range Ultimates also have different displays, while attacks can now lock on to targets, to make it more mobile friendly.

With quick game times, fewer Champions, and changes to items, it is likely we’ll see different Champions picked with a different meta this weekend compared to what you might be seeing at MSI.

Fiora currently dominates her lanes, able to split push and win most 1v1’s. When it comes to a competitive meta, split push Champions like this are likely to rise due to the increased communication and synergy compared to normal solo queue games.

Vi has also been strong for a while, and being tanky with a ton of crowd control makes her super strong, especially when it is easy to land on a mobile game; the point and click Ultimate shouldn’t be overlooked.

Galio has seen buffs recently, and with a priority on AP Champions, he is primed to neutralize them. In a similar way, Tristana has seen buffs so should see a rise in priority. Her scaling mixed with her ability to reset and jump around in fights makes her very powerful.

Wild Rift has seen nerfs to enchanter items, which brings tank supports to the forefront. Big engages and the ability to soak up a ton of damage makes Alistar a perfect Champion; especially since he can act as a counter to other engage Supports.

While the map is generally the same, the terminologies and positions have switched up. The Toplane is called the Baron Lane, since it is nearest to Baron. Mid lane remains the Midlane, but Botlane is the Dragon Lane in a similar way to the Baron Lane; and Jungle exists between it all. These roles support the same classes of Champions as League of Legends.

In general, the game will likely be faster paced and recognizable for those who haven’t seen it before. With such high caliber players, be ready for outplays and hype moments, as well as a learning experience supported by the broadcast team!

Make sure you're here for 17:00 CEST on Saturday, May 15th, to watch the first round of the Battle for the Rift! Every game is getting streamed, meaning four Best of 3 series to start our weekend - https://www.twitch.tv/giantslayerlol