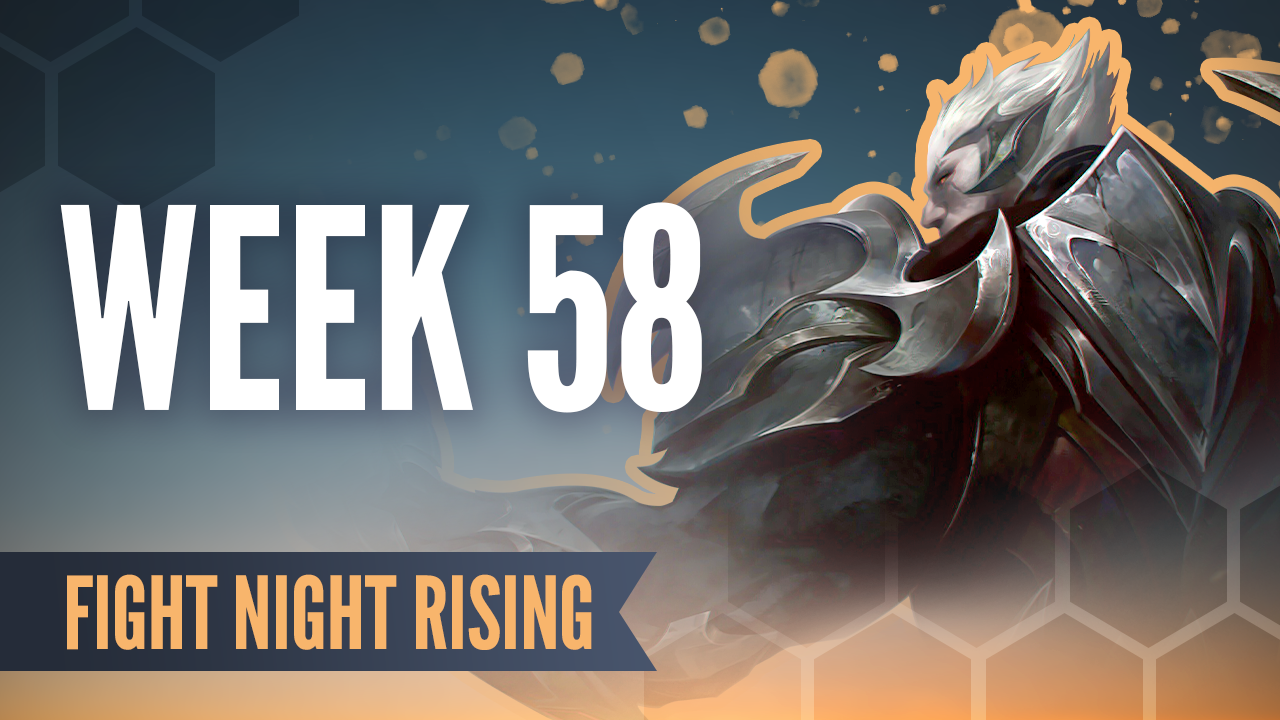 We kicked off this set’s tournaments with a star-studded group of competitors. Eight Challenger-ranked players from around the globe joined us for the inaugural Fight Night: Rising of Set 5.

Dawnglade was one of the first to reach Challenger in Set 5 and has been #1 on the OCE leaderboard for a good portion of the set so far.

Ch1wy was the first player to hit GM on the LAN server and has ended every set in high Challenger.

Sphinx and KilljoyMex have been Challenger in every set since Set 1, while Marcel P ended Set 4.5 at #17 on the NA leaderboard.

Since Set 5 is relatively new, we decided to focus more on the game-winning boards. The comps, the carries as well as their early, mid, and end game. I've also included short guides to the most successful comps played today.

Mid Game: At level 6 he rolled down most of his gold to find Taric and Rell.

He played Taric, Rell, and Nautilus for an Ironclad Knight frontline and added Ashe for Verdant.

End Game: At level 8, Thresh and Nautilus joined the party for 4 Knight. Lux and Ryze added Mystic. Once he found Kayle, he removed Ashe and Varus.

End Game: He transitioned into 6 Legionnaire. He added in Diana for Dragonslayer, Nightbringer, and her backline disable.

He opted to play Garen over Darius to break the enemy Skirmishers shields and to activate the Dawnbringer trait for his Riven. He managed to two-star his Kayle and Garen and it was enough to take the win against Dawnglade’s 6 Skirmisher comp.

Early Game: Dawnbringer Legionnaire start with an early Riven and two-star Aatrox and Kha'Zix. He added Nidalee for 4 Dawnbringer at level 5.

Mid Game:  At level 6, he added in LeBlanc with Blue Buff. He built a Dawnbringer Spatula to hit 6 Dawnbringer. He two-starred his Katarina and swapped it in over LeBlanc.

End Game:  At level 8, he transitioned into an Aphelios comp that used Karma as the secondary carry. He slow-rolled at 8 to upgrade his units and was able to three-star his Aphelios.

At level 9, swapped out his extra Nightbringers and added in the Legendaries. Darius for Nightbringer, Ryze + Kindred for Mystic and Ranger, and Volibear + Ivern + Heimerdinger for Revenant and Invoker.

Mid Game: At level 7 he rolled to find 4 Knights and 2 Ironclad.

End Game: At level 8, he added Lux and Kindred for Mystic. In an amazing high roll, he found 3 Kayles rolling only 20 gold! He was able to catch key enemy units each round with his Zephyr. At level 9, he added in Morgana for 3 Mystic against his remaining opponent's Vel'Koz comp.

Nightbringer Aphelios has been a strong comp since the set’s inception and was the top-performing comp in Mortdog Madness: Reckoning along with the now-extinct Zoo comp (RIP Zz’rot Abomination).

Despite consecutive nerfs to Aphelios, the comp is still solid and snatched 25% of the tournament’s Top 4 spots.

Aphelios’ preferred items are Rageblade, Deathblade, and Bloodthirster (BT). Morgana, Diana, and a fourth Nightbringer (Darius, Yasuo, etc.) are the staples of this comp. Kindred is by far the best Ranger for this comp as she provides Mystic and is a great unit overall.

You can use Ironclad Knights as your frontline (Rell + Nautilus + Thresh) during the early-to-mid game, then swap them out for Garen + Darius or Volibear + Ivern.

This comp is all about surviving until Kayle reaches her 4th Ascension. Kayle is an amazing unit that can be played in a wide variety of comps including Knight, Legionnaire, Redeemed, and Legendary comps.

She was in three of the four winning comps today (75%-win rate). Ch1wy won his two games playing 4 Knights, Rell, and Lux for Redeemed and Mystic.

Ryze’s AOE stun makes him one of the best Mystic units to run especially if you aren’t playing Rangers. Fun fact: he was also featured in three of the four winning teams. Sphinx also ran Kayle in a 6 Legionnaire comp but Draven and Morde did most of the heavy lifting pre-Kayle.

The three key units in this comp are Draven, Ryze, and Morde. Add in another Forgotten champion (Thresh, Viego) and you have Forgotten Legionnaire. Throw in a Kindred or Lux for Mystic and some Knights to frontline. You could also go up to 4 Legionnaire if the game gives them to you.

The best item for Draven is Rageblade because you don’t get enough attack speed from 2 or 4 Legionnaire. A damage item or two like Last Whisper, Infinity Edge, Runaan's, or Deathblade is key.

You could also run a defensive item like GA or BT as his third item. Morde is your secondary carry and likes Gunblade and Jeweled Gauntlet or defensive items like Warmogs, Bramble Vest, or Dragonclaw.

This is one of my personal favorite comps because it can get online early. Jax absolutely needs BT and Runaan's, and preferably QS as his third item (GA, HoJ, or IE are also okay). The Shadow Runaan’s and QS are insanely strong on this Hammerholder.

Kennen is the secondary carry in this comp and Morello is the best gift you could give him. Rell and Nautilus round out this comp providing the 3 Ironclad synergy. Against magic damage-heavy lobbies, you could switch them out for Mystic units (Morgana, Kindred, Ryze).

Ultimately, this comp generally loses to comps with heavy physical damage resistance like Knights Kayle, but it is a solid mid-game comp if you can hit the Jax early. If you are finding a lot of Jax and are uncontested, you could slow-roll at 8 for a three-star Jax.

Or you could go 9 and add in some strong Legendaries such as the armor reducing Darius. You probably want to drop to 3 Skirmishers: Jax, Viego + Nidalee/Lee Sin (depending on the match-up and which God-King you find) to make space for the shiny 5-costs.

Ch1wy is one of the best players on the LAN server, ending on High Challenger rank in every set! He won Games 1 and 4 with Knights Kayle and Top 4'd in Games 2 and 3 with Aphelios and Legendary comps.

Our OCE Challenger Dawnglade started slowly with a 6th place finish in Game 1 but turned it around with a second-place average over the last three games. He played Ironclad Skrimisher comps in two games and also grabbed a win with a three-star Aphelios to snatch second place overall.

With the release of any set, players might discover new comps that shift the meta overnight, while nerfs and buffs can make or break a viable comp. Forgotten Vayne is an example of a strong comp that was practically non-existent last week and is now making waves in ranked games.

There are also situations where two-star Legendaries can elevate the strength of your comp to new heights! If I manage to two-star a Legendary unit, I generally try to find a way to squeeze it into my comp. Now get out there and play some games!