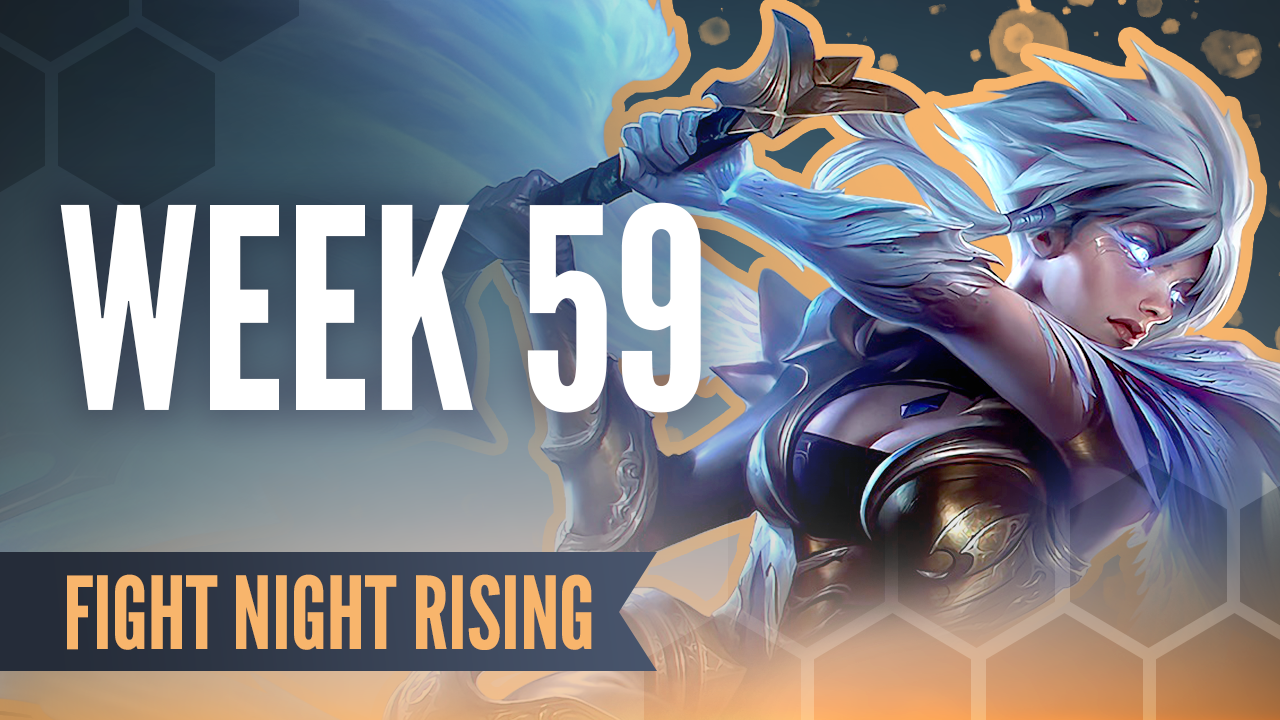 After barely making it into the Top 3 last week, Marcel P showed up big time, setting a new record for the highest number of points in a Fight Night tournament! Marcel broke SleetTFT’s long-standing record of 36 points by winning three games and placing third in Game 3 for a 37-point total!

In this tournament recap, we’ll take an in-depth look at what Marcel played at every level in each game; his comp, main carry, item holder, etc.

But before that, I was able to ask Marcel about the strongest openers, his favorite items, and how he made the leap from Master to Challenger!

Q: What do you think are the strongest openers? (level 4 - 5)? I saw you played Redeemed Legionnaire Knights and Helion Skirmishers.

Marcel: In the current meta it's definitely Skirmishers, not because of the trait but because the units are all really good, especially Pantheon and Trundle. Abomination with itemized Kalista is also solid.

It's hard to win streak with AP items in the current meta since there aren't many great Shojin holders early game, and if you slam Blue Buff you're forced into Karma who's not great right now.

Q: What is your favorite item right now?

Marcel: Shojin in AP (i.e. Vel'koz or Invoker) comps (mostly because you absolutely need it or some way of generating Mana quickly) and Runaan's in anything else.

Runaan's is quite good early game and can be used very well by Jax or Yasuo and is a decent third item on Draven or other AD carry units like three-star Varus and Ashe.

Q: I noticed that you never pre-leveled to 4, but instead chose to hold pairs. Is there any case where you'd pre-level or is it always better to hold pairs for a chance to two-star units? And if you do pre-level, how often do you do it?

Marcel: I've actually been experimenting lately with mostly pre-leveling to 4. I think it just depends if you want to play around 1-cost two-stars or if you are trying to skip those and play around one-star 2 and 3-costs early game.

Not pre-leveling gives you a better shot at a full loss streak if you want to keep that option open, which I did do (5-loss streak opener) in my 2nd game where I played Katarina carry.

Q: What were the biggest factors that helped you make the jump from Master/GM to Challenger?

Marcel: I made the jump from Master/GM to Challenger in Set 4 (although I ended the set as GM), and have been consistently Challenger since Set 4.5, lately hovering in higher ranks (mostly top 20).

One thing (among many others) that's helped me make those jumps is learning and getting comfortable with different spike/roll patterns.

And it really depended on 1.) odds for all the units (not just the carry unit) he wanted to hit, and 2.) When he needed to spike because these comps typically dropped off in stage 5.

I spammed so many questions in his Twitch chat (and I still often do! In many channels and even on Reddit) and strongly recommend this approach to people wanting to improve at TFT.

He was beaten out twice by Althenian’s Ironclad Dragonslayer Skirmisher board, but fortunately for him, Stryggar’s Vel'koz took down Jax and friends.

In the final round, Marcel’s Thresh was able to pull Vel'koz out of the corner and Blue Buff Ryze dished out the disables while Draven wailed away on the enemy team.

In his final fight against tae2n’s Skirmishers, the Mystic made the difference as his Morgana would have been converted to the dark side by Viego’s magical power! Instead, Morgana was able to cast and disable the Quicksilver-less Jax, giving Marcel the win in Game 2.

There were four Skirmisher players in Game 3 and in the Top 3, Jirachy’s Jax trounced Marcel’s Three-star Trundle. But the eventual winning comp was Kuzma’s 6 Forgotten 4 Legionnaire 3 Cavalier comp featuring a Morde with a Forgotten Spatula.

In the final fight against Jirachy’s Skirmishers, Kuzma ended the round with 10 units alive: eight of his original nine champions plus two converted by Viego’s wiles!

Coming into Game 4, Marcel had a 10-point lead on the rest of the lobby. This meant that he could go 8th and still win the tournament.

Stryggar’s three-star Ashe and Ironclad Knights proved to be a worthy opponent for Marcel’s Skirmishers.

In their first match-up, Ashe managed to continuously interrupt Viego’s cast while Stryggar’s two-star Darius successfully took on the rest of the Skirmishers, bringing Marcel down to 9 HP.

In the final round, Marcel was able to grab a Darius to shred the Ironclad armor and also managed to two-star his Rell and Kennen.

At the last second, he positioned his Viego opposite of Ashe. The upgrades and positioning changes paid off and Marcel was able to deal a lethal 25 HP and take the final game!

Stryggar played Vel'koz, Draven, and Ashe comps to grab third place and the final returning slot in next week’s tournament.

Skirmishers took more than half of the Top 4 spots today, while Forgotten Draven, 4 Invoker, Vel'koz, and Assassin comps also showed up in the Top 4.

Can Marcel extend his run on Fight Night and follow up with another win, or will another competitor dethrone the new king? Find out next week on Fight Night: Rising 60!