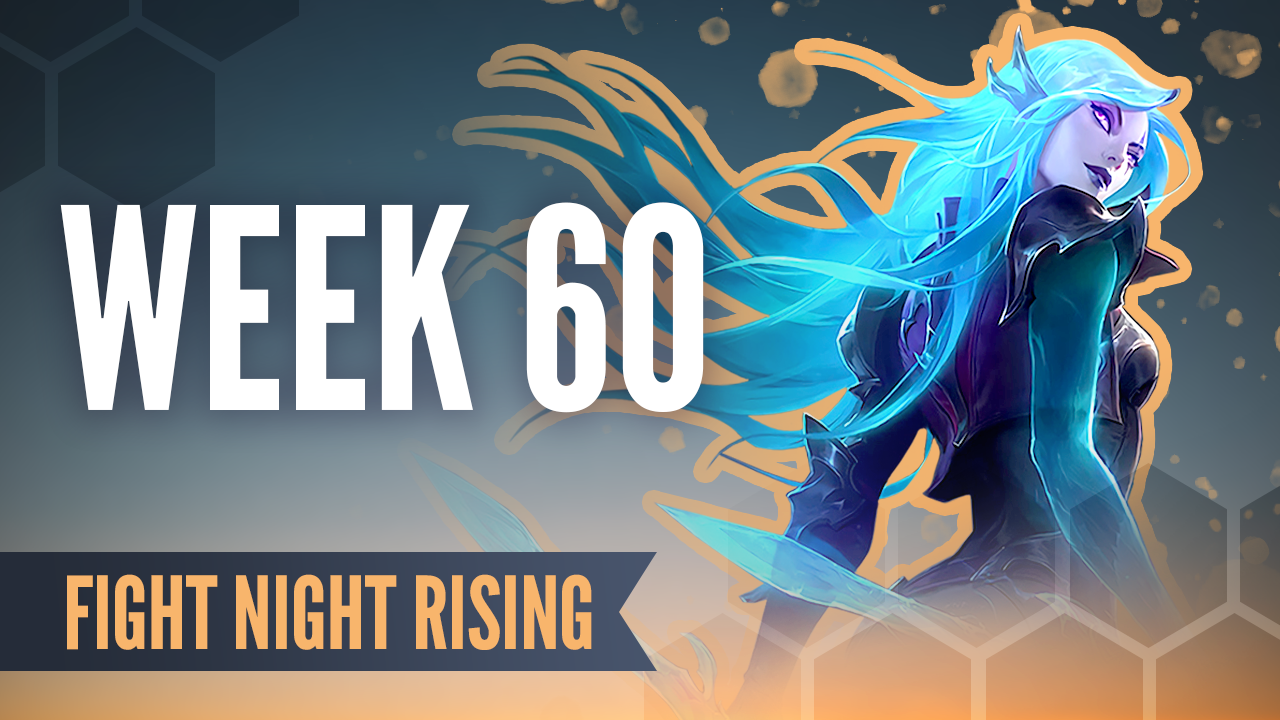 On Thursday we held our 60th Fight Night: Rising tournament! Last week’s Champion Marcel P was unable to make it to this week’s Fight Night because he was prepping for the Challenger Series.

We had participants from five different continents in today’s lineup! Let's jump right into the action!

Stryggar was at the top of the lobby for almost the entirety of Game 1. He played a 4 Brawler frontline with Assassins in the back, using Katarina as his item holder for Vel’Koz.

At level 7, he transitioned into Redeemed Spellweavers and later splashed in Ivern and Heimerdinger for Invoker and Renewer.

Gyalubaby’s reroll Forgotten Spellweaver Cavalier comp rounded out our Top 3. His three-star Hecarim proved to be a formidable force but was taken out by Omaestrow’s very deadly Vel’Koz.

In the final round, the Omaestrow’s Abomination Variation was able to overpower Stryggar’s Redeemed Team, giving Omaestrow the win in Game 1.

Game 2 saw jollyfaker dominate the game from after the first carousel! He started with a Helion Knight Spellweaver comp then transitioned into a 4 Spellweaver Redeemed Helion board.

At one point he had 85 HP while the next highest person had only 22, but his 9-round win streak was finally snapped by Gyalubaby’s Skirmisher comp. When it came to the Top 4, he had 71 HP while the rest of the Top 4 was on single-digit HP.

Sage’s Draven comp with a Forgotten Spatula on Morde put up a good fight, managing to take two rounds against jollyfaker.

But the third time around, jollyfaker swapped in a two-star Garen for the Nautilus and the added magic damage amplification enabled Vel’Koz to slice through the enemy team and take the game.

Sage spent most of Game 3 at the bottom of the lobby. At level 7, he was able to find a two-star Draven and put in 4 Dragonslayer. The true carry of his comp was his double Deathcap Morde.

He took a loss against Dawnglade’s Kayle comp, but Dawnglade was knocked out in the following round. The two other comps in the Top 3 were playing Draven as well, so he added 3 Ironclad to counter the heavy physical damage.

Coming into Game 4, Sage led the lobby with 19 points, but jollyfaker, Omaestrow, and Stryggar were hot on his heels with 18 points each.

Sage’s Draven Skirmisher comp was out in seventh along with his chance of winning the tournament.

Jollyfaker was next on the chopping block. His Aphelios comp featuring a two-star Darius was melted by the enemy Vel’Kozs.

This left only Omaestrow and Stryggar in contention for tournament victory. Joining them in the Top 3 was top OCE challenger Dawnglade.

Dawnglade had managed to find 6 Skirmishers early on, using Udyr as the item holder for Jax. He went on a 6-round win streak which ended when he faced justniice’s Vel’Koz. On his level 8 rolldown, he hit two-star Morde and Diana, then found his two-star Jax a couple of rounds after.

He picked up a Skirmisher Spatula off of the carousel and was able to add in Rell (for Ironclad) with 4 Dragonslayer at level 8.

In the final round, the Rageblade on Dawnglade’s Diana enabled her to cast and interrupt Vel’Koz’s cast, giving Dawnglade the victory in Game 4. Dawnglade had won the battle but in the end, fell one point short of requalifying for the next Fight Night.

Omaestrow took the series playing Vel’Koz and Ranger comps. Stryggar finished just one point behind Omaestrow and will be joining again next week for his third consecutive Fight Night appearance. We'll also be seeing more of second-runner up Jollyfaker next week.

Skirmishers, Vel’Koz, and Draven are dominating in the current meta, but the upcoming patch is looking to turn the meta on its head. Vel’Koz, Draven, and four of Skirmisher champions are looking at nerfs in the next patch. Kayle’s HP will be nerfed as well.

The upcoming patch will feature more than 20 champion adjustments, 10 item changes, and 4 trait adjustments! Hopefully, that will mean a larger variety of viable comps and an emergence of new ones!

Tune in next week to find out which comps will end up on top in the upcoming patch and to see if Stryggar can further extend his attendance record!