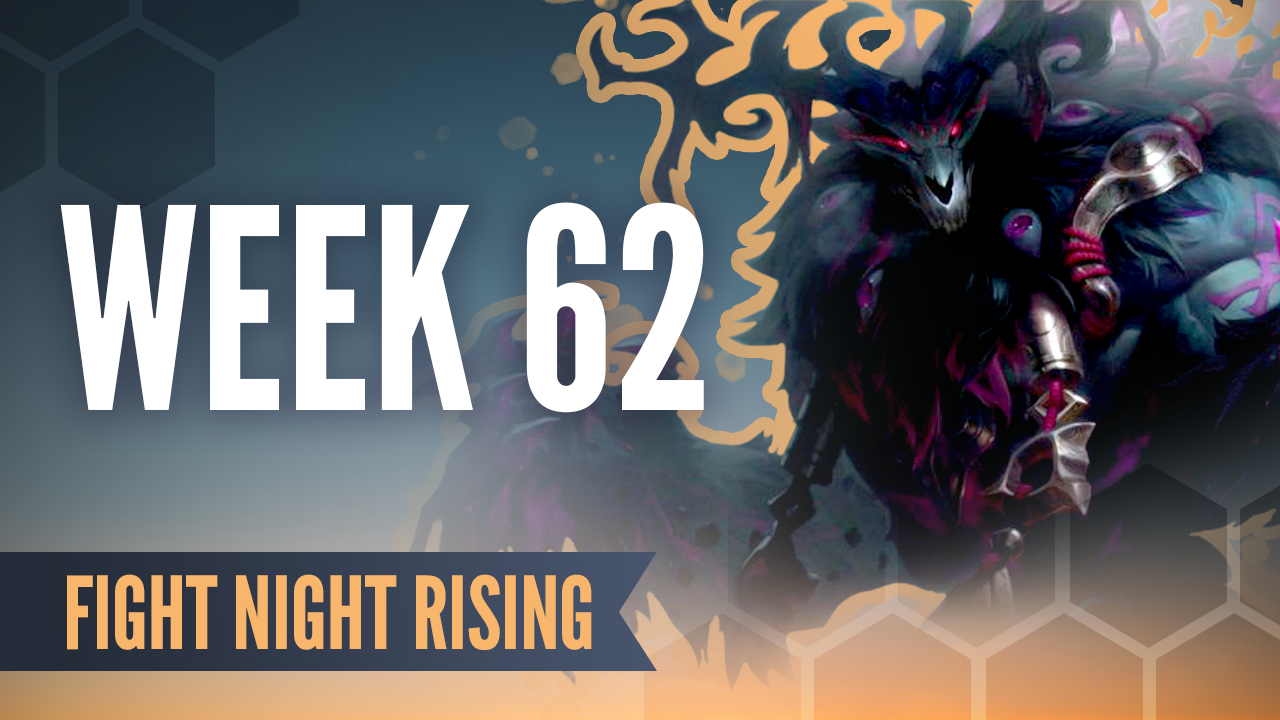 A B-patch on Wednesday nerfed Varus, Sett, Lulu, Kennen, and the 4 Cavalier trait a day before Fight Night: Rising 62. As a result, carry Varus failed to make a single appearance throughout the tournament.

Dragonslayer Nightbringer comps that utilized the Yasuo and Morde carry duo won two of the four games. A Forgotten Revenant Assassin board scored a win and a high-end Invoker Abomination board took the final game.

Last week’s winner Omaestrow showed up strong in the first game, taking a win with a Dragonslayer Nightbringer board that featured three three-star three-cost units: Yasuo, Lee Sin, and Morgana.

Javaday managed to squeeze into the Top 4 with an Abomination board that used Riven as its carry with a three-star Lulu.

He was taken out by Kaune who was running a Coven Assassin comp powered by a three-star Katarina.

In the final round, Omaestrow’s Nightbringers faced off against JollyFaker’s Abomination Renewer comp that included two-star Teemo and Heimerdinger.

The three-star Lee Sin with Jeweled Gauntlet, Hand of Justice, and Archangel's Staff managed to walk into the backline to deal a massive 18k of damage! He did similar destruction against Kaune’s board and knocked out both players, securing a first-place finish for Omaestrow in Game 1.

Ajswagatron dominated the early game with a Dawnbringer Legionnaire board, taking his first loss at stage 4. Coming into the Top 4, he had 60 HP while in second place Omaestrow had only 18!

Omaestrow was running Coven Assassins with three-star Nocturne and Katarina. He was matched up against AndiiDzn who was running a Dragonslayer Skirmisher board that included three-star Trundle and Pantheon with an itemized Yasuo.

The Nocturne melted the Dragonslayers, sending Andy out in third. At the same time, Kaune’s Aphelios comp was taken out by the Dawnbringer Legionnaire board of Ajswagatron.

Omaestrow found a Viego and dropped Coven to play 6 Assassin and Forgotten. The three-star Assassins were too much for Ajswagatron's Dawnbringers to handle and Omaestrow took Game 2 on a seven-round win streak!

Nxyer led the lobby with his Abomination Brawler comp up until the beginning of stage 5. But his comp started to fall off and he ended up going out in fifth place. Omaestrow’s Dragonslayer Legionnaire comp fell in the following round after his Morde was caught by Ajswagatron’s Shadow Zephyr.

In the final round, Ajswagatron’s Abomination Legionnaire comp fell to the ghost of Javaday’s Abomination Hellion comp. At the very same time, Kaune’s Yasuo and Morde were able to dismantle the real Javaday, giving Kaune the win in Game 3.

Coming into the final game Omaestrow was ahead of the pack and guaranteed a spot in the Top 3. The other two spots and the finishing order were still up for grabs.

JollyFaker was at the bottom of the lobby for most of the early game with his Abomination Spellweaver comp. At level 6 he was able to find a Ryze for 4 Abomination with Forgotten, Spellweaver, and Brawler.

He built a Spellweaver Spatula and leveled to 7 to put in 4 Spellweaver. He had two Neeko’s Helps and was waiting for a Legendary champion.

At level 8, he found a Teemo and instantly two-starred it. He dropped to 2 Spellweaver and added in Volibear, Ivern, and Lux.

At level 9, he added in Heimerdinger and swapped out Lux for Kindred. When it came down to the Top 2, his 15-round win streak was ended by Javaday’s Hellion Teemo comp.

JollyFaker swapped out his Kalista for Lux to increase his team’s magic resistance but he still took a loss in the round that followed.

He contemplated taking out Abomination to put in 4 Mystic but was able to two-star his Heimerdinger and see how that would work out. The upgraded Heimerdinger was able to cast, dealing huge damage to Javaday’s team, making JollyFaker win the round and final game!

Flexible play was the name of the game for our friend from EU as he played a different comp each game, winning with Forgotten Assassin and Dragonslayer Nightbringer comps.

Kaune came in second place and seemed to favor Dragonslayer with the Yasuo and Morde carry duo.

NA Challenger Javaday beat out JollyFaker by a single point to claim third place. He incorporated 4 Abomination into his comp in three of his four matches.

The strongest comps today were:

In his post-game interview, Omaestrow shared some of his tips for success.

Can Omaestrow extend his reign or will a new challenger knock him off of his throne? Tune in next week to find out!