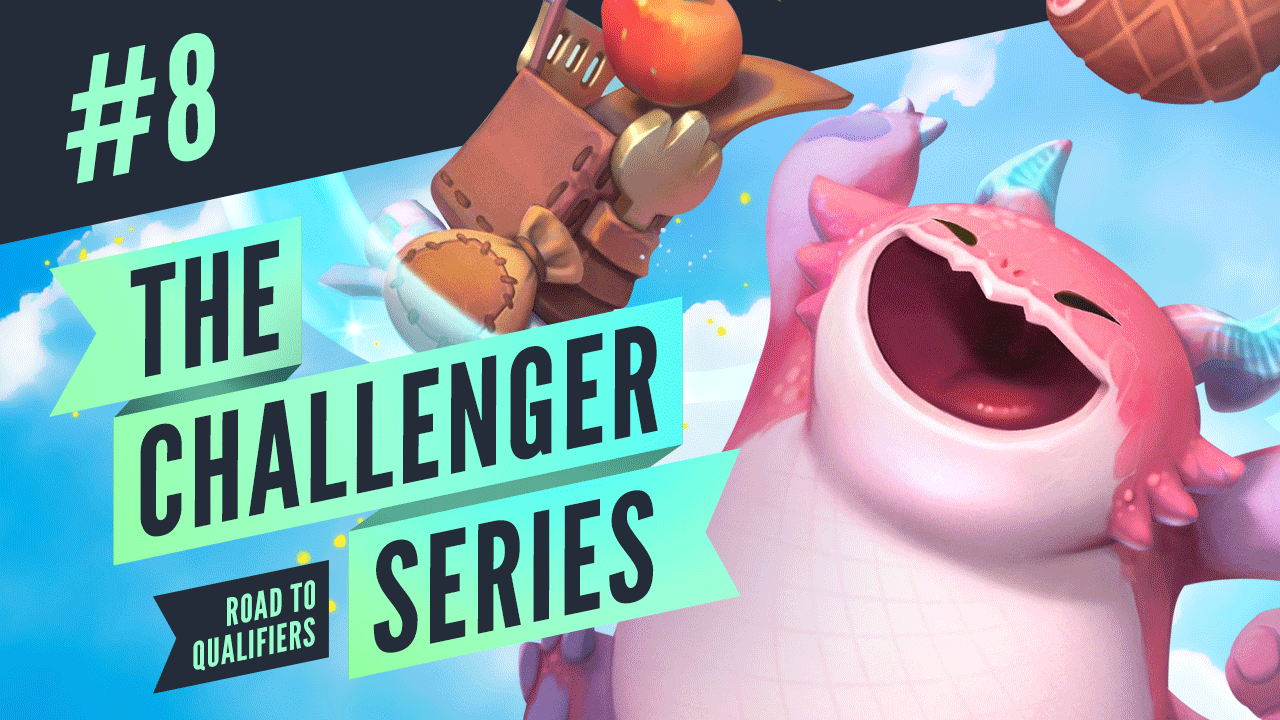 Eight of the top NA Challengers went all out in the Challenger Series finale.

Overall, four of the six games were won by Slayer comps (Olaf, Trydamere) and a Kayle comp also claimed a single victory.

In today's game recaps, I'll be sharing the early, mid, and end game compositions of each of the game-winning comps played today.

Dragonsoul, Slayer, and Kayle comps found the most success in today's games.

Dragonsoul was used in a wide variety of comps including Olaf Slayer, Dragonsoul Mage, and Tristana Sharpshooter.

Lee Sin was the most popular 5-cost, appearing in 11 of the Top 4 final boards, while Swain was seen in 8.

Early Game: Camp started with a Belt and built Sunfire Cape on his Chosen Yasuo. He played Duelist + Janna for Enlightened.

Mid Game: He played 6 Duelist with Kalista as the item holder for Olaf. He sold his Chosen after the 4th Carousel and found a Chosen Chogath. He sold his Chogath, 2-starred his Olaf, and switched into Slayer Dragonsoul, adding Lee Sin for Duelist as well as Swain + Morgana for Syphoner. Braum and Aatrox provided the Vanguard and Dragonsoul synergies.

End Game: He leveled to 9 and added in a Chosen Divine Irelia. After a few more rounds, he sold it and found a Chosen Yone. With 55 HP on a 10-round win streak, he ended the game with a double KO against Rablinnn's Kayle comp and Kagero's Tristana reroll comp.

Mid Game: He itemized Shivana with Sunfire Cape, a Mage Cap, and Runaan's Hurricane. He added Brand for Mage and at level 7 he sold his Chosen, found a Chosen Mage Annie, and built another Mage Cap. This brought him to 7 Mage + Elderwood + Brawler.

At level 8 he found a Chosen Dragonsoul Asol. He grabbed an Elder Spatula off the carousel for his Shyvana and transitioned into 6 Dragonsoul and 5 Mage (Mage spat was moved from Maokai to Swain).

End Game: He played Chogath for lockdown until he found Morgana 2 and added Syphoner. He was able to 3-star his Shyvana and on the final round, he found a Swain 2.

In the last round, Jirachy positioned their Lee Sin well, kicking Shyvana out of the arena and knocked Swain into the corner. It was a 1v6 but the 2-star Swain was able to take out the remaining six in Jirachy's Olaf Slayer comp. Lee Sin couldn’t reach the Swain since it was cornered by other units and the AOE damage took Lee out before he could complete his game-winning punch. As it turns out, 5 Mage + 6 Dragonsoul Swain is a pretty strong unit.

Early Game: Kagero played an early Sharpshooter Tristana with Vanguards. Then they added in Dragonsoul and two more Sharpshooters. They slammed Runaan’s and double Jeweled Gauntlet on their Tristana.

Mid Game: He added in Aatrox and Sejuani to make 4 Vanguard 4 Sharpshooter + Dragonsoul.

End Game: At level 8, he found a Chosen Warlord Tryndamere and transitioned into Slayers + Vanguard. They added Azir for Warlord and Pyke + Zilean for Cultist + Slayer and Lee Sin for Duelist. He had 8 Tryndameres for 5 rounds. He then built up his economy and rolled down 40 gold to find the final copy to 3-star their Tryndamere.

The golden Slayer was too much for the remaining Kayle and Elderwood comps to handle, and Kagero ended on fire with 68 HP to spare. Also, they built 3 Zephyrs from their item drops throughout the game.

End Game: After the Stage 4 NPC round, he leveled to 8 and found a Chosen Divine Kayle. He was able to 3-star his Kindred with the help of Loaded Dice. He played Irelia and Jax for 4 Divine and added Shen for Mystic and Adept. He filled out his comp with 4-cost Vanguards. He stayed at level 8 to 2-star his champs.

With his two Spatula items (Vanguard and Divine), he was able to remove Jax and Sejuani, replacing them with Xayah and Yone. He ended the game on a 7-round win streak and took out Jirachy’s Wukong comp in a decisive final round.

Early Game: Ramblinnn played early Brawler + Sharpshooter with a Chosen Fortune Tahm. They then added in Brand and Shyvana for Dragonsoul. At level 6, he was able to find Katarina and activate the Fortune synergy for the first time in the game (at round [3-1]).

Mid Game: At level 7 he played 4 Brawler + Dragonsoul and Fortune.

End Game: On his rolldown at level 8, he found a Chosen Slayer Darius and transitioned into 6 Slayer + Vanguard. He added Swain + Braum for Dragonsoul. He was able to 3-star his Darius and equip decent items (Hextech Gunblade and Vanguard spat). The Triple Threat Team of Tryndamere, Olaf, and Darius was too much for the lobby to handle, with him ending the game with 44 HP and on a 9-round win streak.

Mid Game: At level 7 after the Stage 4 Carousel, a Chosen Dragonsoul Olaf appeared in his shop. He immediately leveled to 8 and played 6 Dragonsoul 3 Slayer + Sejuani for Vanguard.

He econ’d up and went 9. Then added Morgana for Syphoner. He sold his 2-star Sejuani to put in a 1-star Aatrox to counter the Kayle and Asol comps.

End Game: He went down to 14 HP, while Ramblinn’s Tryndamere Duelist Slayer comp was still at 63 HP. He thought that Sejuani's AOE stun would work better vs the melee Duelists, so he swapped out the Aatrox. He picked up a 2nd Shroud from the Rift Herald and was able to cover most of the board. Olaf proved to be the stronger carry and took out the Tryndamere in 4 rounds.

Dragonsoul is very hot right now! Dragonsoul Slayers, Dragonsoul Sharpshooters, Dragonsoul Mages, Dragonsoul Eldermages, Mages with Dragonsoul; take your pick! Kayle is still a top contender! If you are playing a Slayer comp, don't limit yourself to Olaf; Tryndamere is nearly as strong and can utilize the same (and other) items.

And with that, the Challenger Series comes to a close. But this is not the end for Camp, and 23 more of NA's top TFT players will be playing in the upcoming TFT Fates NA Qualifier 4 starting February 26! With all these NA powerhouses going up against each other, we know it's going to be a good one!