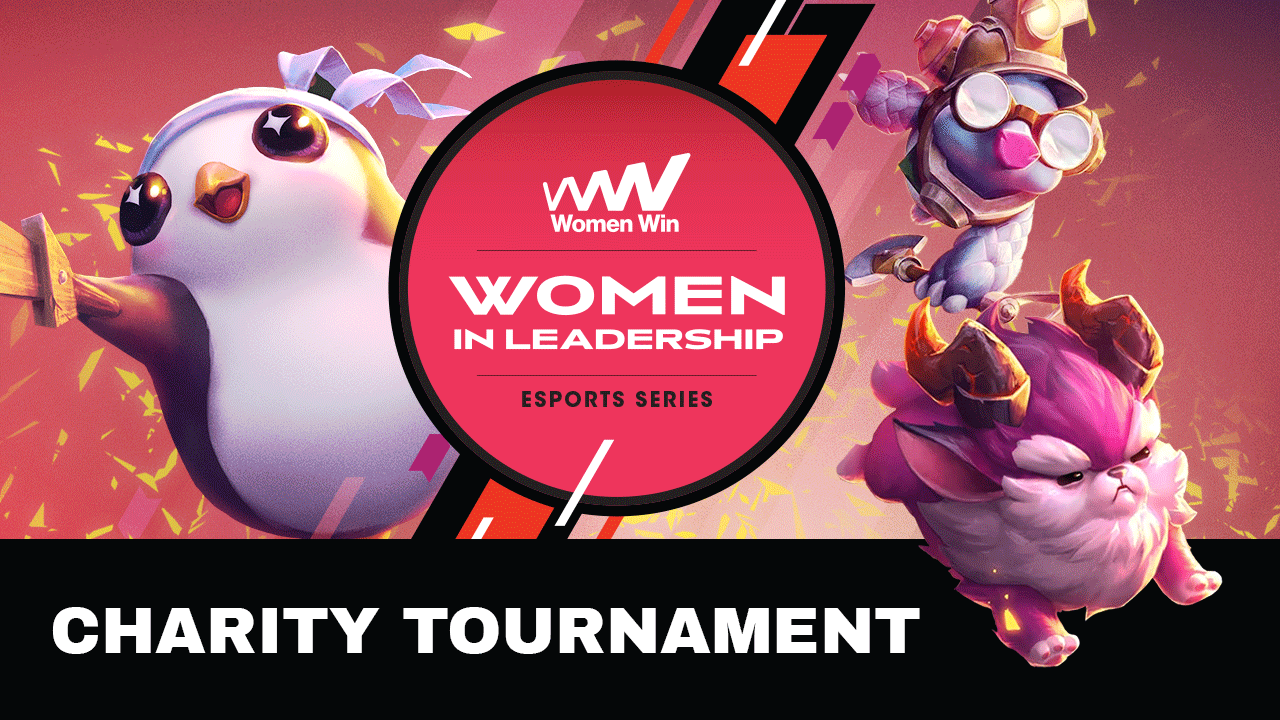 We teamed up with Women Win to raise funds for charity through an exciting TFT tournament featuring a $2,000 prize pool!

Women Win is a global women's fund that envisions a future where every girl and woman exercises her rights.

The tournament featured eight highly-formidable players from all over the world. More than half of our competitors have hit Challenger rank this set! You can read more about them here.

The games were extremely close and on average, the winning players had less than 17 HP by the end of each match. Let's check them out now!

HappyMuffinn took the first game of the tournament with a high-end Spirit Sharpshooter comp. She put her own unique spin on the comp, opting to play Janna as the Locket holder and forgoing Diana and Kindred altogether.

It was an extremely close first game and when it came down to the Top 5, Sarabellum led the pack with a measly 15 HP.

In the round that followed, iCandyyyy’s Keeper comp and lunaloveee’s Slayer comp were both knocked out, leaving only the Sharpshooters and two Slayer comps in contention for the win.

Sarabellum’s Slayer comp included five two-star Legendaries and looked unstoppable as it took out the opposing Slayer comp with ease.

However, HappyMuffinnn had a secret weapon: a Giant Slayer on Tristana! Combined with a Last Whisper on Sivir, they tore through the Legendary board like a hot knife through butter, securing the win for happy HappyMuffinnn.

Luna won Game 2 with a stacked Kayle comp. Her two-star Lee Sin with Blue Buff and Hextech Gunblade played a key role in her victory, sending opponents flying out of the ring in every round.

It was another nail-biting game and when it came down to the top 4, the top 3 players sat at 19 HP. HappyMuffinnn’s Dragonsoul Mage comp was the first to fall; taken out by Betsy’s 6 Slayer comp. Betsy suffered the same fate in the following round at the hands of Luna’s Kayle comp.

Sarabellum faced off against Luna’s Ghost and it looked like the end for her as the One Punch Man pummeled Sara’s Swain off of the board.

However, the damage over time (DoT) from Swain’s ability took out the Lee Sin before the Swain could hit the bottom (of the board?), and Sara lived to fight another round.

Lee Sin got his revenge in the final round as he and Azir kept Swain disabled, preventing him from casting his life-giving ability. Kayle finished off the rest of the team and closed out Game 2 for Luna.

Coming into Game 3, HappyMuffinnn and Sarabellum were tied for first with 16 points, while Lunaloveee followed close behind with 14.

Game 3 saw Luna with a decent HP advantage over the rest of the Top 4. She sat at 58 HP while her healthiest rival had only 21 HP. But she saw her lead diminish and after two losses she was down to 23 HP with all four players still alive and kicking!

Betsy and Jane both fell in the following round, setting the stage for a rematch of Game 2's FINAL BATTLE!

In the final round, Luna’s two-star Sett was poised to slam a two-star Yone into the rest of his friends, but when his mana bar was nearly full, Sett was taunted by the enemy Shen who absorbed the full power of Sett's rage!

However, Sett missed the rest of Sara’s board entirely and following that blunder, the enemy Samira and Olaf wiped out Sett and Co., and this time, Sara came out on top!

HappyMuffinn secured her second win with a massive 8-Brawler comp. She started off with a Fortune Mage comp and was in 7th place when she grabbed a Sett off of the carousel. The Lucky Lantern dropped a second Neeko’s Help and she was able to instantly two-star her Sett. From there, she pivoted into a Brawler comp, finding a Chosen Shyvana along the way.

When the Top 4 was decided, HappyMuffinnn was on a 10-round win streak thanks to her itemized two-star Sett and three-star Shyvana. iCandyyyy’s Keeper comp took out Luna’s Dragonsoul Mages, but fell to Emily’s Kayle comp in the following round.

In the first battle with the Brawlers, Emily managed to position her Kayle out of harm’s way for the majority of the fight, and with her Rageblade stacks ramping up, she was able to take out the Beefy Brawlers. Emily's win brought both players into 1-hit territory.

In the final round, Sett picked up Emily’s Sejuani and slammed her into her friends, taking out the majority of her comrades. Chogath was also able to hit Kayle with its Rupture, slowing down Kayle’s Rageblade stacks.

This time, the Brawler damage was too much, forcing Kayle to raise her white flag, and HappyMuffinnn was happy with the win.

Coming into the final game, HappyMuffinnn had 29 points and one point more than Lunaloveee, who had a one-point lead over Sarabellum. Betsy sat at a fairly distant fourth place with 20 points.

A win in this closing game would mean first place overall for our Top 3 contenders. However, it was Betsy’s Fabled comp that reigned supreme at the end of the match.

Betsy played an early Fortune comp with Brawlers and Assassins. She cashed out on a 6-round loss streak and her loot included two Neeko’s Helps. The gold from her cash out helped her reach level 8 early, and she found a Chosen Vanguard Aatrox.

HappyMuffinnn was the first of the contenders for tournament victory to fall in 7th place, and Lunaloveee joined her in 6th shortly thereafter. In order to be crowned the tournament winner, Sarabellum only needed to place 4th.

And when it came down to the Top 4, she was still alive and there, with 20 HP to spare!

But Betsy’s Fabled comp was too much for Sara’s Kayle comp to handle. A three-star Neeko with a Vanguard Spatula, 6 Vanguard + 4 Mystic synergies, and a two-star Zilean were unbeatable, and Betsy closed out the game with 37 HP and a 6-round win streak.

With her consistently high placement throughout the majority of today’s games, Sarabellum is our winner of the Women in Leadership TFT Event. Believe it or not, it was her first time to participate in a TFT tournament!

With two impressive wins and a different comp played each game, HappyMuffinnn flexed her way into a second-place finish.

Lunaloveee rounded out our Top 3 and favored Slayer and Kayle comps throughout the tournament.

So far, our viewers and players raised over $700 for Women Win!

And while the TFT event may have concluded, we still have more Women in Leadership tournaments on the horizon, starting with the Valorant edition on April 2-3! We hope to see you there!

If you're interested in watching back the tournament, check out the full VOD cast by NekkraGaming and Itsrissakah on our YouTube channel!