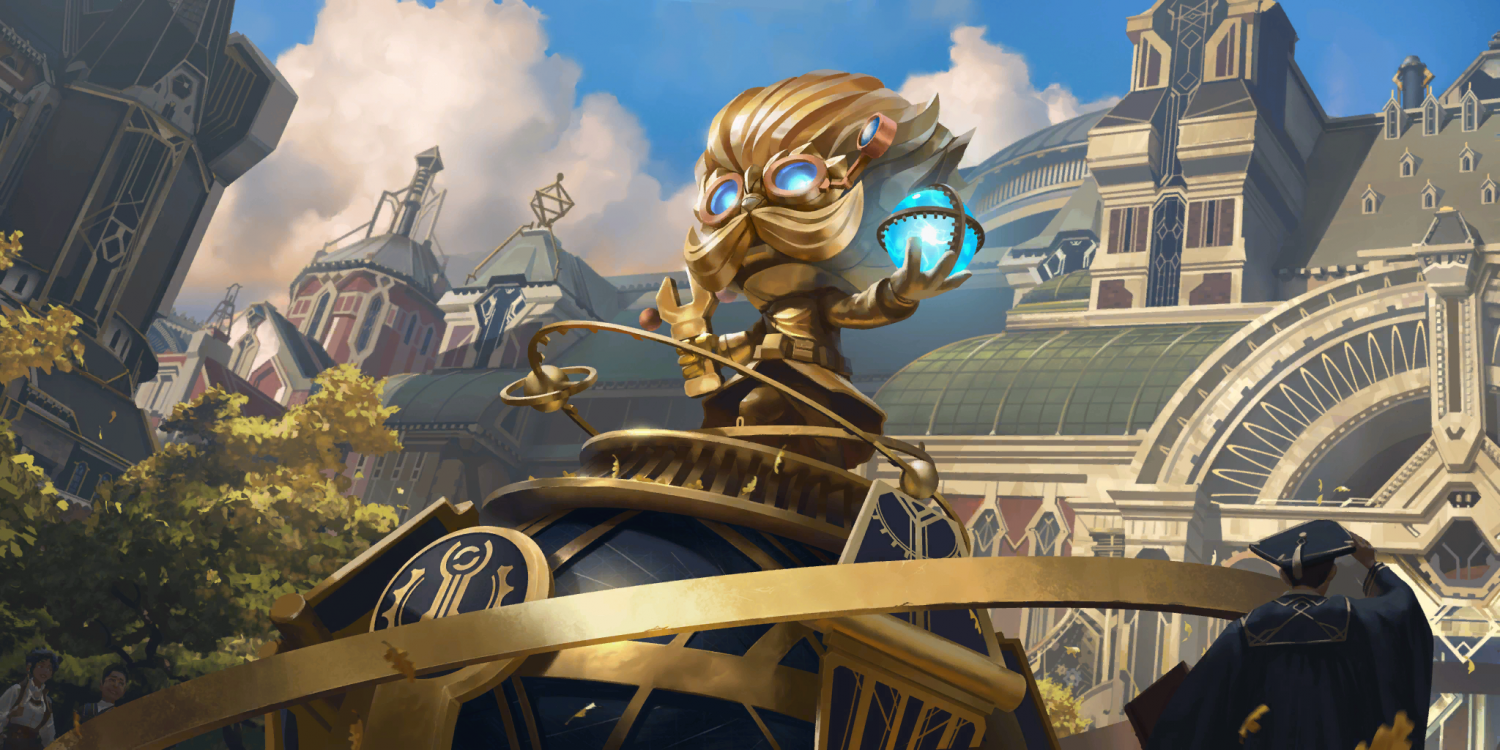 I always like to start analysis off with a disclaimer:

It is much, much easier to find correct lines absent tournament pressure from a comfortable environment with infinite time, and neither player should be disparaged for their play not being what I deem optimal. Please do not take this as me disparaging these players for their play, not only do I have advantages not afforded them, but I could also simply be wrong.

I will be taking Wraptero’s perspective as I think it is more interesting.

With mulliganing, I think it’s very important to understand how you win this matchup. The main crux of the matchup is Targon’s ability to repeatedly heal to 20, so Beot needs to set up one of three situations:

As a result of this, Wraptero should be looking for ways to prevent as many of these from occurring. Particularly 1 & 3 as with mind meld you have time to find a way to manage it later in the game.

Your options on killing Twisted Fate are quite limited, with an attack token Boxtopus works, as well as Solari Priestess’s Invoke hitting Falling Comet and Meteor Shower. Wraptero also has 2x Sunburst as “comets”  in his maindeck.

It is important to note that Wraptero will have the attack token on turn 4 so Boxtopus can threaten a Twisted Fate on turn 4.

Managing a board of elusives is generally done with Boxtopus or Aphelios’ moon weapons.

I would confidently mulligan everything other than gifts from beyond. The fangs is tolerable, but no real reason to keep it when you have Aphelios as an incredible upside to mull for.

Gifts I think are worth keeping. It insulates you from the downside of having nothing to do early and is a 4 mana Boxtopus which is really not bad in the matchup. Also having an activator for Aphelios isn’t the worst, but I wouldn’t keep something like guiding touch just to have an activator.

While I understand the desire to hard mull for Aphelios, I think gifts really cuts down on the ways you can just end up with a handful of bricks, and doesn’t hurt your Aphelios chances that much.

Beot discards mind meld on T1, this is very notable as one of the ways Wraptero loses is already gone.

T2 is very interesting from Wraptero.

First, Wraptero no longer needs to worry about the late game situation. Mind Meld is gone, and you have a guaranteed answer to one Twisted Fate with Sunburst, so as long as Wraptero manages the board and keeps Twisted Fate in mind they will win.

As a result, I would just pass here.

This is because of two things.

Beot plays Bot and Wraptero could have bluffed pale, but that is much too risky. Also, as soon as you hesitate your buff will get called so you really can't attack after a short pause.

Notably, Wraptero does not burst pass off the petal and shouldn’t. Giving a free priority to Beot would make this attack much simpler as you can cast both the poro and the ignition before swinging with no threat of Cresendum making a good blocker.

This block makes little sense to me.

Wraptero has a 2/1 to chump with, and all the tools to win a late game situation, Aphelios to manage the board, second Aphelios if this one dies, sunburst and plenty of Boxtopus for Twisted Fate.

Calibrum will kill this bot eventually; no need to worry about killing it now.

Again, Wraptero is winning if this game goes late and they maintain Aphelios. Giving up an Aphelios when you have a chump blocker just to deny one or two ignitions is very strange to me.

In a more abstract way of considering this, this play only makes sense if you are overly concerned about Ballistic Bot, in which case the T2 pass line would have been a much stronger way to manage that concern.

Proceeding from the line taken.

Wraptero needs to develop a Boxtopus to threaten a potential TF, so Crescendum is easy. You want to cast moon weapons to get closer to leveling, and a normal Boxtopus is exposed to Twisted Fate Blue Card into Mystic Shot.

Regardless, not attacking to deny the TF develop is great. It’s a common mistake in this matchup to attack for some minor damage freeing your opponent to develop TF unopposed. Wraptero needs to make sure Twisted Fate dies as fast as possible after hitting play, and Beot is trying to maneuver Twisted Fate into play to get some free exp off draws for turn.

You never allow Twisted Fate + pick a card to go to the next turn if you have a choice, so Wraptero sunbursts.

It’s possible Wraptero doesn’t even attack this turn to deny Twisted Fate development so there’s very little reason to not open pass into the fleeting cards.

Wraptero needs to clear this crescendum sometime, but I’m not sure now is the time, casting it at the start also locks them off playing temple this turn, which is an option I would like to leave open, though I think it’s unlikely to be correct.

Only now that Beot tapped below Twisted Fate can Wraptero attack.

I would like to see everything but Aphelios attack with the Boxtopus challenging the 1/1.

Getting a point of damage on the Boxtopus is actually valuable since it makes temple buff Aphelios which is quite good.

Getting 2 damage on the poro is also valuable since it makes it die to calibrum, so you don’t mind the block.

I like casting the Calibrum, but I would target the Burblefish. Beot has a pick a card coming, and the poro is only a single additional point of power, and killing Burblefish denies iterative improvements unless Beot has a second Burblefish.

If this was a much larger amount of power (certainly 3 additional, probably 2) I understand killing the larger threat, but making your opponent’s cards significantly worse at the cost of one health is probably worth it.

Hush is quite poor in the matchup, it’s basically a very bad single combat that has some upside vs suit up in exchange for being less flexible and more expensive. Hushing a suited up poro is probably as good as it's going to get.

The rest of this turn is fine for Wraptero, but I want to point out that spending the Aphelios way back on T3 for a ballistic bot, now means you don’t have a backup here to redevelop

Red card would be brutal into 4 X/1s, so you develop everything into an open attack once Beot Taps below the mana threshold

Not attacking with Zoe I dislike, There’s little it can even do that’s better than trading off here and exposes Wraptero to red card killing a blocker when they could just induce the trade before that can happen.

Starshaping on Boxtopus is saving 4 points next turn and clearing a unit, as opposed to healing 5 points, which I would say is easily worthwhile.

I think Cosmic Rays is the best card in the pool, but without a celestial to activate it, Living Legends is better. A ton of cheap celestials could be close to Cosmic Rays, and it also could just be Cosmic Rays with the activator all in one.

Wraptero is probably obligated to cast Gravitum because this open is 7 points with the potential for fizz spell but chooses not to.

Beot develops more units to the board, casting two Zapp Sprayfins before attacking

Wraptero casts gravitum when given the chance, and plays Aphelios to continue trying to manage the board.

Wraptero could have chumped with Zoe to get an extra moon weapon, but you want to severum -> infernum anyway so it would be wasted.

Rest of the turn is pretty simple, cast the Zoe drawn off Pale Cascade and the calibrum.

We want to sequence this turn so we cast living legends off only our unit mana to get the maximum mana refill.

Severum -> Burble -> infernum is the easy sequence. Then we have the choice of the burble spell or Duskpetal.

Functionally do we want a spell they cast or a random celestial?

I think this is actually Duskpetal for one key reason, Zoe is at 6/10. Maximizing the chance of getting cheap celestials, makes a lot more celestials game winning, if you manage to flip zoe any of

Are game winning, with most situations involving the charger or the destroyer also winning, and a few celestials probably winning without a Zoe level, Cosmic Rays and Meteor Shower likely doing it.

The other way I can argue for Duskpetal, is spell thief is likely to find a random burn spell, which is going to be good for killing one attacker which is about as good as you need this spell thief to be, and you can still cast it after the living legends if you have the mana to.

The Celestials that Wraptero finds are simple to play, they have enough to answer the entire board either with removal or blockers. Elusive on the entire board from Zoe opens up some extra attacks but Wraptero is 100% to win regardless.

After T10 there are no relevant choices for either player, Wraptero will win on T12 no matter what.

If Beot still had Mind Meld they could draw stress testing discard with cannon into mind meld and beat some hands from Wraptero but having no mind meld there is nothing to be done.

Micah Lupa (Drisoth) is a longtime CCG player, originally playing Magic: The Gathering since the early 2000s. Recently moving to Legends of Runeterra, he’s been highly ranked on the masters tier leaderboard since, hitting rank 1 multiple times. Notable accomplishments of pioneering TF Fizz, and showing off with playful trickster in Fight Night.

Note from the editor

We hope you enjoyed this analysis of one of the more interesting matches from the Cosmic Creation Seasonal Tournament. This is our first foray into expanding Legends of Runeterra content onto the GiantSlayer website, and we hope to include even more written content in the coming weeks and months.  If you have any feedback or thoughts for future content, please tweet at us @giantslayerLoR or send me an email directly Blevins@wisdom.gg.