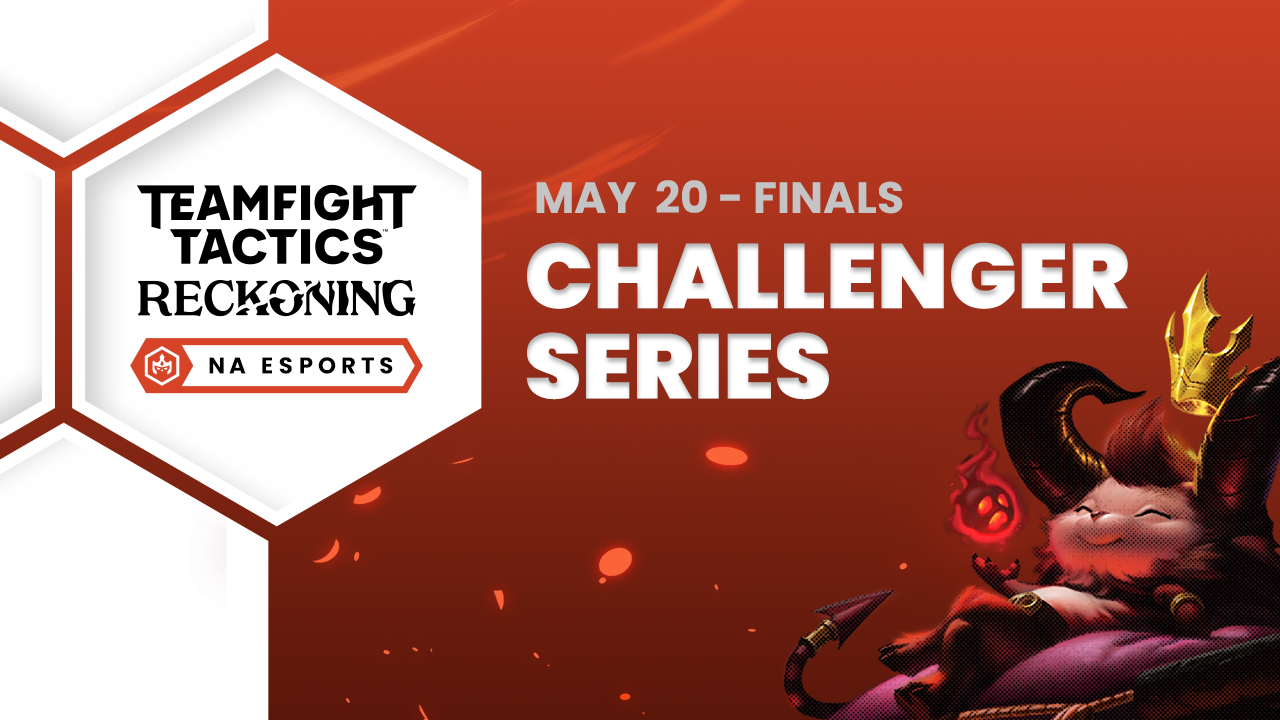 We kicked off the Set 5 Challenger Series this past week! 16 of the top NA players competed for $2,800 in prize money and the first slot in the $20,000 mid-set finale.

GrandVice8, the newest addition to Team Liquid’s TFT squad, was the point leader at the end of Day 1. He won two of his five games and played four different comps including a reroll Spellweaver Cavalier that netted him a second place.

Hot on his heels was Spencer, who finished just a point behind. He won three of his games and played Assassins in four of his five games, including a 6-Forgotten Assassin comp that used Draven as its secondary carry.

Cloud9’s k3soju barely squeezed into the Top 8 by beating sètsuko in the tiebreaker.

On Day 2, players needed to first reach 24 points and then win a game, or hit 40 points in total to be crowned champion.

TSM’s Kiyoon was at the bottom of the pack until Stage 4 and was able to get first pick in the first three carousels.

He finally stabilized at level 7 with 4 Spellweaver (Lux Spellweaver Spatula) + Redeemed with the perfect Vel'koz items (Shojin, JG, sHOJ). He added in Ryze for Abomination and Mystic synergies.

He went on a 9-round win streak before taking a hit against Spencer’s Coven Assassins.

Skirmisher comps grabbed second, third, and fourth places. But the disables from Rell, Zyra, Ryze, and the Abomination, kept Vel'koz out of harm’s way and Kiyoon took Game 1 on a 5-round win streak.

Mismatched Socks played a very strong Skirmisher board with a double Redemption on Pantheon and did not lose a single round until Stage 3. His 8-round win streak was finally broken by Soju’s Dragonslayer Legionnaire comp. He slow-rolled at level 7 to three-star his Udyr and Trundle.

He eventually found a two-star Jax but did not have any leftover items for him. He tried to find Morde for 4 Dragonslayer but had to settle for 3 Ironclad instead.

Socks dropped down to 7 HP against GV8’s Jax-powered Ironclad Skirmishers. But in the final round, he managed to take out Spencer’s Coven Assassins while Spencer took out GV8. It was a very close win, but a win nonetheless.

Kiyoon repeated his Game 1 strategy, but this time he had to play Viktor for 4 Spellweaver and did not add in Garen. And at level 9 he was able to two-star his Kindred and played it over Lulu.

When it came down to the Top 4, PockyGom’s 4 Dragonslayer Legionnaire comp took Kiyoon down to two HP!

But Kiyoon was able to take out both GV8 and Pawnup’s Skirmisher comps for a rematch against the mighty Morde! And this time, Vel'koz and Co. were able to vanquish the Legionnaire cores and take Game 3.

Spencer won Game 4 off the back of a Coven Assassin board that featured three-star Ivern, Morgana, Nocturne, and LeBlanc. His level 6 board was 4 Brawler + Abomination that used Kalista as the item holder for LeBlanc.

At level 7 he transitioned to the Coven Assassin board and slow-rolled to three-star his units. He three-starred his Morgana and LeBlanc and found 8 Iverns and Nocturnes at level 7. At level 8, he was able to three-star both his Ivern and Nocturne.

When the dust settled, Kiyoon was the last one standing of the three, but the three-star team was too much for even Vel'koz to handle, and Spencer ended the game with 39 HP to spare.

Coming into Game 5, Kiyoon had already surpassed the 24-point mark and could end the tournament by placing first. Spoiler alert: he went out in fourth.

PockyGom started with an early Skirmisher board and was set up to play Jax, but he found a two-star Draven before seeing a single Jax. He switched over to Forgotten Draven but kept in 3 Skirmisher for the Dragonslayer buff.

Joining him in the Top 3 were Kurumx and Pawnup’s Skirmisher comps. Pawnup’s Jax + Morde combo was able to take out Kurumx, paving the way for his 1v1 versus Pockygom.

With both players in the 1-hit territory, Pockygom prioritized the positioning of his Shroud, catching both Diana and Rell in its path.

The Shroud placement was the deciding factor as neither Diana nor Rell were able to get off their crucial abilities before they were taken out by Draven. And Pockygom got the win in Game 5.

By Game 6, five players had already reached the 24-point threshold.

GV8 had a dream start with Skirmishers and was in the lead for most of the game; he managed to two-star his Viego as soon as he hit level 8.

But coming into the Top 3, both PockyGom and Spencer were on winning streaks. If either of the two took first place, they would be the tournament winner!

GV8’s Jax managed to 1v6 PockyGom’s team and end Team Vel'koz’s 6-round win streak. But Spencer was the first to fall, leaving GV8 as the last hope for a Game 7.

PockyGom clumped his units into a corner and the Skirmishers were no match for the Vel'koz + Teemo combination. PockyGom took Game 6 and the tournament!

PockyGom played Draven, Skirmisher, and Spellweaver two games apiece. But his true love was Dragonslayer (and Morde), ending with 4 Dragonslayer in 66% of his games!

Kiyoon played Spellweaver Abomination in all six of his games. Sometimes it paid off but other times it didn’t. Two firsts and two eighths put him in second place overall.

With his win here, PockyGom has secured his spot in the $20,000 Reckoning Mid-Set Finale! Following Dawnbringer Cup as well, 19 slots are still up for grabs! The others will have more chances to qualify through the upcoming tournaments! Keep up the climb and maybe the next article will be about YOU!