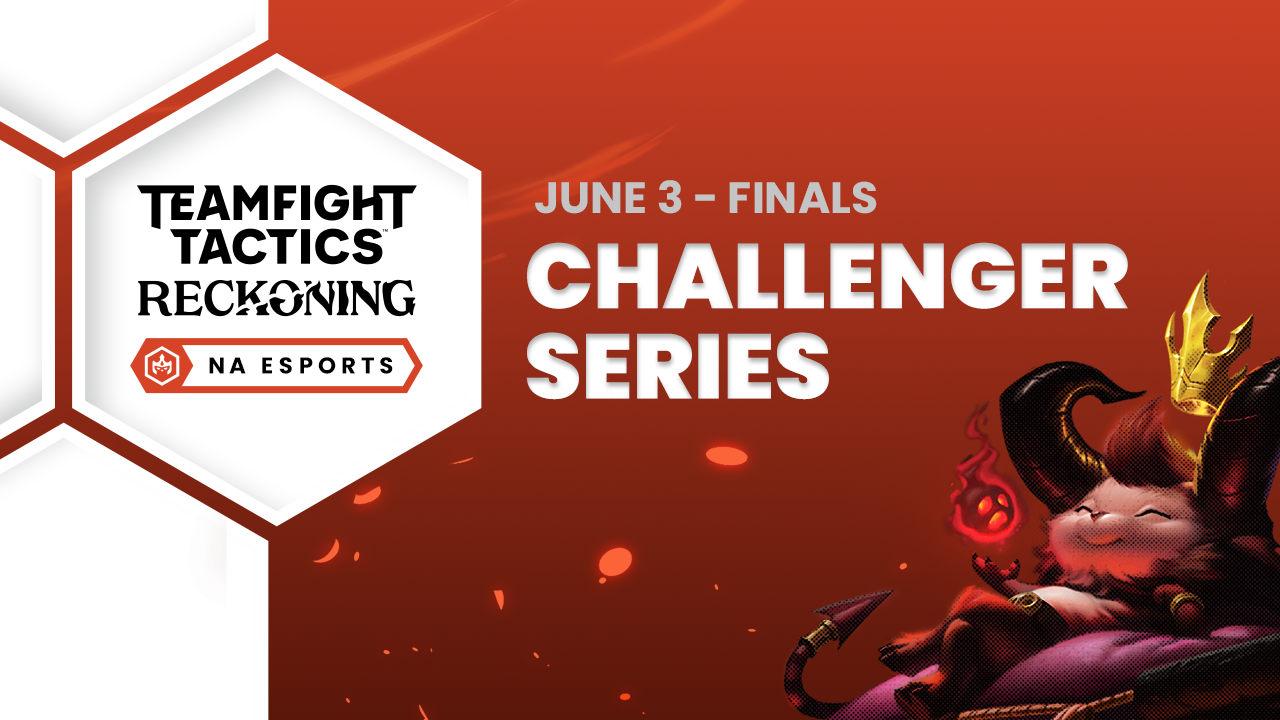 The second iteration of the Challenger Series continued with 16 of the best North American TFT players vying for a $2,800 prize pool and a spot in the Mid-Set Finale.

Our participants consisted of eight returning players from the Challenger Series #1 who managed to maintain their spots at the top of the NA ladder and eight new participants.

Each participant played six games on Day 1. The lobbies were seeded based on players’ snapshots rank, with reseeding every two games based on players’ tournament placements. By the end of the day, the Top 8 players would proceed to Day 2.

Spencer topped the scoreboard on Day 1 playing four different comps in his five matches. He had two wins playing Nightbringer-based comps; first with Aphelios, then with Yasuo.

Sètsuko beat Sphinx in the tiebreaker to claim eighth place overall and move on to Day 2.

To win the tournament, players needed to first reach 24 points and then win a game, or hit 40 points in total to claim tournament victory.

In the best-case scenario, a player could reach the 24-point threshold in three games by placing in the Top 2 every game, then win the tournament in Game 4.

Milk’s board featured an itemized two-star Teemo and Ivern for the Invoker synergy. He was taken out in fourth by Marcel.

In their first 1v1, Marcel’s Volibear managed to hit eight of Sètsuko’s nine units. This led to disabling them and applying the Morello burn to most of the team. Heimerdinger and Teemo followed up with massive damage, taking Sètsuko down to 2 HP!

In the final round, Sètsuko sold his two-star Aphelios so that he could place the Shroud at the start of the round.

He was able to Shroud the Teemo which significantly delaying its cast. Without the Infernal Souls to slow down the enemy team, Ashe was able to make quick work of Marcel’s board!

When it came down to the Top 4 in Game 2, Marcel’s Vel’Koz comp was still healthy with more than 70 HP left in the tank.

After the Stage 6 carousel, he rolled down and was able to three-star his Vel’Koz at level 8 and took out Guubum’s 6 Forgotten Draven comp.

And with that, it came down to another battle for first between Sètsuko and Marcel. Sètsuko identified that Marcel was looking to three-star his Rell, so he held two Rells on his bench.

Unfortunately for him, Marcel still managed to find the golden Rell, and that spelled the end for Sètsuko’s Draven comp. This time, Marcel came out on top!

In Game 3, Marcel managed to barely make it into the Top 4 with an interesting Abomination Teemo comp.

He first faced off against Robinsongz who was running a Spellweaver Cavalier board that featured a three-star Hecarim carry. Milk's Assassins cut through the Spellweavers like a knife through cheese and even the mighty Hecarim was quickly dealt with.

Spencer’s Ironclad Ranger comp was the last obstacle standing in the way of Milk’s victory. But the three-star Assassins sliced and diced through Aphelios and friends in no time, having Milk’s Assassins leap into a first-place finish.

Coming into Game 4, Marcel had hit the 24-point threshold and only needed a single win to take the tournament. This put him in the crosshairs of the other players who went out of their way to make sure that Marcel wouldn’t take a first.

And unfortunately for Marcel, he was out in eighth.

When the bottom four were eliminated, Milk was again at the top of the lobby.

Sètsuko’s Forgotten Assassins took out Guubum’s Aphelios comp to claim a spot in the Top 3.

But in the following round, he was taken out by Milk’s Forgotten Abomination Brawler comp that ran Draven as its main carry.

Milk’s last remaining opponent was Kagero who was running a Nightbringer Legionnaire comp that used three-star Yasuo and Riven as its carries. It was a close battle, but in the end, Yasuo was able to bring down the Big Bad Monstrosity that carried Kagero to a Game 4 victory.

The units that Milk had used to claim victory previously brought about his defeat this time!

Coming into Game 5, Milk and Sètsuko had joined Marcel in the 24-point club.

Milk and Marcel were out in the bottom four but Sètsuko managed to hang on and was in second place when the Top 4 had been decided.

The three-star Karma in Guubums’ 6 Dawnbringer 4 Renewer comp was combined with a two-star Garen with a Renewer Spatula. With a new power assembled, the comp went to town on Sètsuko, crushing his dreams of a Game 4 tournament victory.

Spencer was also looking for a three-star four-cost of his own. His Nightbringer Ranger comp was just one copy shy of a three-star Aphelios.

In their first match-up, the Dawnbringers powered through the Nightbringer board and took Spencer down to 6 HP. It seemed that Guubums had this one in the bag. Spencer knew that if he wanted to have a shot at winning the game, he needed to three-star his Aphelios!

He rolled down to zero, and once his gold ran out, he started to sell his board. Lulu was the first to be sold, Diana next, followed by Morgana. And then it happened, the ninth Aphelios appeared in the shop!

He three-starred Aphelios and put in Thresh and other one-star units to sub for his discarded Nightbringers.

It was a close battle but with his dying breath, the one-star Thresh managed to hook the Karma, buying time for Aphelios to blast down the Dawnbringers and snatch an unexpected win for Spencer.

Marcel’s Abomination Brawler comp was the first to fall. The next round saw Kagero’s Hellion board with a two-star Teemo taken out. Current point leader Sètsuko and his Dawnbringers were the next to be culled. Robinsongz’s Rangers fell in fifth.

The chance for a Game 7 was gone when The Brennonator’s three-star Ashe Ranger comp was taken out. Milk’s Spellweaver Cavaliers also fell in the same round.

This meant a rematch between Guubums and Spencer for first place overall and the highly-coveted spot in the $20,000 Mid-Set Finale!

Guubums ran a Dragonslayer Nightbringer comp that was powered by itemized three-star Pantheon and Yasuo. Spencer had a 6 Forgotten 4 Assassin board with a Cavalier frontline and three-star Katarina carry.

When they met, Spencer had 78 HP while Guubums had only 15. Guubums took the first round decisively and it looked like he might have Spencer's number!

Spencer managed to grab a critical Shroud from the Carousel and dropped to 4 Forgotten. He then put in Ivern and Kindred for Mystic plus Revenant as well as a two-star Diana in over Kha'Zix.

But even with the changes, upgrades, and great Shroud placement, Guubums still managed to come out on top in their second fight.

Guubums took another win in their third battle. But in the NPC round, Spencer was blessed with a second Shroud!

Spencer positioned his Viego to target the weaker units, and the Shroud placement at the start of the round enabled him to Shroud Guubums' entire board. The positioning changes and Shroud usage enabled Viego to survive until the end of the round to take down the nearly unkillable Pantheon.

After a respectable third-place finish in the first Challenger Series, Spencer came back even stronger, winning the final two games to claim the victory and his spot in the Mid-Season Finale! His most played comp was Nightbringer Ranger Aphelios.

DeliciousMilkGG rounded out our Top 3. He took a break during Set 4.5 but it looks like he's back! His most played comp was a Forgotten Abomination team that used Draven as its primary carry.

We’ve still got two more Challenger Series tournaments and the Nightbringer Cup to come before the Reckoning Mid-Set Finale, so get ready for more exciting tournaments this month!