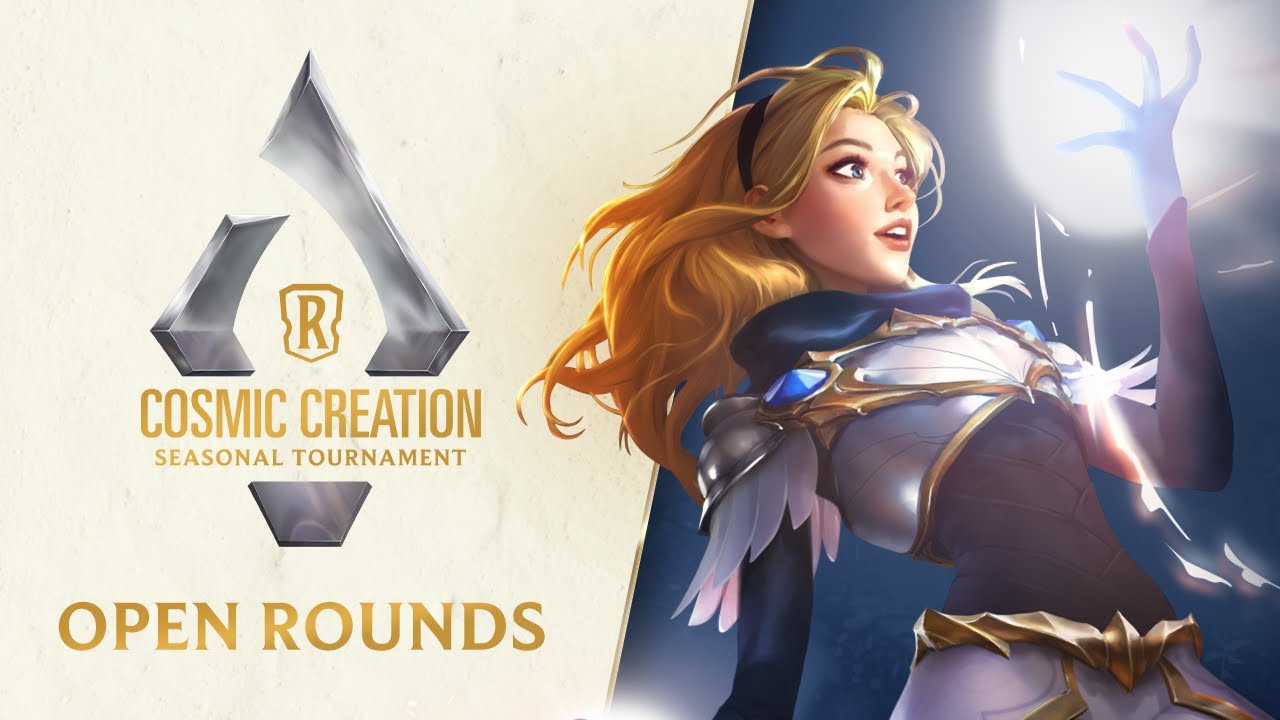 We’ve erected our Monuments of Power, but now it is time to take our place among the stars. With the Seasonal Tournament returning for Cosmic Creation, we kicked things off on Sunday with 1024 players competing in 5 swiss rounds fighting for their chance at the Top 32 and the $20,300 prize pool.

Giant Slayer covered the action “redzone” style on Sunday and we’ll be breaking down some of what you missed here in this article. If you want to catch every moment, you can find the VOD on our Youtube channel. But without further ado, let's launch into it.

We kicked things off by checking in with a familiar face to the Giant Slayer channel, Zinc Elemental, playing his lineup of Fizz/TF, Teemo/Sejuani, and Aphelios/Lee Sin. Zinc was #7 on Giant Slayer’s Top 10 Players to Watch and was coming off a recent Fight Night victory -- as well as prolific tournament success during the Cosmic Creation season throughout the open circuit. We had high hopes starting the day with Zinc and we were not disappointed. Zinc’s Round 1 opponent was Niroku who was rocking an interesting triple Targon lineup with Leona/Asol splashing Demacia, Diana/Elise, and Zoe/Aphelios splashing Noxus. With a quick ban of TF/Fizz from Niroku and Aphelios/Zoe from Zinc the first match was underway with Teemo/Sej vs Elise/Diana.

The match was close until Zinc was able to level his Sejuani on Round 8, rendering Niroku’s board useless to Ignition from Ballistic Bot and mushroom draws, causing board-wide frostbite without any answers in their list. From there it was a quick bleed out and Zinc took Game 1.

This left Zinc with Aphelios/Lee as his remaining deck to claim victory, and against the unit combat focused Targon lists of Niroku’s lineup, this set looked to be over. In fact, it did end rather quickly into the second game; we could see the writing on the wall as Zinc curved into a turn 3 Aphelios and turn 5 Lee Sin with plenty of protection in hand. Just a few turns later on turn 9, Zinc was able to close out a decisive 2-0 with a leveled up Lee Sin and a Deny to protect against any potential defense.

After starting off with a bang in Round 1, we continued the action by jumping over to Minasia, a player who was featured in our coverage of the Monuments of Power Open rounds in December and had a very impressive showing on Overwhelms and TK/Soraka.

The round kicked off with Minasia banning Keg Control and Murphy Law banned TK/Soraka. Just like Zinc in Round 1, we saw Minasia open up with his Teemo deck that once again proved to be a menace in this tournament. Murphy Law opened with Scouts and started very aggressive, bringing Minasia down to 4 health with a wide board before Minasia finally struck back getting a leveled Sejuani online, stabilizing, and eventually using the frostbite stall to close out the game.

In Game 2, Murphy Law queued up Scouts once again, this time taking on Minasia’s final list Fizz/TF. Normally this matchup would be fine for Fizz/TF but Murphy had an ace up his sleeve. Stony Suppressor hit the board early on, with Minasia’s spell heavy Fizz/TF list not having a quick answer. The tempo was lost by having increased mana costs on all of his spells, causing a cascade into a quick and decisive Game 2 victory for Murphy Law. This tied things up at 1-1.

In the final game of the set, Minasia must now defeat Murphy Law’s second deck, a Targon/Demacia list focused around Aphelios. A slow start from Minasia put him behind on board but even staring down an Eclipse Dragon, The Scourge, and a level 2 Aphelios, Minasia was able to keep his cool. He found a Twisted Fate level up and slowed down the offense of Murphy Law. With level 2 TF stalling the board and generating value, this list got to do what it does best and set up a wide board of Wiggly Burblefish and other small elusives to win over the top of the monstrous Targon board. Minasia takes the set 2-1 over Murphy Law.

Minasia would later drop after losing in Round 3.

In our 3rd feature match of the day we jumped on over to former MTG pro JodyMFKeith -- better known in Legends of Runeterra as Nolagold -- with his lineup of Diana/Aphelios, Lee/Zoe, and Fizz/TF, which continued to be a prominent deck throughout the day. Nola would be facing off against TehBrawlGuy rocking Scouts, Fiora/Shen, and TF/Aphelios. Nola banned away scouts while TBG took away Diana/Aphelios, leaving both Fizz/TF and Lee/Zoe as the options for Nola who opted to lead with the latter. TBG started with TF/Aphelios which was speculated to be a Tier 0 deck in the weeks leading up to the seasonal and generally would have been expected to draw a ban. Game 1 kicked off with fireworks as Nola took control with a quick level 2 Lee Sin. He closed it out with a 9/7 buffed up Trickster he pulled from an early Supercool Starchart.

In Game 2 TBG swapped over to Fiora/Shen as he was staring down Nola’s Fizz/TF, which had proven to be an incredibly powerful choice throughout the day. TBG seized the board early with a Fiora and Shen coming down on the curve. However,  the efforts proved fruitless as the flood of elusives from the Fizz/TF list ended up outpacing the slower Demacia deck allowing Nola to close out the 2-0.

Nola would go on to win his Round 4 matchup to timer but would fall in Round 5 just short of qualifying to the Top 32.

By the fourth feature match of the day, the picture started to become more clear on who may be approaching 5-0 and qualifying for Top 32. The sure bet in our eyes was the #1 seed from the ladder snapshot Kevor24, who was currently 3-0 in match score and 6-0 in game score throughout the day. Kevor’s lineup had the usual suspects of Fizz/TF and Zoe/Lee but also featured a more unconventional brew of his own design in TK/Aphelios.

In this round, Kevor would face WhiteLight04 and their lineup of Zoe/Aphelios, Fiora Shen, and Scouts ft. Stony Suppressor. This was promptly banned by Kevor and his spell heavy lineup. WhiteLight responded with a ban on TK/Aphelios and we jumped straight into Game 1 with Zoe/Lee vs Zoe/Aphelios.

The game started off great for Kevor finding both his champions in the mulligan, allowing the turn 1 Zoe to start generating Starcharts. This created an immense amount of value. As the game continued, it became clear that Kevor was in the driver's seat as WhiteLight could not find an answer to Zoe and she was able to level up. At that point, Lee was able to join her on board at level 2 as well and it was lights out on Game 1.

In Game 2, Kevor would face the Zoe/Aphelios list once more but this time as Fizz/TF which the casters continued to note “the only way to beat this deck is to ban it!”. My oh my did Kevor prove them right. After a grueling back and forth, WhiteLight looked like they had the upper hand with 12 health on their nexus and a massive Great Beyond and Destroyer on board threatening to close out the game. Kevor was able to turn it around with a long series of draws using Pick a Card and Rummage and a Mind Meld with 21 spells already cast in the game buffing up his Fizz and two Daring Poros to 21/21. This would close out the game in spectacular fashion, maintaining his undefeated run through the tournament.

With our field of undefeated perspectives dwindling and with the 10-0 dream still alive for Kevor, we decided to stick with him for Round 5 to see if he could make it into the Top 32 as the #1 seed. His final boss would be BlueMan7777777 and his lineup of Fizz/TF, Fiora/Shen, and what do you know, the TK/Aphelios deck that Kevor himself created. Once the ban phase started, both players knew exactly what they wanted to do. Kevor quickly banned Fizz/TF and BlueMan banned Zoe/Lee, our final round would begin with Fizz/TF vs TK/Aphelios.

Kevor kicked things off with an early Fizz. He was able to bait BlueMan into an unfavorable trade using a reduced cost Suit Up and got a TF on board with Pick a Card drawing 3 on the next turn netting a large early lead. BlueMan had Kench in response to try and slow down Twisted Fate but Kevor was having none of it. Pick a Card found Rummage and not one, but two Stress Testings, allowing Kevor to draw 4 and level Twisted Fate. He then used this swing and the level 2 version to prevent Tahm Kench from devouring his Twisted Fate, with the game completely snowballing from there. Kevor took game 1 decisively and showed once again why Fizz/TF should be an auto ban in this format.

With only one game to go to complete his undefeated qualification into the Top 32, Kevor would have a mirror match piloting the deck he pioneered, TK/Aphelios. Kevor started strong putting a lot of damage onto BlueMan’s nexus but things got out of control quickly as BlueMan set up two Veiled Temples alongside Tahm Kench and the big catfish completely took control of the game. No matter what Kevor threw at it this Kench, it would not budge and was fully unbenched. With the level 2 Kench on board sitting at an 11-7 statline alongside a level 2 Aphelios and a Great Beyond being buffed up by moon weapons, it looked as though BlueMan was going to send us to a Game 3 -- but we can never count out Kevor. Kevor invokes a Living Legends, allowing him to find his own Great Beyond. He had enough chump blockers to survive against BlueMan’s board for one more turn and a Wiggly Burblefish buffed up to 5 power. He then uses Calibrum to pop the spellshield on BlueMan’s Great Beyond which was the only elusive blocker available. This was then followed by a hush, leaving BlueMan completely exposed to the elusive threat at 16 health on their nexus. Kevor threatens 19 with The Great Beyond and Wiggly Burblefish. There is a long pause and then… Shen Emote from BlueMan, Kevor takes the set 2-0 and moves on to the Top 32 with an impressive 10-0 game score on the day.

We saw many amazing moments throughout the day from players that made it to the Top 32, but also from those that didn’t. It is always an amazing day to watch just how much talent is out there in the Legends of Runeterra scene and just how impressive it is to endure these 5 rounds and come out unscathed.

We hope you enjoyed the stream if you watched, or found this article entertaining if you didn’t. We look forward to seeing you for the Top 32 on Sunday!