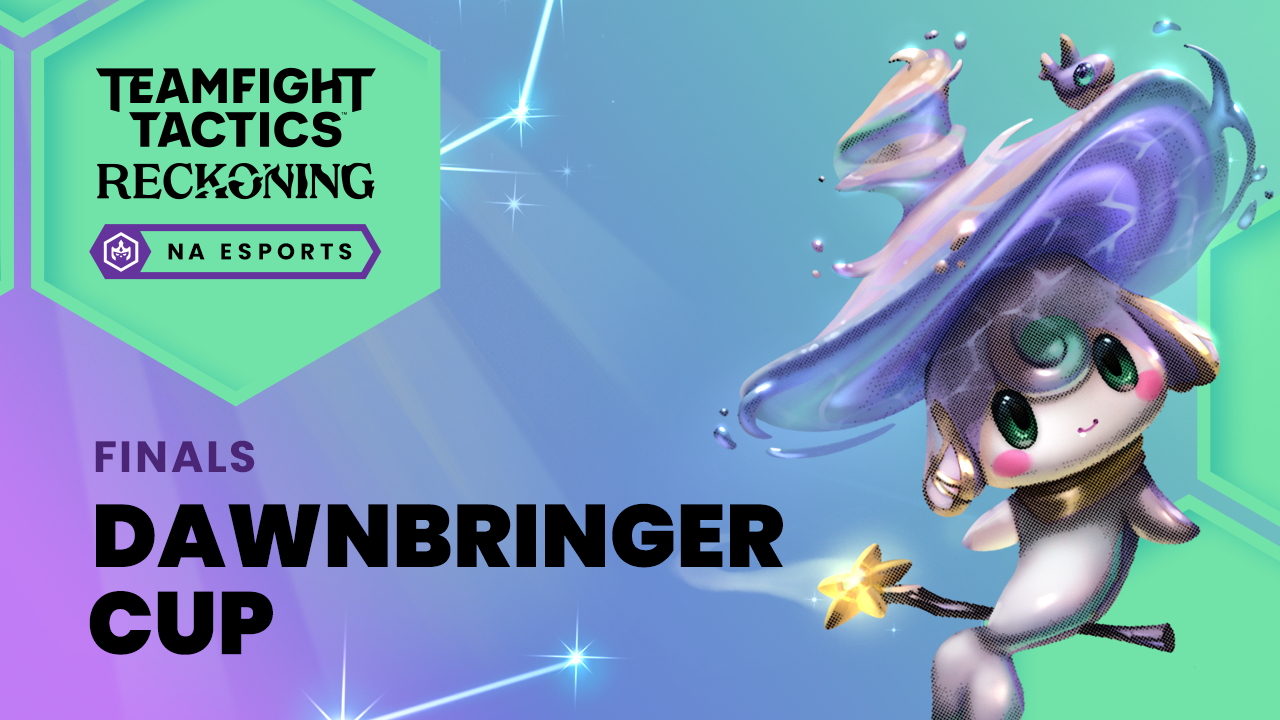 The Dawnbringer Cup is one of two 128-player tournaments for qualifying to North America's Reckoning Mid-Set Finale (the third is the Challenger Series).

The Top 128 players duked it out in this three-day tournament for one of twelve spots in the $20,000 Mid-Set Finale. The Reckoning Mid-Set Finale will also determine the four participants for the NA Regional Finals.

On the first day of the Dawnbringer Cup, participants played a five-game series in lobbies that were seeded based on their in-game LP. The four highest-scoring players of each lobby advanced to Day 2.

Fates Championship qualifier RamKev and rank 7 Marcel P were among the 64 players that were eliminated on Day 1.

On the second day of the tournament, the remaining 64 competitors played another five-game series, but this time they were seeded based on their performance in Day 1.

The bottom half of each lobby was again culled. Four more from the Top 10 ranked players dropped out on Day 2 including former long-standing Fight Night: Rising champion Nostereleven, who lost the tiebreaker against alittlewhiteguy.

The third and final day of the tournament saw the last remaining 32 players split into four lobbies for the final five-game series.

The three highest-scoring players from each lobby would be invited to the Reckoning Mid-Set Finale, while the fourth-place player of each lobby would receive an automatic invite to the Nightbringer Cup.

Incite took Game 1 of Lobby A with a three-star Draven comp. He was knocking on death’s door with 2 HP when he found his ninth Draven and then sliced through the last two remaining opponents.

His Force of Darkness meant that he was able to splash in traits that would have not been possible under normal circumstances. 4 Dragonslayer, 4 Legionnaire, Forgotten, and even 3 Mystic!

Incite took another win in Game 2, this time playing 6 Assassins with a three-star Katarina as his main carry. His final opponent was Volc4884’s Nightbringer Dragonslayer comp that featured a three-star Yasuo carry.

In Game 3, Incite win-streaked with another Draven comp, and faced off against Xnieamo’s Vel’Koz comp in the final rounds.

saltygod12 ended Incite’s win streak in Game 4. He also played Assassins, but this time with Coven using three-star LeBlanc and Nocturne as his primary carries. He took out slippingbug’s Draven comp to claim victory in Game 4.

In the final game, Slippingbug slipped into first place after getting the win with a 6 Forgotten, 4 Legionnaire Draven comp.

GrandVice8 took Game 2 with a stacked Teemo comp in an intense battle against buzzyboo’s Coven Assassins. Gv8 transitioned from a 4 Spellweaver Abomination comp into the high-end Teemo comp with 3 Mystic to counter the heavy magic damage from LeBlanc.

It was a close fight that saw both players exchange round wins and drop into one-hit territory. In the final round, Gv8 backlined his Volibear and Kennen, enabling them to chain-stun Leblanc and take the game.

GrandVice grabbed Game 4 with a Hellion comp that featured a three-star Lulu. 5 Hellion paired with 3 Cavalier (Kennen with a Cavalier Spatula) and the Revenant duo was too much for Emily’s double Redemption three-star Pantheon to handle.

LunaTunes was the victor in Game 1 of our third lobby. They amassed a powerful, fully two-starred 4 Invoker board! The frontline was nearly impenetrable: Garen, Volibear, Taric, Rell, and Ivern! JLin24’s Skirmishers fought bravely but they were outmatched in the end!

Old Lodo took Game 2 with the ever-popular 6 Skirmisher 4 Dragonslayer comp. A Skirmisher Spatula enabled the addition of Kindred and Ryze for Mystic against SleetTFT’s Vel’Koz beams.

Old Lodo grabbed a second consecutive win in Game 3; this time with a Forgotten Draven comp. It was a tough battle for first against Jirachy’s Coven Assassins, but in the end, Lodo was able to come out on top.

LunaTunes took another win in Game 5. At one point Cottontail was at 2 HP while the top player had 73! But Cottontail was able to take out everyone in his path and bring Luna down to two HP. But in the final fight, Teemo walked into Luna’s Vel’Koz’s laser beam and took a loss, giving Luna the victory!

The result of the final game saw JLin24 drop out of third place and LunaTunes take his place, qualifying for the Mid-Set Finale.

Nexthy started strong with a win in Game 1. An Assassin Spatula enabled him to play 6 Assassins with Coven and his deadly three-star Assassin Morgana enabled him to take the win against K3soju and Inikoiniko’s Vel’Koz comps.

ACommonQuail took Game 3 with a spicy Forgotten Draven comp that splashed in Skirmisher. In the final round, the IE/LW combo was able to slice through iniko’s Ironclad Skirmishers and net Quail the win!

NoobOwl showed up big time in Game 4, beating out Dxn’s Spellweaver Abomination comp that included a three-star Nunu (yikes!). NoobOwl ended up with a Teemo comp that including a splattering of Hellion, Renewer, Invoker, Knight, and Revenant.

At first, it seemed that Dxn was poised to win the game, but at the last possible moment, NoobOwl was able to two-star his Teemo and take Dxn from 46 to zero HP in three rounds.

Lobby D was the closest lobby of the four and coming into the final game, only iniko was guaranteed a Top 3 finish. In the end, Inphinit3 took the game with a rarely-seen 4 Ranger comp that featured a three-star Varus carry supported by Aphelios and an Ironclad Knight frontline.

Nexthy needed the win to knock Soju out of third place but his Teemo comp could not survive the incredibly-high physical damage output of the Raging Rangers! And with that, Inphinit3 and Soju were in the Top 3, and Dxn and Quail were out.

inikoiniko finished with the highest points overall! This is one of his first big tournament victories and we are looking forward to seeing him perform in the next one!

Vel’Koz, Draven, and Jax were solid as usual. But Hellion, Assassins, and Invoker-based comps definitely showed up as well.

A huge congrats to the twelve that qualified to the Mid-Set Finale and the four that have guaranteed spots in the Nightbringer Cup!

Now, let’s see what new comps this patch has to offer. I’m hoping that we’ll be able to unearth some new and exciting viable comps!