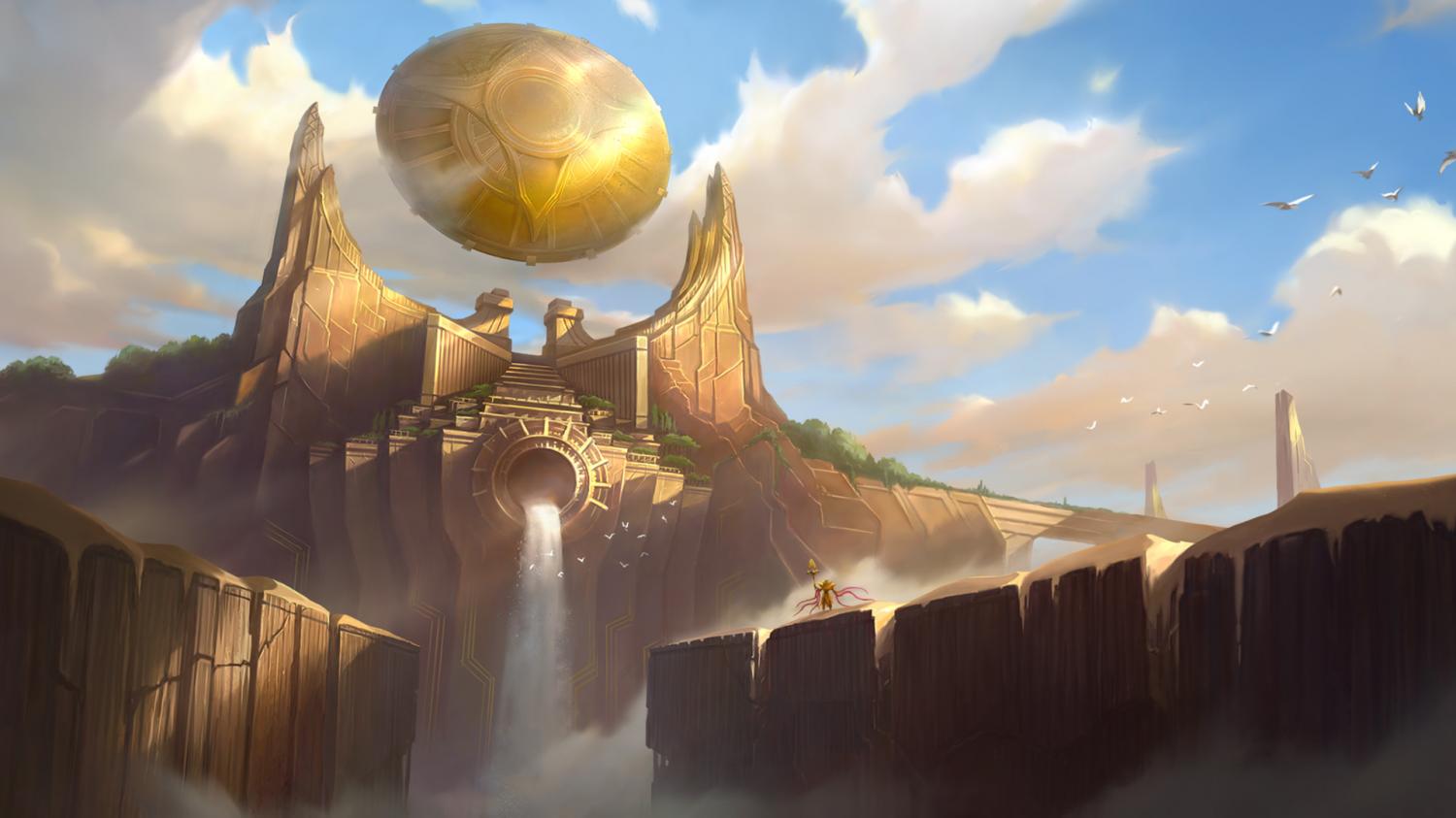 The Empires of the Ascended Seasonal Tournament has concluded and Erigby has been crowned our North American champion, earning him a clean $10,000 for his victory.

Day 2 of the Seasonal tournament consisted of the Top 32 players who would have to fight through 5 single elimination rounds.

Let’s take a quick look at what decks we saw on the day, and then we will take a deeper look into the individual rounds that were covered on the broadcast of the official Legends of Runeterra channel.

Two decks going into the weekend were known to be the decks to beat:

Both decks were highly represented in the competition, but not to the heights expected from the open rounds. Other Zoe decks made a significant splash, especially Lee Sin / Zoe.

Demacia Aurelion Sol decks had quite a showing, but they were split between variants with and without Zoe.

The headline of the event must be the dominance of Thresh Nasus, taking more spots than even pre nerf TF Fizz from last Seasonal, and has even received its own nerfs as of this article.

The broadcast starts with the most successful Seasonals player, Wraptero. While many people remember the winners of the events, Wraptero is one of only a handful of players to participate in all Seasonal top 32s so far. He is playing against FloppyMudkip who is a strong player from ladder, and regularly performs well in community tournaments, but this is his first appearance in top 32.

The players start with a classic matchup from the previous Seasonals format, fresh from the nerf bat; FloppyMudkip’s Twisted Fate / Fizz vs Wraptero’s Lee Sin / Zoe.

Wraptero has a slow start, having no plays to the board available until a T4 fangs, and FloppyMudkip is not one to ease up on the pressure. An early poro cannon starts providing chip damage, but the real threat is a turn 4 Twisted Fate backed up by double Pick a Card. Flashbacks to Turn five levels are aplenty, but luckily for Wraptero, FloppyMudkip does not find the Rummage + Stress Testing needed and Wraptero is able to challenge the Twisted Fate with a Serpent.

However, FloppyMudkip did manage to find a Mystic Shot for the serpent, forcing a Deny from Wraptero, which is met by a Get Excited, saving the champion.

FloppyMudkip is still missing the last few draw effects to level Twisted Fate, but picks up a rummage off a Wiggly Burblefish, and manages to get the level up with no available plays after. Wraptero, plays Lee Sin, and on his turn open Hushes the Twisted Fate, and challenges it. FloppyMudkip simply plays a second.

Wraptero simply can’t fight through the advantage gained from Twisted Fate alone, but to cap it all off FloppyMudkip has Mind Meld on the next turn to close out the game.

Wraptero opens with a Zoe, but FloppyMudkip has Trifarian Gloryseeker to contest the board, Calibrum off a Gifts from Beyond answers it, and an Eye of the Dragon is developed.

FloppyMudkip uses a culling strike on Eye of the Dragon, and a second copy hunts down Zoe shortly after.

FloppyMudkip is looking light on cards, but has a timely Trifarian Assessor to refill in time to fight against Wraptero’s Lee Sin. Ashe comes down, threatening to prevent Wraptero from blocking the large units from FloppyMudkip. Lee Sin challenges Ashe in an attempt to kill her, but Flash Freeze -> Hush -> Harsh Winds and FloppyMudkip manages to save his champion.

FloppyMudkip connects with the crystal arrow, and Wraptero is forced to use double Pale Cascade and Sonic wave just to allow his units to block, preventing Lee Sin from even threatening lethal next turn. Floppy Mudkip has a second Ashe to redevelop, and simply attacks for the win.

The players start on a Matchup no one would have predicted for the top 16, Deep vs Aphelios Diana.

Both players take it slow to start, WhatAmI breaks the ice with a turn 3 naked Aphelios, and Random plays double Lure of the Depths into a 0 mana Sea scarab.

The mana discount from the Lures, also allows Random7 to open play Devourer of the depths Obliterating Aphelios, WhatAmI then develops a Mountain Scryer.

Both players solve their issues at that same time, with Random finding a Dreg Dregers, and WhatAmI finding a Starshaping for the Immortal Fire, unfortunately for WhatAmI, the Nautilus enables Riptide cleanly answering the Celestial Elusive, and sea monsters easily close out the game.

Random has T1 Zoe getting a Starchart, but Duskpetal Diana from WhatAmI stops the snowball.

WhatAmI continues to develop, and Random uses a Serpent from Starchart with a Mentor of the Stones to try and regain board control, but a timely Moonlight Affliction kills the challenger, and denies the gems from Mentor.

WhatAmI Turns up the pressure with a Turn 6 Destroyer thanks to Scryer, but Random uses the window to develop Lee Sin, without a way to protect it, the Lee is answered by Falling Comet, but a second Lee replaces the first.

WhatAmI has managed to solve the problem of Lee Sin, but Random has already moved onto a Zoe elusive plan, and gets elusive and lifesteal on the entire board thanks to a levelup and Sparklefly. WhatAmI makes one last push with a Living Legends off Starshaping, finding Great Beyond, but the full board of lifesteal elusives is just too much to handle.

The players start with Ashe / Leblanc vs Thresh / Nasus.

Tenryx has an aggressive opener with Baccai Reaper into double Fading Icon, but an Avarosan Sentry and an Avarosan Trapper completely blunts the aggression. Tenryx tries to break through with Thresh, but a culling strike from FloppyMudkip shuts out that plan.

Floppy manages to set up Trifarian Assessor drawing 3 cards, pulling ahead in cards but Tenryx has a 10 attack Nasus to fight for the board, which Floppy is unable to prevent from leveling. After the level, Floppy manages to kill the Nasus with Icevale Archer and Culling Strike after popping the spell shield, but Tenryx just plays a second copy.

Floppy kills the second copy with Shunpo for the Spell Shield into Icevale Archer + Reckoning, leaving both players with an anemic board, but Floppy has the resources to redevelop.

With only one Nasus left to find, Tenryx simply can’t contest the board and dies.

Floppy Trades a Fizz into a Dunekeeper to make use of the second copy in hand, then uses poro cannon to trade with two fading icons.

Tenryx has very little going on, with both Rites of Negation and an Atrocity in hand and nothing really to do. Floppy is already spamming out elusives and puts Tenryx to 4 on Turn 6.

Tenryx attacks, but Floppy just blocks, the damage has already been done, and is threatening lethal with a fizz already. Knowing one card of two cards in hand is a Chum the waters, Tenryx atrocities to kill the fizz, hoping for anything other than a spell, but Floppy has Pick a Card to save the Fizz.

With the Fizz staying in play, Floppy trivially finds lethal next turn.

The players start on Trundle / Lissandra vs Tahm Kench / Soraka

Pasquale draws both champions early, but is missing the crucial star spring. An early Star Shepard does connect for meaningful damage.

Random has access very quickly to all of the parts of the combo, Trundle for Ice Pillar, Fading Memories, Lissandra and Spectral Matron. Radom even has access to Ruination on Turn 6 to clear the pressure Pasquale was presenting.

Thanks to the early Star Shepard, Random is already at 6, and takes 4 down to 2 on Turn 7, Random works to present the combo on Turn 8 but due to board space is unable, and unceremoniously dies on T9 due to not having enough blockers available, closing out the game in an extremely unexpected fashion.

Pasquale moves to Thresh / Nasus and finds difficulty applying early pressure. The few units he manages to present are easily handled by a blighted ravine. Pasquale then redevelops with a Thresh, which is blockaded by Trundle.

Pasquale then goes wide with small units, wagering that if Random wants to sweep, he will have to allow Thresh to level. Both of these occur, Random avalanches, but immediately kills Thresh via an ice pillar granting Vulnerable.

A replacement Thresh off the top pulls a Nasus out of the deck but falls short of lethal by a single point of damage. Random Watcher combos on the next turn, closing out the game before any chance from Pasquale to find the last point of damage.

Pasquale has an excellent aggressive start with Dunekeeper into Ravenous Butcher, but double Dreg Dregers completely stops that. Pasquale has no fodder after that, and Random immediately starts getting sea monsters and deep online.

Pasquale also starts working to the late game with both champions, but random gets deep. Pasquale attacks with nasus thanks to thresh, and levels one up. The Nautilus and Nasus trade but a Riptide from Random7 leaves Pasquale with no significant board.

Maokai hits play already leveled, decking Pasquale on the spot. While Pasquale has 4 cards to draw, his only way to win the game is Nasus + atrocity, but Maokai ensures the third Nasus can’t be drawn.

The players start with Dragons vs Deep, which no one would have predicted for a matchup in the grand finals. Erigby is missing early units to play, while Random has two Sea Scarabs, and finds a third and fourth Sea Scarab off two copies of Jaul Hunters.

Finding so many copies of Sea Scarab means Random goes Deep on T6, but already has two sea monsters in play when he goes deep.

Reaching late game, Erigby plays an Eclipse Dragon, getting 7/7 for 7 mana. Random Responds with Nautilus into The Beast Below, for a slightly larger total of 20/20 for 7 mana.

Erigby tries to interact enough to keep in the game on the next turn, but Random plays 5 sea monsters in one turn and just brute forces through Erigby’s interaction.

Random Moves to Lee Sin for the next game

Erigby has the missing early units this game, with double Dragonguard Lookout, and a Shyvana to cap off the aggression.

Random is lacking on early drops of his own, with all of them either dying to the challengers, or single combats. Random does have access to double Concussive palm to work on stabilizing and develop a Lee Sin on turn 7. Erigby responds with Eclipse dragon, and when Random goes for a sunlight blade on Lee, Single Combat from the dragon eats Lee.

Without a Lee Sin, Random has no way to contest the board on Turn 8, and simply dies to the attack on Turn 9.

Erigby has a slow start, with Solari Priestess coming down on Turn 3 and 4, but Random has an even more anemic start. Gifts from beyond hits sparklefly not Eye of the dragon leading into mentor of the Stones with no unit to pump after a thermo clears the Sparklefly.

Erigby continues to have pressure with Vi into The Warrior, while Random’s strongest board ever is a single 3/3 Sparklefly.

Hush keeps Random Alive from a 10/4 Vi, but without any units it's simply too hard to make real progress on the board.

Random needs to draw Lee on Turn 7 to even have a hope of staying in the game, and after he misses, simply dies to the open attack.

After 5 high intensity matches, Erigby battles back from the brink of elimination in grand finals to be crowned the NA Seasonal Champion. Runnerup Random7HS, and Semifinalists FloppyMudkip, and Pasquale are qualified for Worlds off their performance in this event, and all the participants in the Top 32 are in good position to qualify off Seasonal points.