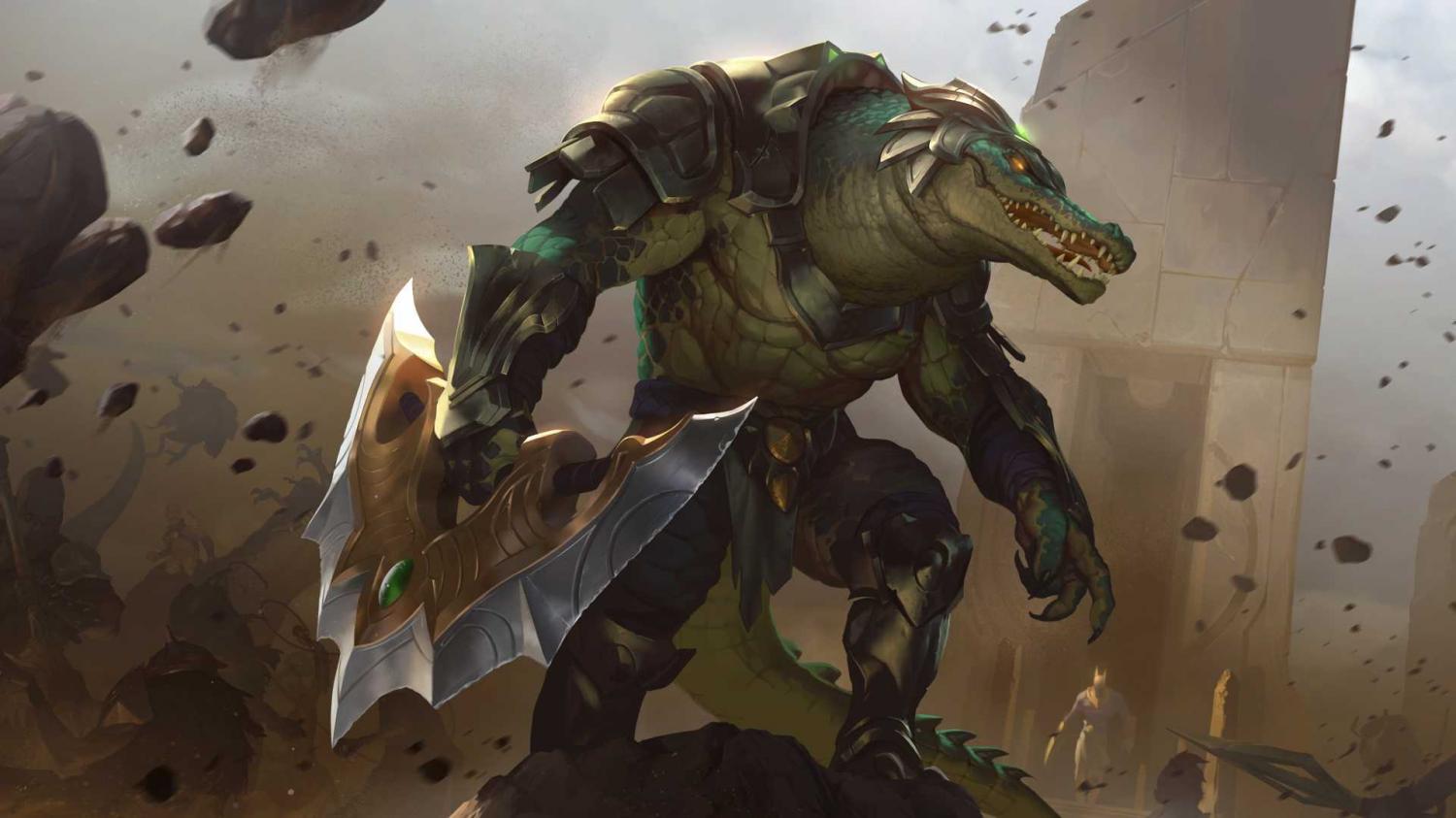 Hello everyone and welcome to the Empires of the Ascended Road to the seasonal! I am Blevins (yes you can now point all of your criticism of the writeups directly to me) and I will be bringing you the GiantSlayer Top 10 players to watch list for the upcoming Empires of the Ascended Seasonal tournament. This list is a combination of strong ladder players as well as players who have performed well in tournaments. As always, this list is only for players who will be playing in the Americas Seasonal. If there are players who you think should have been on the list, hit us up on Twitter!

Sqweeby is the first newcomer to the list. I knew Sqweeby as a content creator and streamer and not as much as a tournament player, but that perception changed quickly. After some day 2s  in some open events, Sqweeby came on to our GiantSlayer Fight Night event a few weeks ago and pulled off an absolutely legendary loser’s bracket run. Sqweeby has traditionally favored Targon and other control decks, but a top 100 ladder performance has been achieved via the classic discard aggro. Sqweeby is a  relative newcomer to the LoR tournament scene, but their success has been stacking up recently.

Storm is a player that I honestly am not super familiar with. They are an OCE region player, specifically from Australia. Storm has been floating in the top 3 on the Americas ladder and is one of the few players to crest the 1000 LP mark, which I'll be referencing a bunch throughout this list. Of course, the IRL time of the event is absolutely not conducive to their schedule, but let’s be honest; 2 a.m. and later are peak gamer hours. All jokes aside, Storm may be a bit of a dark horse coming into the Seasonal this weekend, or at least as much of a dark horse as someone who’s the number three ladder player can be.

At this point, BBG really doesn’t need much of an introduction. The old school (we’re coming up on the one year, I can say that now) LoR tournament community knows him as arguably the most successful tournament player during beta and the early release days, but most now know him as one of the most prolific streamers in Legends of Runeterra. The streamer moniker sometimes has the connotation of ‘bad player’ but that of course is not the case. BBG not only keeps up his tournament performances, albeit not as frequently as the old days, and also is one of the other players to have hit 1k LP this season. BBG generally loves to play midrange Demacia decks, and those have been a bit on the rise lately. BBG has made good runs the past two seasonals, IIRC he was the 33rd seed last season, so this season just may be his time to make the top cut.

Finni is the first Brazilian player on the list. As many know, the Brazilian community is one of the strongest regions in Legends of Runeterra, and Finni is absolutely no exception. Finni is part of team Sultans who have put up some good results in Brazilian tournaments. Finna notably is also sitting at number 4 on the Americas ladder. Finni is always near the top of the ladder, but to my knowledge, this is one of their first consistent pushes into the top 5. Getting to and staying in the top 5 is a labor of love and really a next-level commitment to the game. An already great player making this jump is definitely someone I want to be keeping an eye on this weekend.

Mtucks is another familiar face in the competitive community. Always at or near the top of the ladder, and also in many of the competitive player circles. Mtucks recent deck may say discard aggro, but he is known for popularizing the Teemo / Ezreal Freljord deck that ends up being a meta pick from time to time. The last few weeks have caused a bit of craziness in the Meta with a large range of decks being playable. There have been quite a few aggro decks that have popped up, so this very well could be a spot to fit in Mtucks’ signature deck. Either way, expect good things from Mtucks this weekend.

Random7 is another long-time tournament player. Many in the community may remember their reign in the days when Deep was a new deck and was quite dominant. While this was closer to the release of Rising Tides, if we flash forward back to modern times, we see a very viable Deep deck being played by many players, including Random7. Could this potentially be the rebirth of Deep into the competitive meta, and if so is Random7 its herald?  Deep players and fans are definitely going to want to be tuning in this weekend to see how they fare with the deck.

Cephalopod has been on the previous two top 10 lists. The first Seasonal, Ceph notoriously missed registration (I still believe that he slept in), and in the second Seasonal he did alright but didn’t make the top cut. Is the third seasonal swiss the one where Ceph makes the jump into the top cut? I can’t be sure, but what I am sure of is that Ceph has 2 accounts with over 700 LP. I’m not quite sure why he decided to bring two accounts that high instead of using 1 account to grind more LP, but regardless of the reason, the feat itself is quite impressive. Cephalopod is also one of, if not the most experienced LoR tournament players which cannot go unnoticed. Cephalopod knows and understands the nuance of Legends of Runeterra tournament play from deck construction, lineup choice, and just preparation in general. He is certainly someone who you can expect great things from… if the alarm clock actually works this Saturday.

NicMakesPlays is another who really needs no introduction. He is one of the top streamers in LoR, and also is commonly one of the first players to hit Masters on the Americas shard. Nic has gone above and beyond this season not only on ladder, again being one of the few 1k+ LP players, but also having top 8’d the Mastering Runeterra $1k event last weekend. This was the largest event we’ve had for Runeterra since the last Seasonal and was also the same format as the upcoming Seasonal. Nic also popularized the more aggressive version of Thresh Nasus that was the most represented archetype in the Mastering Runeterra event. Nic has always been a top streamer and ladder player, and I would not be surprised to see him make a big splash in the Seasonal this weekend.

As many of you know, Ian was the runner-up of the previous Seasonal. Ian is a rare breed of player who has both been around forever and also continues to put up top results in tournaments. Honestly, Ian was a miracle play by Majiinbae away from being our Seasonal champion last season.  Regardless of the actual result, Ian demonstrated the highest level of play in Legends of Runeterra thus far. Many already will be watching Ian, but if you weren’t already planning to, you should.

Last but not least is a player who not only made the Top 32 of the last Seasonal, but also wins my award for the silliest name on the list. Regardless of their in-game handle, their level of play is unquestionable. They are currently number 2 on the Americas ladder and also currently the number 1 player from North America on the Americas ladder. What’s really crazy is that their recent deck is Twisted Fate / Fizz. This would have been very common last season, but after the recent nerfs to Twisted Fate and Wiggly Burblefish, we’ve seen much less of it at the high levels. Perhaps TF Fizz is still good and we’re all sleeping on it. Weeb has not been sleeping on it, and we certainly shouldn’t be sleeping on him.

And with that, we have our top 10! Before I sign off, I wanted to bring up a couple of honorable mentions. The first of which is one that I’m sure is on most of your minds, the reigning Seasonal champion, Majiinbae. The reason I didn’t put him in the top 10 is simple: I mean what are the chances someone wins two seasonals in a row?!?!?!?!... I’m kidding. In all honestly, we have more on Majiin coming soon, so I didn’t want to take a spot from someone else who we could feature.

The other honorable mention here is MrEmoetional. Moe did what he tends to do which is start off the season very strong, I believe having over 800 LP at one point, but the close of the season is a toss-up for him. At the time of this writing, Moe is technically not qualified, but he did top 16 in the Mastering Runeterra event. Moe is a great player, streamer, and coach and is definitely deserving of a spot, but I’m only giving spots to players I know will qualify ;).

And that’s that! This weekend should be a fun one as always. Again, if you have any players that I missed, feel free to tweet at either @GiantSlayerLoR or me directly @the_Blevins. And don’t forget to check out the broadcast on Saturday at Twitch.tv/GiantSlayerLoR.