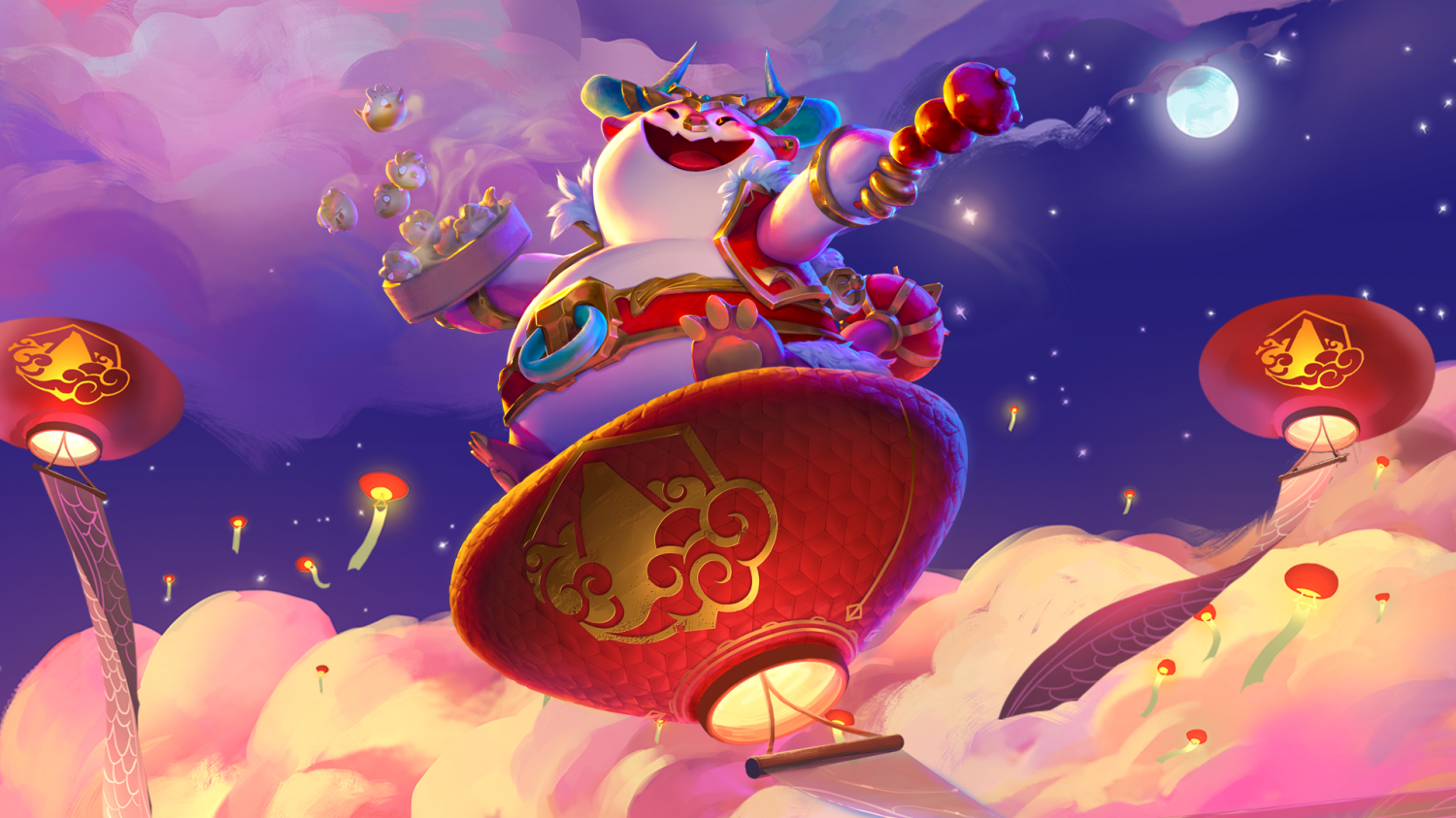 The final weekend of the NA Fates Regional Qualifiers kicked off on Saturday.

Weekend 2 followed the same format as the previous week, with each participant playing a total of six games in lobbies that rotated every two rounds.

By the end of the day, our 16 players were reduced to eight. When the dust settled, the eight that remained were:

On Sunday, the players strapped in for what would be six of the highest-stake games in their TFT careers. NA's four representatives for the TFT: Fates Championship would be decided today. We followed the game winners to find out how they claimed each victory.

Ramblinn played an early Chosen Nasus Syphoner with Divine + Vanguard. He leveled to 7 and rolled down to find a Chosen Dragonsoul Shyvana. He sold his Shyvana at the next NPC round and transitioned into Dragonsoul Mage. He also found an Ornn at this time. In the following round, NoobOwl ended Ramblinn's 10-round win streak.

At level 8, he finally settled on a Chosen Fortune Sejuani. He econ’d back up and leveled to 9 after the stage 6 carousel. He rolled and found a Chosen Aurelion Sol. When it came down to the Top 3, he lost to Kurumx’s Olaf Slayer comp's ghost, but Kurumx himself was taken out by Agon’s Assassin Spirit Diana comp. In the final round, his Aatrox played a key role, pulling Agon's cornered units into Asol’s lightning breath.

Coming off on an 8th in Game 1, Mismatched Socks was looking for redemption. He picked up an Assassin Diana, building Morello as his first item. He played Spirit Assassin until he swapped it out for a Chosen Irelia at level 6.

He played Irelia with Vanguards as his frontline with Spirit Sharpshooters at the back, passing the Morello over to Tristana. He held 4-cost Slayers and finally sold his Irelia at the NPC round at the end of stage 4.

He ended up with a Chosen Cultist Aatrox and was able to two-star his 4-cost Slayers. He added in Lee Sin for the Duelist synergy and his punching prowess.

When it came down to the Top 3, Ramkev’s double Aurelion Sol in a 6-Dragonsoul Mage comp managed to take a round off of Socks. But NoobOwl’s 9 Dragonsoul (Sett) took care of the Ramkev problem in the following round.

In the final battle, Socks positioned his Lee Sin to knock Sett into the rest of his friends. But Sett slammed down hard on Lee Sin and Aurelion Sol followed up, taking out most of Socks’ team. However, the Slayer duo was able to take out the weaker Dragonsoul units while Sett tried to chase down the ever-elusive Tryndamere. Once Olaf and Tryndamere finished up their friends, they took down the mighty Brawler and secured Game 2 for Socks.

Coming into Game 3, Kurumx and RamKev led with 13 points. They were followed closely by Agon (12 points), Socks, and NoobOwl (11 points each).

Kurumx played an early Chosen Mage Twisted Fate (TF) into Mage + Keeper. His intentions were clear as he built Rageblade and Rapidfire Cannon (RFC) on his TF. At level 7, he sold the TF and switched into a Kayle Executioner comp.

He found a chosen Kennen and went up to 4 Keepers. At level 8, he dropped the Keepers and played a Chosen Fortune Sejuani. After this point, he didn't lose a single round.

He two-starred his Lee Sin at level 8 and swapped out his Irelia. In the final round, he knocked out Socks’ Legendary Elderwood comp, while Socks’ ghost took out Ramkev’s 6-Slayer Samira. Kurumx ended the game on a 7-round win streak.

DQA started the game by slamming RFC on his Chosen TF. He sold his TF and moved his items to Kalista, playing a Cultist board without a Chosen for several rounds. At level 6, he rolled down and found a Chosen Akali to hold the game-winning RFC. He played Irelia and Jax as his frontline.

At level 7, he sold Akali and put in Kayle as well as Kindred and Yuumi. He played without a Chosen until level 8, and it certainly showed, as he dipped down to 7th place with 22 HP.

On his level 8 rolldown, he was able to find a Chosen Divine Kayle and played 4 Divine. He went down to 4 HP when he met Agon’s Spirit Sharpshooter comp. He also came extremely close to losing against Socks' Legendary Elderwood comp, but Kayle managed to take out Socks' Xayah before her feather daggers were recalled.

His two-star Blue Buff Lee was highly instrumental, punching out key units including Ramkev’s otherwise unkillable 3-star Nasus in multiple fights. In the final round, Socks zephyred Lee Sin, but Rageblade Kayle was able to ramp up and carry DQA to victory!

By Game 5, the point disparity had started to increase. RamKev led with 28 points, while Kurumx and Socks followed closely with 26 points apiece. But the gap between them and the next high players was six points.

NoobOwl played an early Duelist comp with a Chosen Mystic Janna. He dropped to the bottom of the lobby, enabling him to pick up a bow-wielding Kayle off of the stage 3 carousel.

He transitioned into a Kayle comp and put in 4 Mystic to counter the lobby's heavy magic damage comps; he also had two Shrouds.

The lobby was extremely close! At one point, with six remaining players, the highest had only 17 HP. In the round that followed, half of those players were eliminated and only NoobOwl, Robinsongz, and Ramblinnn remained.

In their first 1v1, it came down to Lee Sin versus Aurelion Sol. It was as close as it could get. Lee Sin had Aurelion Sol up against the corner, but Asol cast its ability as Lee was winding up his punch, knocking NoobOwl down to 3 HP.

In the final round, Irelia’s Thief’s Gloves rolled a Shroud, enabling NoobOwl to Shroud the entire board and take the game.

Coming into the final match, it was still anyone’s game. There was only a five-point difference between the first and sixth place. Socks led in points (30) while RamKev and Kurumx were one point behind. DQA and Ramblinnn both had 26 points and were definitely still in the running for a spot at Worlds!

Kurumx played a Cultist board with a Chosen Elise. He added a Keeper and a Brawler pair until he was able to complete his 6 Cultist board. Kennen was his preferred Keeper and at level 7, he added in Jax for Duelist.

At level 8 he added in Orrn and swapped out his Kennen for Azir. His 11-round win streak was ended by Agon’s Sivir comp. Kurumx then preserved his econ and leveled to 9. Once there, he dropped down to 3-Cultist and found a Chosen Sharpshooter Samira!

He added in Slayer and padded his board with 5-cost units. It wasn’t even close as his board ran over DQA’s Kayle comp in the final round to win the game and the tournament!

Off of the back of his win in the final game, Kurumx overtook Socks in points and is our NA Fates Regional Champion! This was his first time to win a major tournament!

Mismatched Socks, RamKev, and DQA will be joining him in the upcoming $250,000 TFT: Fates Championship kicking off on April 7!

A huge congrats to them and we can't wait to see how they will perform at Worlds!