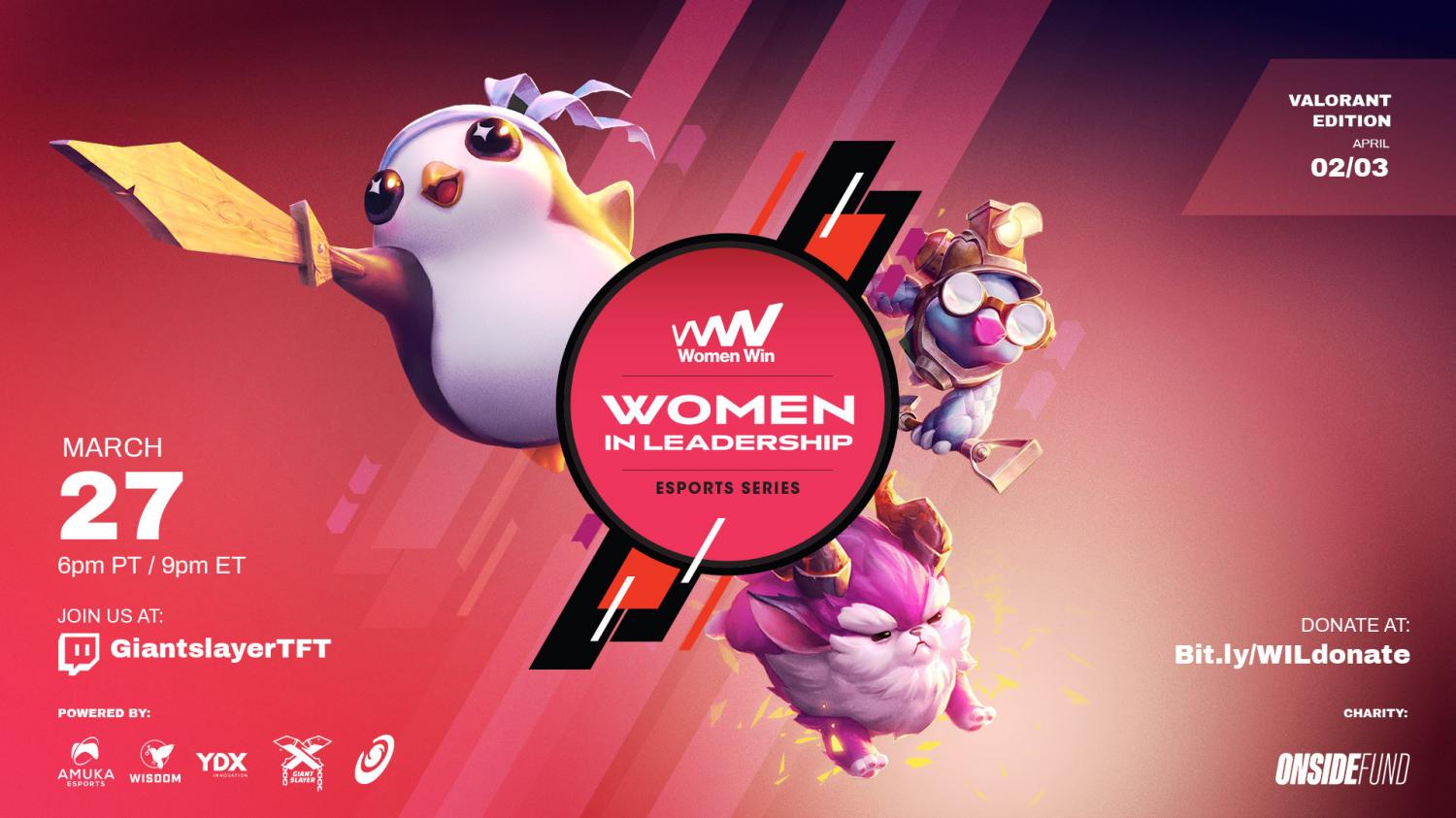 Upcoming on Saturday, March 27th, 2021, Giant Slayer will be holding the Women in Leadership TFT Series. The tournament will feature eight major players in the leadership of Teamfight Tactics. Each of the eight tacticians will be participating in a 5 round tournament to see which of these Master+ ranked players reign supreme. The event will take place at 6pm PT / 9 PM ET on twitch.tv/GiantSlayerTFT cast by NekkraGaming and ItsRissakah.

The event holds two main purposes. The first of which is to showcase a set of very skilled players within the TFT community. The second main objective of the event is to raise money for the charity organization* of @Women_Win. Not only can you follow Women Win on Twitter, but you can donate directly to the organization through the donation page.

Betsy (@betsyb0t) is 441 LP in Grandmaster. Betsy streams quite a bit playing TFT, Valorant and even making art!

Emily (@HappyMuffinn) currently sits in Master Tier with 219 LP and has been playing Teamfight Tactics since Set 1.

Yi (@Yiggles) is a Challenger TFT player that does most of their climb off-stream. She has participated in multiple tournaments in the past, such as Fight Night: Rising, TL Open Qualifiers, and Fates Qualifier 1.

Luna (@lunaloveee8) on the other hand is not just a professional TFT player with an impressive 667 LP in Grandmaster, but also holds two American’s GM Championships for Hearthstone!

Emily Wang (@emilyywng) is the fifth competitor in this charity event being both a Twitch and League Partner . She holds 585 LP in Grandmaster, not too far behind Luna.

Sarah (@Sarsarcha) takes the sixth seat at the event. While currently in Diamond 1, Sarah has peaked at Master with 189 LP in this Set with constant success throughout the other Sets.

Participant number seven goes by Candy (@i_Candyyy). She mostly streams Teamfight Tactics and sits at a healthy 564 LP in Grandmaster.

The final tactician in the charity tournament is Jane (@janee_liuu). She sits at 484 LP in Grandmaster and has been playing since Set 2.

Giant Slayer hopes to promote more positive growth in the Teamfight Tactics and esports scenes for women in the industry. By teaming up with Women Win and these large names in the Teamfight Tactics community, GSTV shines a light on this endeavor. This event is the first in a series of events to help guide people into working towards a similar goal. If you are a fan of Valorant, Amuka Esports is currently planning on gathering a similar group of Valorant players to work towards the same goal.

“The ONSIDE Fund is part of the broader ONSIDE Initiative which envisions a world where all girls and women exercise their right to play. ONSIDE Gaming will specifically seek out initiatives that promote and advocate for gender justice to and through esports and gaming.

Women Win is a global multi-dimensional women’s fund guided by the vision of a future where every girl and woman exercises their rights. Women Win supports all girls and women, and more intentionally those from minority and underrepresented communities such as black, indigenous, mestizas, people of colour, and LGBTQI+

Women Win advances girls’ and women’s rights amidst the scarce resources that are available for the feminist movement. We achieve our vision through two main areas of work: Girls’ rights through sport and play, and women’s economic resilience.

Since 2007, and thanks to our implementing partners, our grassroots programs have impacted the lives of over 4 million adolescent girls and young women in over 100 countries. Through sports and play, we help them build leadership skills and become better equipped to exercise their rights. We focus our work on three areas that are key to advancing girls’ rights globally:

Women Win’s strategic aim is to bridge the gap between the virtual and physical “pitch” by using the power of gaming and esports to create social change that empowers girls and creates more gender equitable communities, both on and offline. Our work is deeply rooted in the belief that the complexity of gender inequity means that no one can effectively tackle it alone. We understand that partnerships and strategic alliances are essential to achieving girls’ rights globally.

Their focus is to allow for women and girls to exercise their rights around the world. Women Win achieve their vision through two main approaches, GRLS and Win-Win Strategies. The GRLS program incentivizes growth of female rights through sports. The Win-Win Strategies group works to power businesses with the assets and funds of women led organizations.”